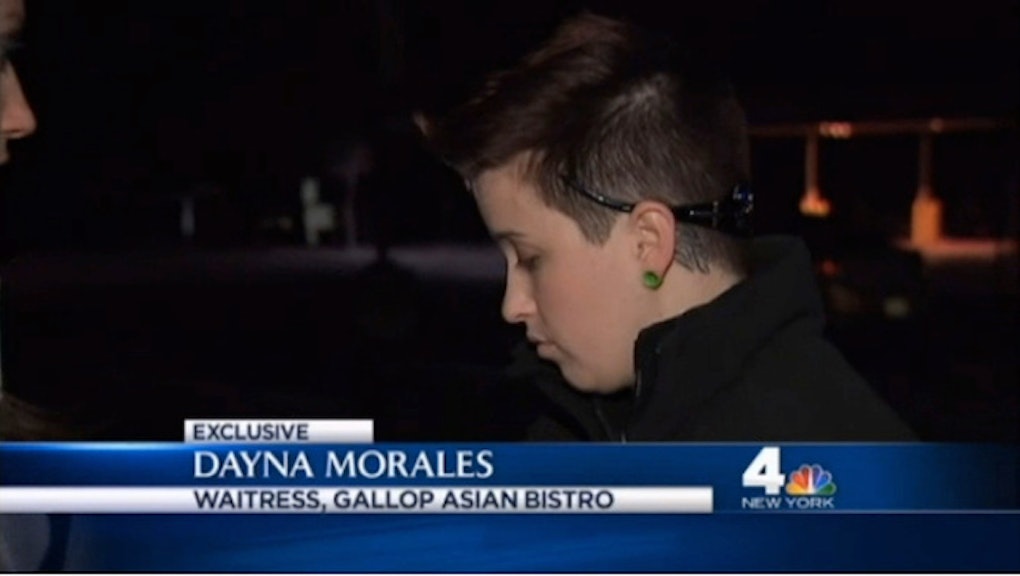 This Gay New Jersey Waitress Might Have Made It All Up

The news: Remember that waitress that claimed to have gotten stiffed on a tip with a written note criticizing her lesbian lifestyle? Turns out that she might have made the whole thing up for attention.

According to various media sources (some more credible than others), friends and acquaintences of 22-year-old ex-Marine Dayna Morales are saying the purported anti-gay missive was a lie and that she's a compulsive liar. And the couple that supposedly slurred her lifestyle has come forward to challenge her account of the events.

Here's the image of a check she posted:

And here's a copy of the check the couple, who wish to remain anonymous, provided to WNBC ... complete with a 19% tip:

I am THOROUGHLY offended mad pissed off and hurt that THIS is what her kids will grow up learning and that I served in the Marines to keep ignorant people like them free. Sorry lady but I don't agree with YOUR lifestyle and the way you're raising your kids but you didn't see me throwing that in your face and giving you shitty service. Keep your damn mouth shut and pray we never cross paths again.

Morales reportedly raised over $2,000 in donations from various well-wishers after her story went viral, which she said would be given to the Wounded Warriors Project.

Who's saying it was a lie? Both the couple that paid their bill and, it seems, a lot of former friends.

"We've never not left a tip when someone gave good service, and we would never leave a note like that," the wife said (she and her husband requested to be anonymous), adding that she could not have made the slash in the tip line because she's left handed.

"Never would a message like that come from us," her husband said, before noting that he and his wife support gay rights and refused to vote for New Jersey Governor because of his stance against gay marriage. "It's a disgusting thing to do," he added. "The restaurant profits from this, obviously Dayna profits from this. It's fraud, it's a scam."

Friends told the Daily Caller and The Journal News of White Plains, N.Y. that Morales had previously lied about her military service and that she had claimed to have been "blown up by a land mine." (She wasn't.) According to those same friends, she lied about serving in a combat role in Iraq, a rape and subsequent pregnancy, and damage to her home from Superstorm Sandy.

Why it's important: There are two major takeaways here, whether or not the claims that Morales is a liar are true. The first is that viral stories aren't always what they seem and should be approached with a healthy degree of skepticism. Some people are jerks with agendas and media outlets have an interest in pumping up stories for clicks and pageviews.

The second is a little more ominous. A quick look at the comment sections on various websites show the degree to which people who don't respect the LGBT community very much are dogpiling on the allegations as yet more confirmation of their bigoted views. That's not cool, and it shows that there are still a lot of people out there whose views on nontraditional lifestyles haven't evolved very much.