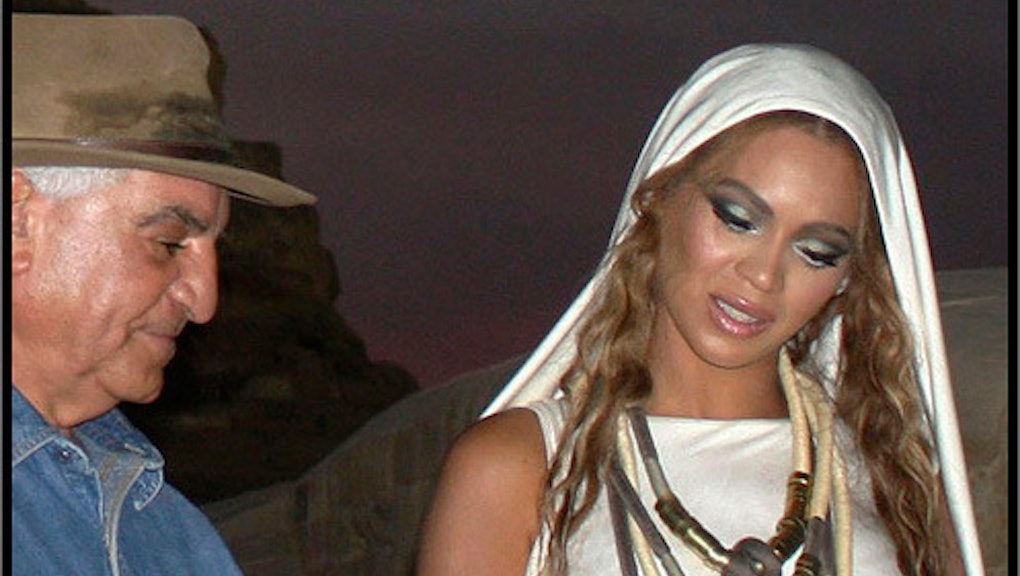 Meet the Man That Banned Beyoncé From the Pyramids

As the year closes on what can only be considered a monumental year for Beyoncé — a heralded Super Bowl half-time performance, a biographic documentary, and the highly successful Mrs. Carter world tour — the first negative rumor has appeared on her otherwise immaculate image. Dr. Zahi Hawass, Egypt's former Minister of State for Antiquities (popularly known as "Egypt's Indiana Jones"), refused to admit Queen Bey into the great pyramids, claiming she was not only late, but also rude.

In a recent interview with British publication The Independent, Dr. Hawass revealed that in 2009 Beyoncé had scheduled a guided tour with Dr. Hawass, but struck a nerve when she was both late and unapologetic.

"She said she would come at 3 p.m. but she came late. I said 'You have to say I'm sorry I'm late.' But she didn't open her mouth," claimed Hawass.

According to the doctor, the Beyoncé's poor etiquette didn't end there, continuing on to involve the photographers of both sides. He detailed:

Someone disliking Beyoncé, let alone calling her "stupid," may seem impossible to some at a time when her celebrity reigns supreme, yet this marks the second time Dr. Hawass has insulted Beyoncé. Both insults stem from her 2009 visit to Egypt, and it's very possible the Hawass is only revealing this information now to gain publicity for his new book Discovering Tutankhamen, which was released Nov. 26.

Hawass' action should not be surprising to those who are familiar with him and his notoriously protective attitude towards ancient Egyptian relics. As Egypt's minister of state for antiquities for almost a decade, he was the sole gatekeeper to all of Egypt's ancient historical sites and has banned several other people, including documentary filmmaker Joann Fletcher of the BBC.

For Hawass, who is arguably the world's most renowned Egyptian archaeologist, this hardly marks his first time encountering controversy. His recent history has been plagued by accusations of corruption, with accusations including  that he annually received up to $200,000 in bribes for granting access to Egyptian relics. Hawass maintains that all of his actions while in the ministry were done with government approval and fully legal.

"It was a contract. It was not a bribe," Hawass told Vocativ of his dealings with National Geographic. "No one can bribe me, I’m the most famous Egyptologist."