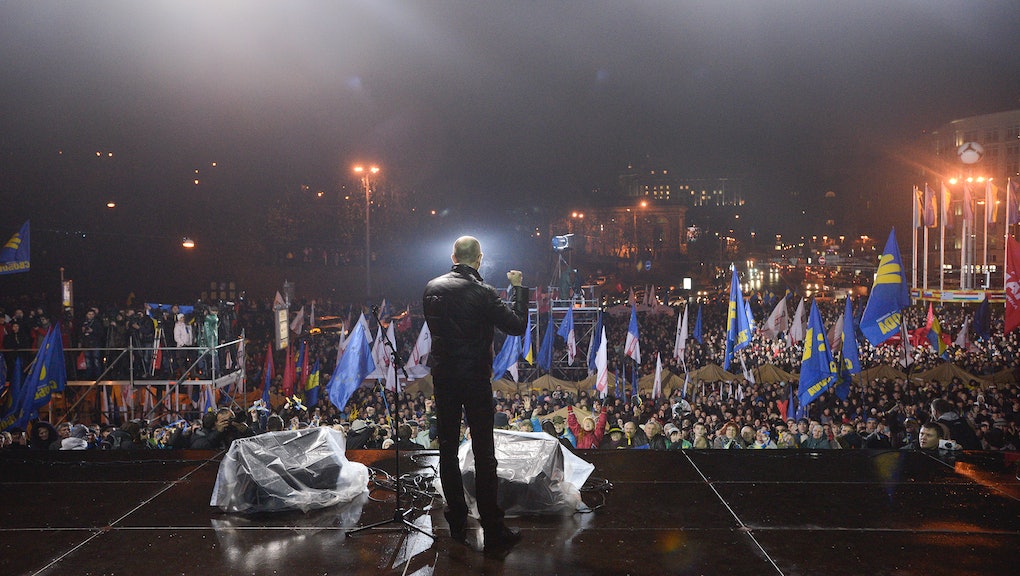 The Story Behind Ukraine's Millennial Revolution

At around 5 a.m. on Monday, a few hundred protesters were spending the night in Kiev's Independence Square, commonly known as Maidan. It is the central square of Ukraine's capital city, and on Sunday, 100,000 people had participated in a rally against the Ukranian president's decision to cut off a free-trade agreement with the European Union (EU) in order to strengthen ties with Russia. The authorities decided to block access to parts of the square under the pretense of putting up a Christmas tree and skating rink in the midst of defiant supporters of Ukraine's integration into the EU.

The absurdity of the scene indicates how the Yanukovych regime is attempting to "lightly" suppress the EuroMaidan movement, attack protesters when they are low in numbers, use court orders and administrative means to disband rallies, halt buses and cars traveling to the capital, ban assemblies due to an alleged flu outbreak (as the mayor of Kharkiv did) or in the worst cases, use tear gas, arrest people, and beat up activists. Yet, popular protests have continued for six days throughout Ukraine, and are growing.

What is happening in Ukraine represents a healthy reawakening in a young democracy where people are increasingly frustrated with the the current regime and are willing to live through painful reforms in hopes of improving future living standards.

But this is no Orange Revolution in the making. Rather, it is a youth-led movement of millennials largelyorganized through social media, similar to the Occupy movement. So how did it all begin?

On Nov. 22, 2004, the first tents emerged on Maidan, marking the beginning of the Orange Revolution that deposed the unpopular regime of Leonid Kuchma and his handpicked successor, current President Viktor Yanukovych. Having finally become president in 2010 after the failure of the Orange team, Yanukovych has faced a growing crowd of angry and disappointed people across the country.

This past week popular journalist Mustafa Nayyem, urged people via Facebook to come to Maidan and express their disagreement with government's Nov. 21 decision. The Ukrainian government has been negotiating these agreements over the last few years and was slated to sign them during the Nov. 28-29 at the Eastern Partnership Summit in Vilnius.

Officials ultimately decided to pause negotiations in order to strengthen national security, study the effects of EU approximation, and undertake actions to reverse the fall in production volumes. The drop is linked to the 2012 trade sanctions Moscow imposed on Kiev, which decreased Ukrainian exports to Russia,cost $4.2 billion, and increased unemployment in the eastern region of the country. Ukraine has some of the worst economic issues in Europe and needs an immediate infusion of capital to finance its current debts, pay state employees, and allow the state energy company, Naftogaz, to finance its purchases of the Russian gas that Kiev is currently obligated to buy under existing contracts, regardless of demand. The understanding is that the money will come from Moscow.

Some in government circles believe that halting negotiations will convince Moscow to lift the administrative sanctions, improve trade with its northern neighbor, and may even lower the price of gas. But it is unlikely that Moscow would be willing to do this without Ukraine giving something in return, like joining the Russia-led Eurasian Union (the new pet project of Russian President Vladimir Putin) or selling part of Ukraine's lucrative gas transportation system to Moscow. Alternative funding from the International Monetary Fund (IMF) could help alleviate the troublesome financial situation in Ukraine and prevent default, but the government refuses to undertake structural reforms in the energy sector and liberalize the economy, since reforms would likely negatively affect their presidential reelection prospects in 2015.

Crucially, while the pause in the negotiations with the EU is considered a temporary, tactical move in the eyes of the government. But the mobilized population thinks otherwise. For them, the move denies a historic opportunity to move closer to European standards of life, a strategic goal written into Ukrainian law in 1993. The majority of protesters talk about the EU as their future, and strategic orientation towards the union is considered a way to modernize the country, establish the rule of law, curb corruption, and ensure a better future.

The president did not sign the agreement at the Vilnius Summit despite popular pleas over the last eight days to do so, nor did he dismiss the government of Prime Minister Mykola Azarov, which was another popular demand. Currently, street protesters and the opposition are discussing a continued plan of action. In the meantime, the regime is building its covert efforts at managing and curbing protest activities by actively trolling in social media, committing cyberattacks of popular media outlets, issuing surveillance, and occasionally arresting different activists across Ukraine.

Oh, and lets not forget about the Christmas tree, which among all this commotion remains as carefully guarded by the police as the building of the Cabinet of Ministers: