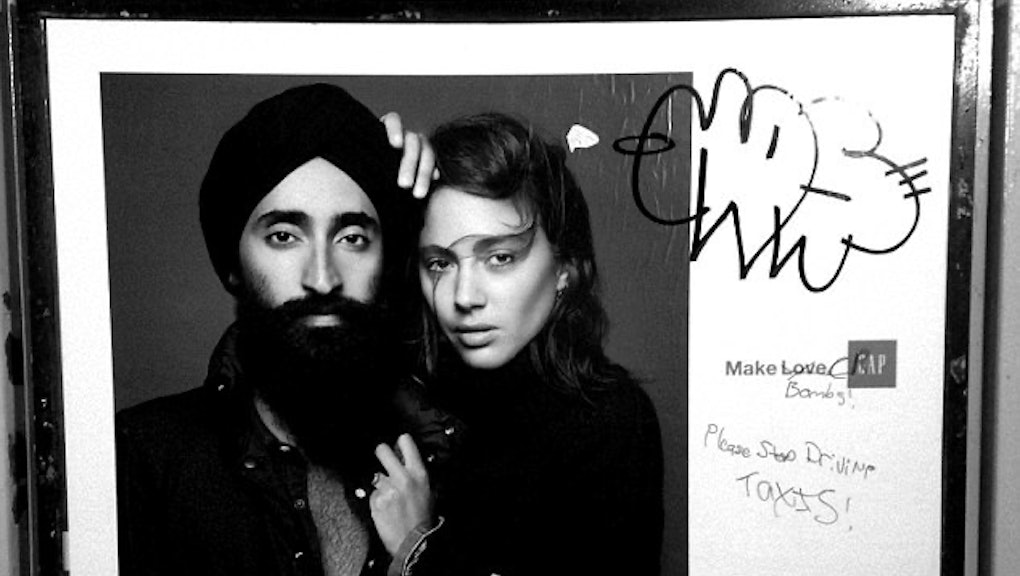 Gap Stood Up to Racism, But It's Time For Them to Address Labor Issues Too

After Arsalan Iftikhar brought the racist vandalism of a Gap ad featuring Sikh model and jewelry designer Waris Ahluwalia to Gap's attention via Twitter, Gap quickly responded by raising awareness of the incident and condemning the action. Shortly after Iftikhar's tweet, Gap responded asking for the location of the ad, and changed their cover picture to Ahluwalia's photo in solidarity. Many have applauded this action including the Sikh community, which has begun a "Thank you, Gap"  page to acknowledge Gap's efforts at increasing Sikh visibility in the fashion world. However, the real question begs to be asked: If Gap really cares about human equality, why doesn't it examine its own labor practices?

While the collapse of the Rana Plaza factory in Bangladesh seems so long ago, it occurred only in May. It was one of the most devastating accidents in Bangladeshi industrial history as the death toll rounded out to about 600 people. Prior to that, Bangladesh suffered another blow in 2012 with a fire in the Tazreen Fashions factory.

A 2011 proposal to create an "inspectorate" that would have the power to shut down unsafe factories in Bangladesh was rejected by big companies like Walmart and the Gap. A Gap spokesman specifically stated that the company didn't want to get involved with lawsuits or financial obligations to help with safety commitments.

Over the summer, Al Jazeera published a brutalizingly honest report about child labor practices in factories that produce clothing for Old Navy (Gap is the parent company). While Gap responded by saying that one of their contractors must have sold their product to a wholesaler without the company's knowledge, it is undeniable that there is limited oversight of the clothing's production practices.

While it might seem that Gap is gaining notoriety for its practices only in Bangladesh, it has engaged in similar practices in other countries as well. For example, in 2007, British newspaper The Telegraph raided a New Delhi factory in which children as young as 8 were sewing clothes for Gap stores. Gap has also been engaging with Korean and Chinese-owned factories on the U.S. territory of Saipan, employing young Chinese women in unsafe conditions and even forcing pregnant workers to get abortions to continue working.

Amidst this good PR, it is important to question how and if Gap can ensure 100% of its products are produced in safe environments by employees old enough to work. This complication spans beyond Gap's company practices, and addresses the overriding issue of globalization. As the worlds of capital markets and political climates become more and more intertwined, issues concerning safe labor practices and equality abound.

Should Gap ensure none of their factories engage in child labor? Or, should the company work with those countries to ensure child labor ceases to exist at all? While supporting Ahluwalia and fighting against racism are commendable acts, consumers must demand Gap and other companies look at the broader structural problems plaguing the clothing production and wholeheartedly attempt to rectify them.