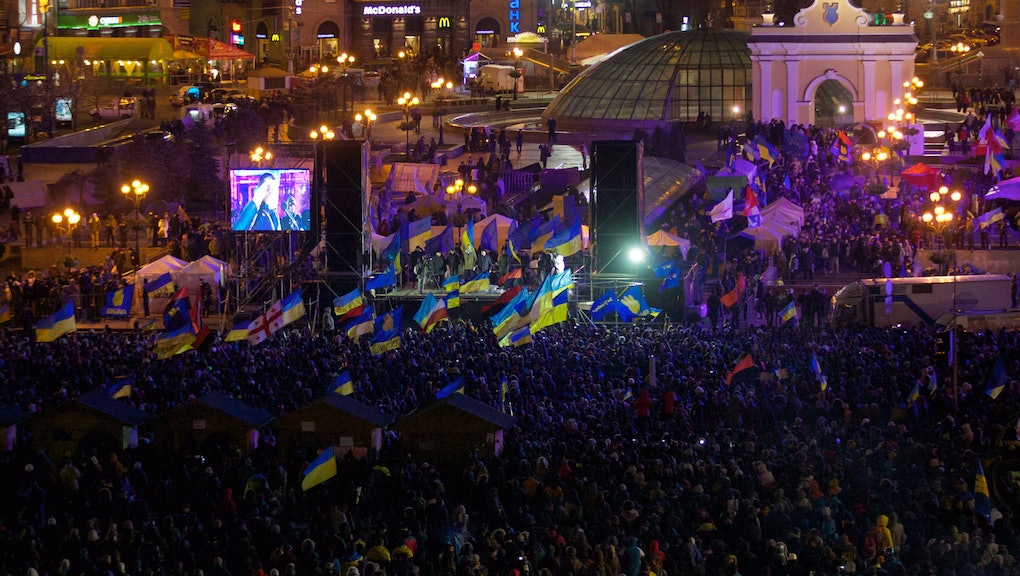 What Europe's Last Dictatorship Can Teach Us About Ukraine Protests

As the European Eastern Partnership Summit in Vilnius came to an end last week with some very unexpected results, European politicians and citizens have expressed outrage at Ukrainian President Viktor Yanukovych's last-minute decision to reject a proposed Association Agreement with Europe.

Hundreds of thousands of young, pro-European Ukrainians have taken to the streets of Kiev in protest. Despite this latest setback, most EU diplomats claim the European option is the only viable road to take if countries want to avoid political and economic isolation. But if we want to know what the future has in store for post-Soviet republics that choose to steer clear of Europe, we need not look further than neighboring Belarus where the man known as Europe's last dictator is keeping his country as isolated from the EU as possible.

Belarus is the only member of the Eastern Partnership without an agreement in the works for this year's summit. Recently most post-Soviet countries are taking steps to improve their relations with the EU. Both Armenia and Azerbaijan will make it easier for their citizens to obtain Schengen visas. Georgia and Moldova plan to enter into free-trade agreements with the EU.

Prior to this shift, the highest expectations were on the Ukraine as many believed the country would sign a broad free trade and political association agreement with the European Union. On the contrary, the EU renewed its asset-and-visa freeze on Belarusian officials in October, and worked to sever diplomatic ties between Brussels and Minsk.

Despite this and a lot of lip service to Belarusian independence, Belarus' rejection of Europe remains mostly nominal. The EU remains Belarus' second largest trading partner after Russia, and Belarusians have obtained the greatest number of Schengen visas per capita in the world in recent years.

While travelling through Belarus last week, I was shocked by its European feel. Belarus has none of the usual trademarks of a transitioning economy, and both Minsk and smaller cities are filled with modern cafés, Apple genius bars, and Adidas stores. French and English music are almost more prevalent than Russian music, and foreign T.V. stations are readily available in every apartment and bar. For a country that wants to distance itself from the West, the EU's influence is everywhere.

Regardless of Lukashenko or Yanukovych do or say, young Belarusians and Ukrainians want their countries to increase ties with the European Union. That is why so many young people are emigrating to the EU and why only 13.7% of Belarusian youth want to remain in their country to work or study. People, especially young people, love Europe despite the crisis of the Eurozone and frequent propaganda that favors increased integration with Russia. While the countries' politicians make policy decisions based on their economic dependence on their formidable neighbor, this generation has decided the side of the fence on which it wants to end up.

Policy makers will now be forced to either listen or to use repressive measures to crack down on opposition protesters.