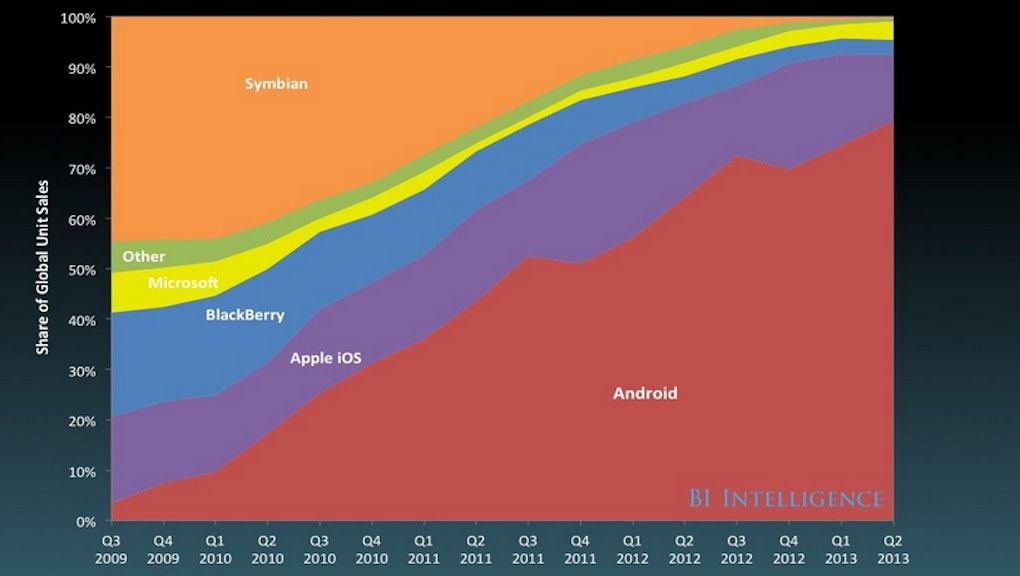 Apple Has Lost the Smartphone War. See Who the New King Of Mobile Is.

The smartphone wars are over. If these charts from Business Insider are any indication, Apple has lost — big time.

Google's Android operating system topped 81% of the smartphone market share in November, meaning that for every 10 new smartphones produced, Google's proprietary software is running on eight of them. Samsung was the big winner, comprising a full 39% of all Android phones. No other manufacturer came even close.

According to research firm Kantar, Apple's market share has been obliterated in Spain, and while its proprietary iOS has a healthy 15.8% market share in Europe, competitor Microsoft's Windows Phone is catching up quickly and has reached 10.2% of all European smartphone sales.

The smartphone market is exploding.

And it's sucking up all the time we used to spend on other devices.

We're watching videos on our phones instead of our computers.

And pretty much everything else we do online is now done on phones, too.

The majority of our social media use is on mobile.

And with that traffic comes all the ad revenue and rentier's benefits a company like Google or Apple gets from sitting on it:

And Apple is rapidly running out of time to reach new users in the U.S.

And so does iPad growth:

Why is Apple doing so poorly? Perhaps it's tied to Apple CEO Tim Cook's inability to provide (yet) the same kind of breakthrough devices that late CEO Steve Jobs continually brought to the market. But it's also because media companies grow in bursts and continually explode, then recede in a cyclic manner that should dissuade anyone from screaming that the sky is falling.

"There are three companies competing to be the internet platform of the future ... Google's approach is based on its near monopoly over advertising and its drive to feed this by a rapid expansion of its ability to acquire and control information; its image is that of the wacky, let's-give-it-a-whirl inventor. Facebook pursues a massive expansion of the idea of the social network; its image is that of a hip, genial, idealistic maker of friendships and connections. Apple aims for the tightest possible integration of hardware and software that ties users into its system; its image is that of the autocratic genius who knows better than you how to live your life and, soon, how to dress. Apple's image is at least the most honest."