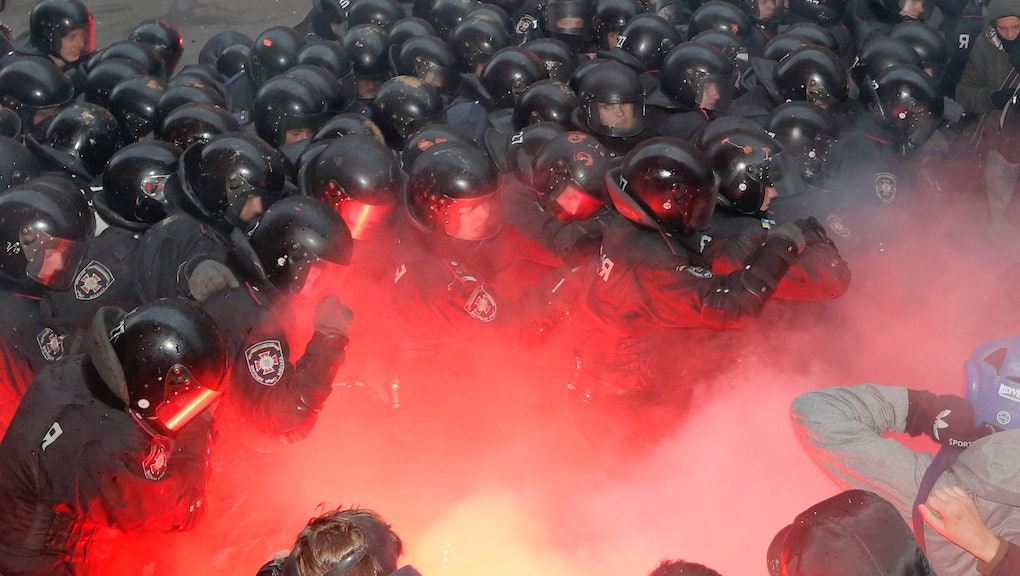 The past few days have seen protests around the world, from pro-EU demonstrations in Ukraine to lesser known protests in Sri Lanka and France.

Here are some powerful images from some of the demonstrations:

1. Ukraine's ongoing protests: "It's not a rally, it's a revolution."

On Sunday, Ukraine saw its biggest protest since the 2004 Orange Revolution. At least 300,000 people took to the streets of Kiev, the capital city, to call for the resignation of president Viktor Yanukovych.

Protests first began after Yanukovych's decision to back away from a landmark trade deal with the European Union on Nov. 21.

The protests have been ongoing, but things turned violent on Sunday when riot police fired flash grenades, tear gas, and truncheons on a crowd of demonstrators surrounding the president's office. The protesters were attempting to break through police lines by throwing rocks, as well as other objects. Dozens were injured in the clashes.

2. 'Day of Rage' over Israeli plan to destroy 35 Arab villages.

Back in June, Israel's Knesset, the legislative branch, approved the "Prawer-Begin Plan," which if implemented would mean the expulsion of 70,000 Bedouins, as well as destruction of 35 "unrecognized" villages in the Negev desert.

Activists called for protests on Nov. 30 to speak out against the plan, which Israeli authorities say is aimed at increasing "economic development" of the Negev desert.

Protests took place in both Israel and the occupied territories.

Anti-government protests erupted in Bangkok, Thailand last week, and this weekend things turned violent as three were killed during clashes.

Protesters have been calling for the resignation of Prime Minister Yingluck Shinawatra in order to end the influence of her billionaire family on the government. Her brother, billionaire Thaksin Shinawatra, was the country's Prime Minister from 2001-2006, when he was ousted by a military coup.

4. Stripping down for animal rights in Barcelona, Spain.

A group of 50 animal rights activists stripped down and covered themselves in fake blood to protest against the usage of animal fur on Sunday.

The activists are a part of Animanaturalis and aimed to raise awareness around animal cruelty.

5. A student shouts back at riot police sent to clear out protests in Alexandria, Egypt.

Students at universities across the country protested on Sunday for different reasons. In this particular photo, a protester in Alexandria shouted at riot police sent to disperse protests with tear gas. Students at University of Alexandria were protesting for the release of classmates held in detention.

Farmers in Colombo, Sri Lanka organized a rally to protest the country's 2014 budget. The government has failed to address their demands.

The country has 955,000 farmers, and their grievances range from issues around pensions, and putting up an electric fence to keep elephants from destroying crops.

Thousands of French truck drivers blocked a road on Saturday in order to protest a new environmental tax on heavy goods vehicles.

Even though implementation of the tax has been delayed, the truck drivers want it canceled altogether.

8. Not everyone was at Wal-Mart on Black Friday to take advantage of extra-low prices.

On Friday, 100 people protested outside of a Wal-Mart in Balch Springs, Colo.

They were calling for full-time work as well as higher wages. According to reports, 13 protesters were arrested.