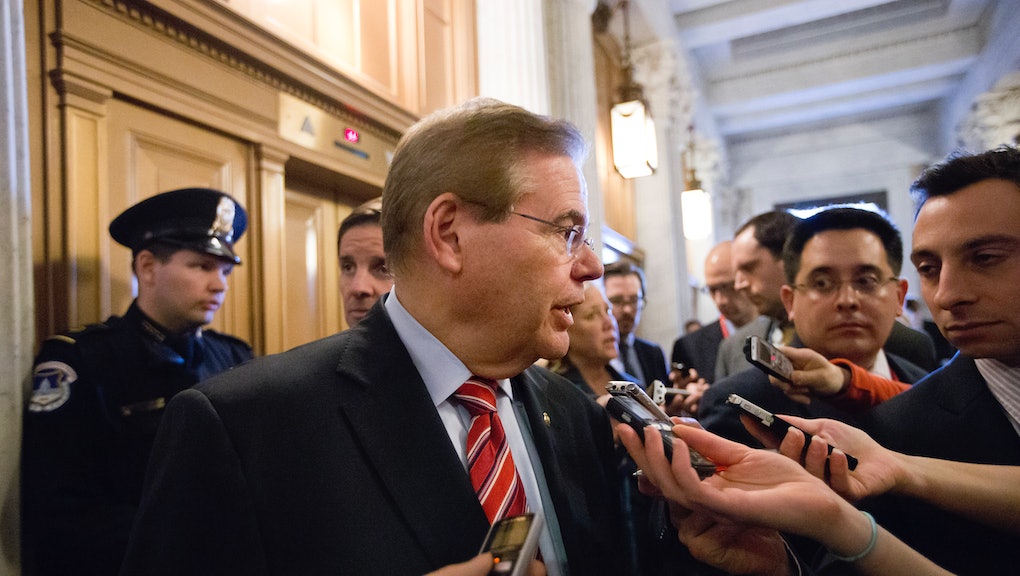 Iran Sanctions Bill Could Be An Ingenious Exercise in Diplomacy

Season's greetings from Congress! This time of year our nation's lawmakers engage in their typical smuggery, like taking what should be illegal recesses and kissing your own ass on national television. But amidst all of Congress' asinine distractions, they've still managed to find time to assail the makings of a peace accord with Iran by proposing a new sanctions bill against it.

While Sen. Robert Menendez (D-N.J.) has said that the reason for the the bill is as an "insurance policy" taken out against the nuclear deal with Iran should this interim agreement not lead to a long-term one, Menendez and Co. may not realize that their underwriting will do nothing but ensure that President Obama goes down as a hero. But what if that's the point? If so, we're witnessing the mastery of political power play using the age-old good cop/bad cop routine.

Although some believe that Congress putting pen to paper on further Iranian bludgeoning will do nothing but torpedo the trust that has been built thus far, it's conceivable that Senate Democrats are readying a checkmate by positioning the president to be the ultimate grand bargainer while war mongers warm the bench.

Tease this out: Senate members push for automatic sanction implementation should the deal fail at six months and President Obama gets to publicly and proudly rail against this measure as being counterproductive and obtuse, as he's currently doing. The Senate measure shows no good faith-based trust, which is exactly what is needed if we plan on righting this violently dysfunctional 34-year relationship.

Iran then sees a house divided: a Congress that they well know is castrated by special interest group money and influence, and a president that seems to want nothing more than peace. Iran is thus more likely to make haste to sign on to further agreement, given that only Allah knows who the hell will replace him in three years, and relatively speaking, Obama seems like a pretty nice guy.

Some of these senators may be jumping on the sword by selling themselves out in hopes of strengthening the narrative of peace down the road. It would be the ultimate finger to the Israel lobby, which generally gets queasy whenever they get their hands on a document that contains the words "Iran" and "deal" in the same sentence. Interestingly enough, Menendez enjoyed boatloads of money funneled to him from such special interests during his 2012 Senate reelection bid.

I'm more than happy to let the Israel lobby die a slow and painful death if it can't get its act together. The Obama administration is crafting the peace deals of the future while proving to American lawmakers that a couple of kidney shots to the long-time bully of Capitol Hill really can make a difference. Based on their current actions, it looks like many of these congressmen may be wrapping their hands in preparation.

Although it's tough to sort out any coherent strategy for drafting sanctions during a peace accord sans American Israel Public Affairs Committee (AIPAC) influence, enabling the president to play the long game just might be the least bizarre of the lot.