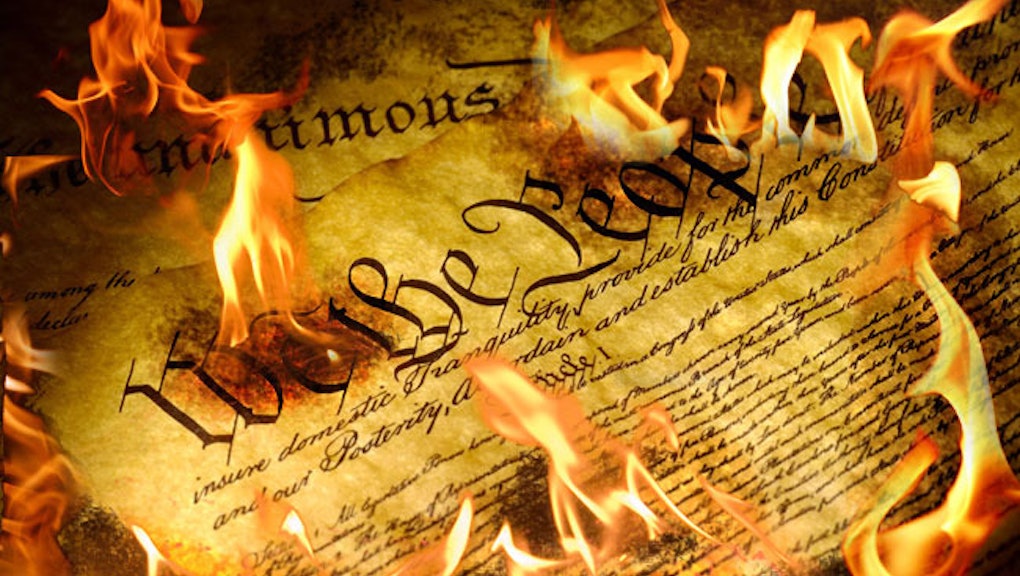 Supreme Court to Decide If UN Trumps the Constitution in Bond v. U.S.

Carol Bond is accused of attempting to poison her husband's mistress with toxic chemicals. The U.S. government took the case over from the Philadelphia Police Department, arguing that the use of chemicals with the intent to harm someone is a federal offense. The most interesting and relevant part is that the Chemical Weapons Convention, a United Nations treaty signed by the U.S., created the federal law in the first place.

Enter Bond v. United States, to be decided by the U.S. Supreme Court this term.

If Bond loses, Congress will be able to override any state or local law as long as it is part of an international treaty. There are many reasons to believe that such a precedent would have incredibly damaging consequences for constitutional liberties, law, and what's left of our theoretically decentralized republican government.

First of all, Congress has a long history of violating constitutional restraints without using international law or treaties as pretexts. One of the first acts ever implemented by Congress forbade any American from criticizing or speaking ill of President John Adams or the U.S. government; this, while the ink was still drying on the First Amendment. Since then, Congress has given us the income tax, the Federal Reserve, overseas wars of aggression, and a general expansion of government power at the expense of constitutional rights. With very few exceptions, whenever Congress convenes, our liberties tend to be in danger.

This is why it should be very troubling that this Supreme Court case could give Congress even more power to do so. Congress has been surprisingly unsuccessful lately at implementing many draconian (even by their standards) laws thanks to the uproar of common Americans.

For example, U.S. attempts to pass federal legislation like CISPA and SOPA which would virtually abolish the Fourth Amendment and further entrench the intellectual property racket were met with intense online and grassroots resistance. Thanks to Wikileaks, we know that Congress is trying to sneak in much of these same laws into a "free trade agreement" with Canada and Mexico.

Outside of those living in liberal bubbles, gun control is overwhelmingly unpopular. It is also largely impractical thanks to tens of millions of Americans who proudly and safely own a vast array of weapons. Because of this, many U.S. politicians have been advocating for a UN treaty requiring international gun controls.

Homeschooling is another quickly-growing right that while thankfully protected in most parts of the country is being threatened by the proposal of international treaties.

While the Constitution grants power to Congress to enter into any treaties as long as they don't violate the Bill of Rights, like many powers, these have been expanded upon already. In Missouri v. Holland, the Supreme Court ruled in 1920 that Congress' treaty power expands federal jurisdiction and power over any issue a treaty may regulate. More recently, the last four presidential administrations have all sighted international bodies like the U.N. and NATO, not the Constiution, to justify war.

It appears that the rights and liberties Congress has not yet legislated away would be even more seriously endangered by this Supreme Court case if Bond loses.

Regardless of the outcome of the case, a possible silver lining is that it will further ignite the calls for nullification, a Jeffersonian right and one of the best restraints on federal (and international) overreach. State and local governments have already taken steps in refusing to obey federal laws on an array of important issues like medical marijuana, gay marriage, gun control, the NSA, and the NDAA provisions authorizing indefinite military detention of U.S. citizens. Disunity and decentralization are our strengths!

While "states' rights" may conjure the bogeymen, it is important to recognize that only individuals have rights. State governments asserting their "rights" only means that political solutions are best handled at the most local levels possible. After all, what has historically been more prone to tyranny and abusive government power than large, centralized, national, state, and international bureaucracies or homeowner's associations and city councils?

The irony in Bond v. United States, of course, is that the same Congress that wants to enforce chemical weapons laws against private citizens is the same institution that has used them on Americans, in Korea, Vietnam and Iraq, and looks the other way when "allies" illegally use them.

Virtually every government law or restriction imposed on us is committed writ large by the state itself; this is one of the key libertarian arguments against the dangers of centralized power, a cure far worse than the disease.

While a case like Bond may well open a Pandora's box for further congressional circumvention of constitutional law, even without this precedent it is increasingly evident that pieces of paper do not restrict state abuse and overreach. The only thing that will is vigilance by an informed people concerned about their liberty, combined with loud opposition against any attempt to take it away.