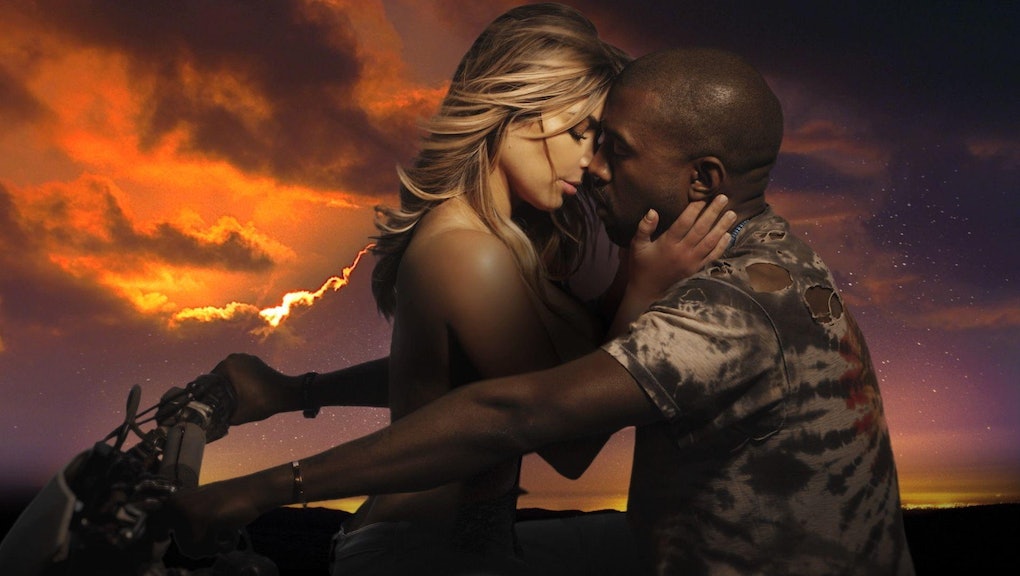 "Raunchy," "genius," "horrible,"  "provocative." These are just a few of the adjectives YouTube commentors have used to describe Kanye West's new video for his song "Bound 2," which features a nude Kim Kardashian.

Love her or hate her, Kardashian makes the video what it is. She is at once mesmerizing and polarizing. She's the reason the video has already amassed nearly 14 million views and a high-profile spoof. Those who criticize Kanye West's glorification of a woman whose chief claim to fame is a sex tape have overlooked the artist-muse dynamic of Kimye's relationship — a dynamic that gives West full creative license to praise and create art inspired by, for, and with whichever muse he chooses.

This type of relationship is nothing new. In Greek mythology, muses, or the Mousai, were the goddesses of music, song, and were worshipped for inspiration. For centuries, artists have courted women and men they've loved, admired, or been awestruck by for the purposes of driving the creative process. By its very definition, a muse is a "source of inspiration."

West and Kardashian are no different than Andy Warhol and Edie Sedgwick, a duo whose relationship has received far more respect in popular culture than Kimye's, despite Sedgwick and Kardashian both being socialites best known for their engagements with famous men. What makes West's admiration for Kardashian any less profound than Warhol's for Sedgwick?

Pablo Picasso was also notorious for using his lovers and wives as the muses for his paintings. In fact, one of his most famous pieces, "The Reve," was born out of his affair with a teenage Marie Therese Walter, who later bore the couple a son.

The history of the muse in pop culture has changed our understanding of the word considerably. We've exalted such legendary icons as Smith to the point of redefining what a muse is: Not only should a muse be beautiful, but she also must be talented, well-respected, charming, and high-brow.

While most can agree that Kim Kardashian is beautiful, West has been on a campaign to convince us that she's also talented enough to be worthy of a star on the Hollywood Walk of Fame, and high-fashion enough to merit a Vogue cover. In this way, West's borderline-obsessive captivation with Kardashian echoes one of the most controversial artist-muse relationships of all time: that of John Lennon and Yoko Ono. Anyone who has heard Ono sing can attest to her lack of mainstream "talent," yet Lennon made music with Yoko Ono, made music inspired by Ono (see: "Woman"), and was generally enraptured by her. The two made history together with their political demonstrations and prolific expressions of love (love that was rumored, perhaps by a bitter bunch, to have broken up the Beatles). And while West wouldn't compare himself to anyone less than Jesus (or Steve Jobs), Lennon-Ono is an artist-muse relationship he probably wouldn't mind emulating.

Both Ono and Kardashian are captivating and controversial in their own right. And controversial muses have inspired some of the most celebrated works of art throughout history. Look at painter Francis Bacon, who made a muse of George Dyer, the alcoholic man who at one point broke into his house. Or Balthus, whose Polaroids of his final (sometimes nude) muse, a pre-teen girl, are currently on exhibit in New York's Gagosian Gallery.

Controversy aside, the dynamic between an artist and muse often leads to the creation of more captivating work. The most common characteristic of the artist-muse relationship is love, and Kanye West seems to truly love, respect, and be in awe of Kim Kardashian. He admitted to admiring her from afar well before they began dating, and now, having had a baby with her and proposed to her, West has taken to professing his love for her through his work. He raps in "Cold," "And I'll admit, I fell in love with Kim / Around the same time she had fell in love with him." His feelings have resulted in countless shout-outs and interludes dedicated to Kardashian at concerts, music videos featuring the reality star, and even input on the creative direction of Kardashian's wardrobe.

We should give more credit to West and Kardashian's artist-muse relationship. He may be crazy, but he's a real artist (just look at My Beautiful Dark Twisted Fantasy — the album is a masterpiece). Who are we to judge his sources of inspiration? "Bound 2" bashers can say what they want, but the video is still a creative expression of West and Kardashian's art-infused relationship. It deserves more respect.