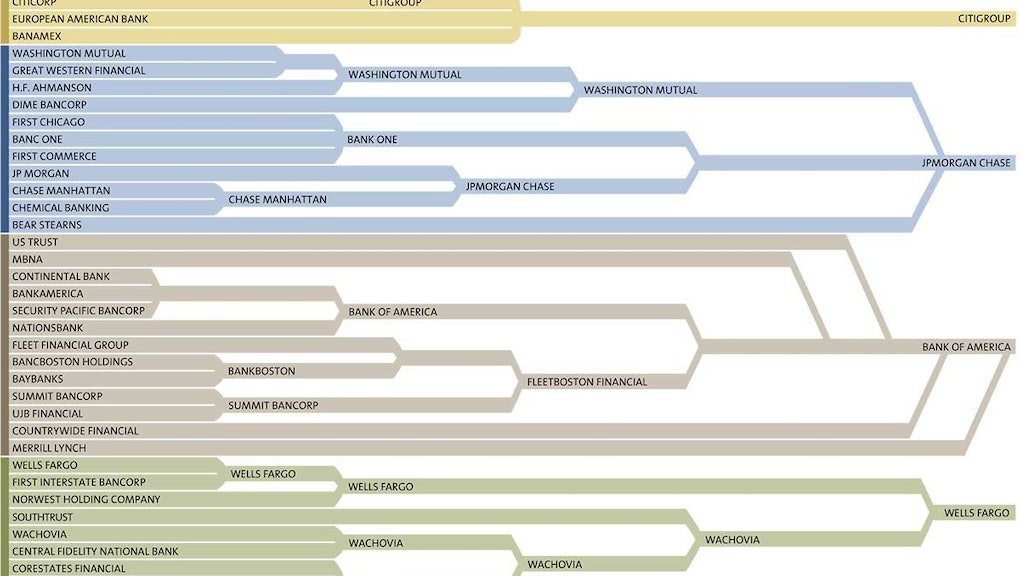 4 Companies Control the U.S. Banking Sector — This Chart Shows How

As of September 30, there are 6,891 federally-insured banks in the United States. While that may seem like a lot, that number is actually down considerably in recent years from a peak of 18,000. And it's trending downward. This summer, the number of U.S. banks dropped below 7,000 for the first time since 1934.

Much of the decline stems from the closure of small banks (less than $100 million in assets), a lot of that coming in the form of bank mergers. Which leaves a very small number of banks controlling a very large share of financial assets in the U.S. In 2010, just 10 financial institutions controlled 54% of financial assets, more than double what they held in 1990.

Taking it one step further, what were 37 banks in 1990 have merged into just four financial behemoths. Check it out:

Citigroup, JPMorgan Chase, Bank of America, and Wells Fargo now dominate the U.S. financial sector. So much so that startup banks have stopped popping up. The Bank of Bird-in-Hand in Pennsylvania is the first federally approved startup in almost three years.

But maybe the decline of small banks isn’t such a bad thing. Matt Yglesias of Slate argues that, if anything, the U.S. needs even fewer banks. Small banks are poorly managed, harder to regulate, and fail to compete with the financial giants. Competition holds banks accountable, but a local startup bank vs. Chase isn’t much of a competition at all.

Regardless, it’s a stark picture to see just four companies control U.S. banking. These four have become the definition – and poster children – for "too big to fail." And if trends are any indication, it’s only going to get worse.