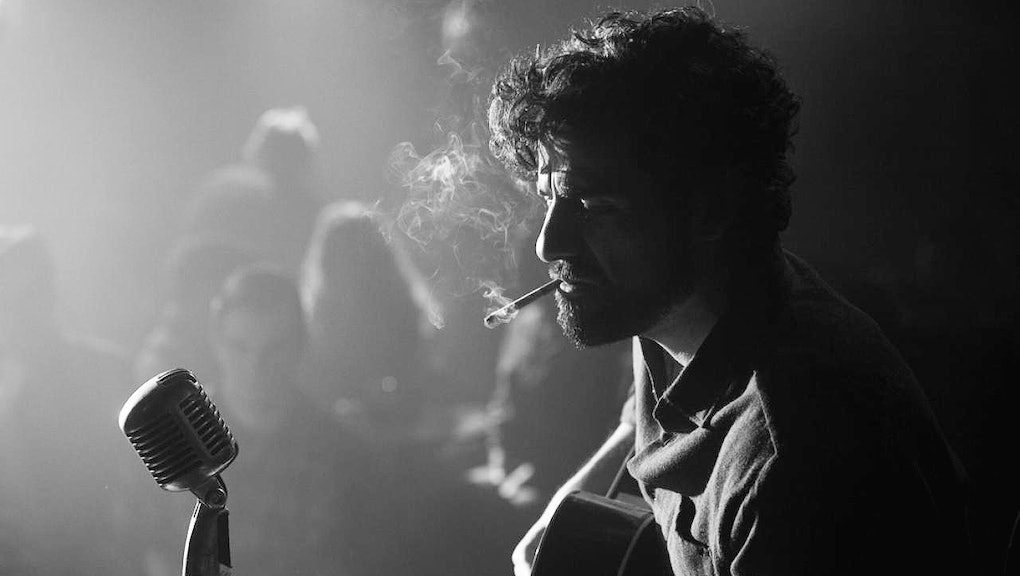 What We Hear When We Listen to Folk Music

John Lomax was a 55-year-old banker in Texas when he crossed the country chasing cowboy songs. That was in 1932. As a younger man, he'd written a book on those songs, but he'd gotten married and left his research behind in pursuit of a more stable career than song collecting.

When his wife died in 1931, Lomax was too sad to work at banking any longer. Instead, he gathered his 24- and 17-year-old sons into the family Ford and drove. A year later, they secured a 350-pound Dictaphone to the trunk of the same car and set off to record the most authentic American folk songs they could find. Those are the songs in the Archive of American Folk Songs at the Library of Congress. On their first trip, they kept a journal. They titled it "30,000 miles by Cowboy song," and wrote on the front-page "Herein are set down the experiences of the Lomaxes who peregrinated in 1932."

American roots music is all about peregrinations — journeys and arrivals. In 'roots' songs, there are thin righteous paths, and then there are the endless multi-lane highways that fork off from them. Lomax's journey to his famous 1932 trip was long, but his songs' have lived far longer. He gave America its ever present taste for authentic folk — its obsession with truth in music — and he uncovered for its musicians a set of mystical songs and an elusive sound that they've been seeking since.

Recently, it seems the roads of American music make a circle. On Friday, the Coen Brothers will release their newest film Inside Llewyn Davis. The movie is set in the New York folk revival scene of the early 1960s — the period right before Dylan came to New York to visit a sickly Woody Guthrie and stayed to reinvent himself as a folk hero. At that time, folk singers like the film's title character were constantly preoccupied with authenticity, thanks in part to the broad public knowledge of Lomax's songs. As a result, the smoky cafes and bars of New York were filled by the smokier sounds of the American roots music as sung by singers who lived in 20th-century Manhattan and were eager to pretend they didn't. Like Lomax, most folk singers were unemployed preservationists. And they sang his songs.

If that sounds like a fair description of Williamsburg today, that's because it is. American roots music is experiencing such a resurgence that the biggest band in the world travels by train and dresses as if their merch table were actually a wagon selling Marcus Mumford's Miraculous Male Enhancement Elixir (among other homebrew cures, like vinyl records). Our collective fascination with yesterday's authentic folk, though, seems to suggest some general feeling that the life we've been given today is inauthentic — that real life was an era lived by people with deeper voices, dustier guitars, and fewer faithful women.

The soundtrack to Inside Llewyn Davis is a product of that revival. It's produced by Marcus Mumford, T Bone Burnett, and the Coen brothers. Burnett, who caught his first big break as the back-up guitarist in Dylan's Rolling Thunder Revue, has been behind nearly every successful Americana film soundtrack (Crazy Heart, O Brother, Where Art Thou?, Cold Mountain) of the last 10 years. All this because, after seeing Raising Arizona, he cold-called the Coen brothers and told them to keep him in mind. Like any folk hero, he's reliably off-beat — brilliant, acerbic, and constantly willing to decry anything digital as "dehumanizing." He, too, is ever trying to preserve the sounds of an older, truer America.

So it's natural that the Inside Llewyn Davis soundtrack, even though it's an album of stripped-back traditional folk songs, is exactly the kind of music people today want. Between Oscar Isaac's sleepy tenor, Mumford's patented roar, and Justin Timberlake's unexpectedly goofy, period delivery, the Coen brothers have produced an album of traditional American roots tunes that will probably hit the top 100. For the most part, the songs are beautiful, spare affairs.

Yet the most telling entry on an album of old, weird folk could pass completely unnoticed as a strange historical fact. "Fare Thee Well (Dink's Song)" sounds like a bonus track off Mumford's Babel. It's a heart-rending song about a lost lover. It has a catchy chorus, and a simple, lulling structure that revolves around a beautiful refrain: "Fare thee well, my honey." Though an old song, it isn't so far from the "Hopeless Wanderer" wheelhouse. Of all the songs, it has received the most attention from the press.

"Fare Thee Well" wasn't yet Top 40-ready when a 41-year-old Lomax discovered it while hunting for songs on the banks of the Brazos river in 1908. Lomax, then a researcher at Texas A&M College on a Shelden grant from Harvard for the "investigation of American ballads," must have looked out of place asking around for the best singer in the migratory worker's camp that had sprung up around a new levee the state was building. "I found Dink washing her man's clothes outside their tent on the bank of the Brazos River," he later wrote. After plying her with a whole bottle of gin, Dink sang "Fare You Well, Oh Honey," a song never before recorded. Even then, he thought it a "very old story." 105 years and two world wars later, the 26-year-old Marcus Mumford made Dink's song sound like a hit.

In 1985, Bono guessed at what music would sound like in the future: "The music that people would be playing in their cities … in an electronic age, won't be electronic music. It'll be totally naturalistic, probably acoustic — Irish music, Cajun music, black music, reggae music, blues. That'll be the music on the college campuses, because it'll remind us of something we've lost."

American roots music is all about peregrinations and the things that get lost and found along the way. The soundtrack to Inside Llewyn Davis is no exception. Each of these songs is about a journey. If the songs are about love, they're about a lover leaving. If they're about death, they're about the wandering life that came before. These songs have been travelling for a long while, too. They've been there at each of our folk revivals, always serving as some reminder of what 'real' America sounds like.

When John Lomax came back from his trip in 1932, he was still broke and still unemployed. His son, an unhelpfully dramatic writer, wrote about his family on the last page of their log, "They are homeless, jobless, and have no expectations. Let the curtain fall upon this woeful last scene. So ends this log."

As the country fell deeper into its depression, though, Lomax didn't follow. He gave himself entirely to song collection, and soon rose in the ranks at the Library of Congress. It's at just such moments of despair that people and societies start looking around for something to hold onto. For a boy raised on the Texas frontier, these songs likely felt like a homecoming. Lomax found truth in his music; first for himself, and then for disillusioned Americans and cold war folk-singers.

Now, in 2013, we're yearning for 'authentic' music again. There have been a handful of great American folk revivals since the early 20th century, and we, thumbs to tablet and farm to table, are living in one of the greatest.