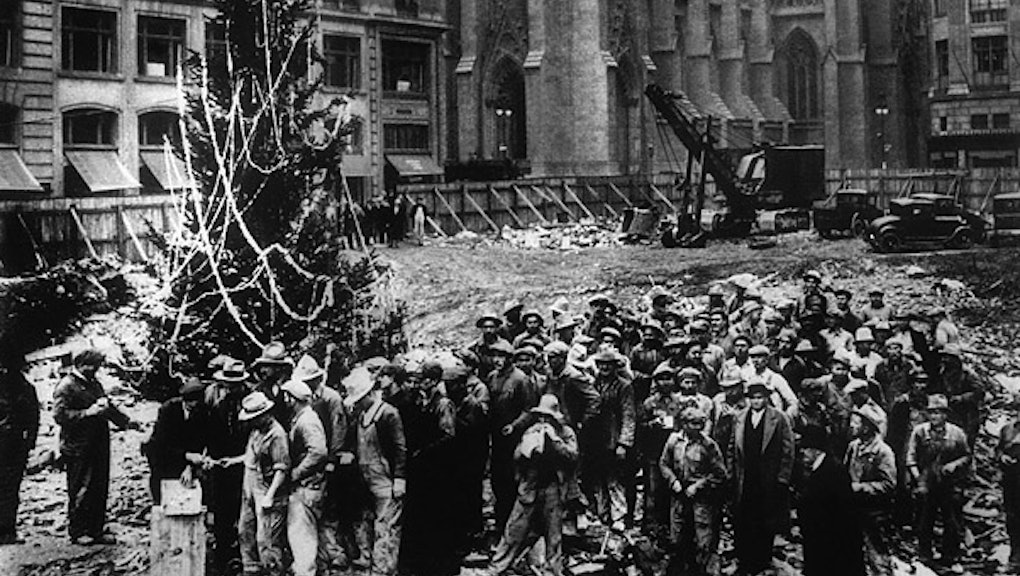 This year's Rockefeller Christmas tree lighting airs tonight on NBC with all the bells, whistles, and pop stars that come with the event — a two-hour broadcast (with a hour-long pre-broadcast) all organized around a flip of a switch. Granted, the event is free to the public, and if you can fight your way through the crowds of people, by all means enjoy. Otherwise, you'll watch it on your TV for about five minutes, channel surf away to something more interesting, then come back to NBC at 9 p.m. for the SNL Christmas special.

But comparing tonight's festivities with the very first Christmas tree lightning in Rockefeller Center doesn't exactly instill holiday feelings. In the middle of the Great Depression, a group of construction workers in the area erected a tree amidst work tools, construction materials, and mud.

The humble event in 1931 draws an obvious comparison to tonight's PR-fest extravaganza, especially when we, too, are in the middle of perilous economic times. It also brings up the greater issue of why, in our Great Recession, it seems we still continue to be a culture geared towards this sort of excess rather than the simple, meaningful gesture on which the tree lighting is based. Something, it seems, gets lost in this insistence on hype, especially during the holidays.

Just a brief look at the details of tonight's special makes your head spin. It's hosted by America's favorite weatherman:, Al Roker. It features performances by Mary J. Blige, Toni Braxton, Mariah Carey, Kelly Clarkson, Kenny "Babyface" Edmonds, the Goo Goo Dolls, Ariana Grande, and Jewel (most of whom have holiday albums dropping). The entire production has its own webpage full of shiny images, videos, and EverReady Batteryies ads. And I call it a production because it's officially produced by Brad Lachman Productions.

In the snapshot of the first tree lighting, the men are worn out and dirty. They are in their workclothes. In fact, most of them aren't even looking at the camera. But they still erected a symbol of hope and celebration despite the fact that much of the nation at the time was jobless, homeless, and struggling to survive.

It seems lucky that the moment was even photographed, since it clearly wasn't planned. These workers put up and decorated that tree spontaneously. It's an emotional act, not a deliberate presentation of glamor or commercialism.

Yet there is some hope here. Though the spectacle is overwhelming, I suspect that, if given a choice between the first tree lighting and tonight's, much of our generation would have the same preference — to watch a simple tree erected without much show by a group of people united by a common plight.