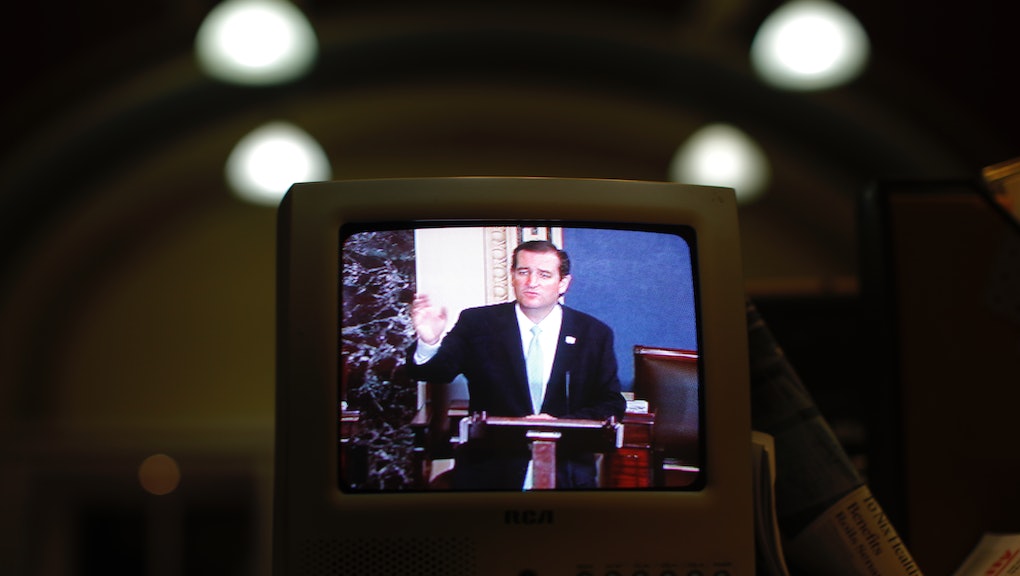 On Tuesday, President Barack Obama defended the Affordable Care Act (ACA) from its critics. He said, "Now, we may never satisfy the law's opponents. I think that's fair to say. Some of them are rooting for this law to fail — that's not my opinion, by the way. They say it pretty explicitly. Some have already convinced themselves that the law has failed, regardless of the evidence."

This accusation — that critics of Obama and the Democrats' signature health care reform are "rooting for failure" or are "invested in failure" — has popped up all over the place recently. Obama and other Democrats have voiced it repeatedly, both in recent months and back in 2009 when the law was in its formative stages. More broadly, Democrat pundits Donna Brazile and Anita Dunn have accused Republicans of wanting bad economic news. New York Times columnist Timothy Egan has gone so far as to say that Obama's opponents don't want people to have health insurance, and that, "It's hard to remember a time when a major political party and its media arm were so actively rooting for fellow Americans to lose."

I doubt Egan would agree with the claim, but it wasn't that long ago that Republicans were accusing Democrats of rooting for the failure of the surge in Iraq.

If you recall, Democrats actively opposed President George W. Bush's January 2007 announcement to redeploy U.S. troops in Iraq, put more boots on the ground, and directly engage Iraqi militants. Even before the redeployment was complete, then-Senate Majority Leader Harry Reid (D-Nev.) predicted that the Iraq War would help Democrats "pick up Senate seats." In August 2007, Obama (then a senator) called the surge a "complete failure." About a week later, the Shiite militia leader Muqtada al-Sadr ordered the Mahdi Army to stand down, and violence dropped drastically.

In response, Republicans and conservatives hurled the "rooting for failure" accusation at Obama and other Democrats. Over and over and over again.

Just like "extremism" and "hostage-taking" rhetoric, "rooting for failure" is another example of the thoughtless, destructive invective that politicians and pundits throw at one another. They make little effort to justify what they're saying, and are oblivious to the fact that they are engaging in — verbatim — the same demonization that their opponents use against them. And then, without irony, they assure us that it's really the other side that's mostly responsible for incivility and the failure to have a proper debate.

Democrats had legitimate criticisms to offer about the Iraq surge: More U.S. soldiers would die, it might breed still more violence in Iraq, and it would keep Iraq's own political process from stepping up to address its own sectarian issues. Likewise, Republicans have legitimate criticisms about the ACA: It may be too disruptive of existing health insurance plans, it may go over the budget, and its roll out has been marred by incompetence or even dishonesty.

Unfortunately, as is typical in American politics, the response to these legitimate concerns has been to say, essentially, that the critics are evil, and that they want what's bad for the country. Democrats wanted the U.S. to fail in Iraq, wanted American soldiers to die, and wanted the violence in Iraq to get even worse. Republicans want people to go without health insurance and to suffer without adequate health care. What other explanation could there possibly be if someone opposes your ideas?

It's become a silly, vindictive cycle: When you're out of power, be quick to point out any problem and pronounce the failure of your opponent's programs and policies. Then, when you're in power, criticize your opponent for being quick to pronounce the failure of your programs and policies, and then deride them for "rooting for failure."

The debate over Obamacare is more evidence of how unproductive and malicious our political debate has become. Our leaders recite, recycle, and regurgitate the exact same name-calling ad nauseum. None of them counter the negative feedback loop by holding their tongue, counting to 10, and then denouncing the invective evenhandedly, even if it means criticizing members of their own party.

Maybe Obamacare is good for the country, maybe it's not. But the debate over it — riddled with "rooting for failure" and other name-calling — has no doubt been bad for America.