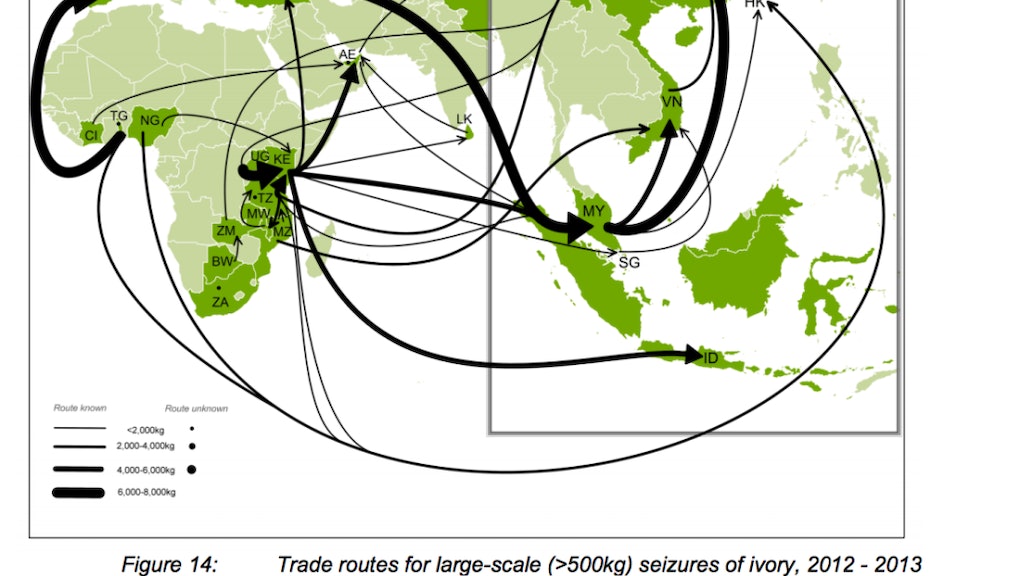 The news: After years of stonewalling, China, the world's largest market for illegal ivory, and 30 other countries have agreed to treat the ivory trade as a serious criminal offense after a Botswana summit.

The agreement seeks to eliminate the ivory trade, imposing stricter penalties for smugglers and poachers, including harsher prison sentences and declaring engagement in the trade an offense enforceable under international law. Nations involved in the ivory trade which attended the summit will intensify efforts to coordinate intelligence-sharing.

"With an estimated 22,000 African Elephants illegally killed in 2012, we continue to face a critical situation," said John E. Scanlon, CITES (the Convention on International Trade in Endangered Species of Wild Fauna and Flora) secretary-general.

China is responsible for purchasing roughly 70% of the world's ivory, which is used in expensive luxury goods such as carvings, and is ground into powder for use in traditional Chinese medicine. Meng Xianlin, a Chinese wildlife official, says that Asian demand requires up to 220 lbs. of ivory every year — or the lives of 20,000 elephants. Chinese investors call ivory "white gold," while carvers and enthusiasts call it "organic gemstone." The smugglers themselves are more honest: They refer to ivory as "bloody teeth."

How bad is this underground economy? Quartz pulled these charts from a CITES report, demonstrating how Chinese demand for ivory has increased dramatically over the past decade:

Those 22,000 elephants killed in 2012 are approximately 7.4% of the African elephant population, a number far exceeding their natural replenishment rate of 5% a year.

While poaching was down approximately 3,000 elephants from a harvesting peak in 2011, 2013 could be 20% higher than it was during the height of poaching that year. Or, more bluntly, one of the worst years on record. If the trend isn't reversed, poaching could wipe out one-fifth of Africa's elephants over the next decade.

That same CITES report says that "ETIS analyses indicate that, in recent years, China has become the world's largest consumer of illegal ivory" and that poaching is highly correlated with poverty and weak governance in the countries where it occurs.

Will the new agreement do much? While it's a step in the right direction, don't expect an immediate sea change in the illegal ivory trade — even though the organizations involved were pleased with measures to take "immediate action." The Chinese government is adamant on running a large-scale legal ivory trade, which is known to work with the black market. Until demand fades away, there will always be a market for ivory.