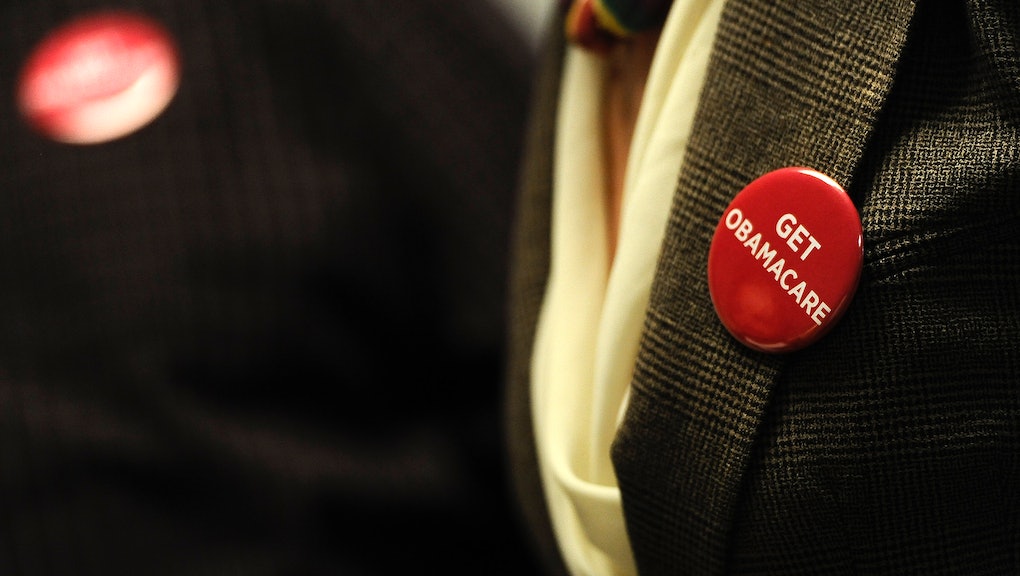 What Your Stance on Obamacare Says About You

Over Thanksgiving, I was at the dinner table with my sister, my father, and my father's partner. Put another way, a fourth-year medical student, psychologist at the VA, and neuropharmacologist. They were talking about Obamacare (a.k.a. the Affordable Care Act, or ACA) over drinks, while I was mostly just drinking.

The health care industry is so dense that it doesn't really make sense to me. As I drifted into a mild buzz, something someone said woke me up. After all, I was the only one at the table who had actually signed up.

"I'm paying 100% more every month under Obamacare than I used to," I said with frustration. It got their attention (read: I'm the youngest child). I explained that I used to pay about $170 a month for a plan with a $10,000 deductible and no annual check-up and had just signed up for a plan under the ACA for around $300 a month (including a slight subsidy), which was one of the cheapest available. Under this new plan (starting next year), the deductible would be $3,000 and an annual check would come at no cost to me.

"Welcome to society," one of them joked. And of course, like many offhand comments said only in jest, it sat with me. It was true.

The debate over Obamacare is a much more fundamental question about America than just how we deliver health care. It's time we openly recognize that it has everything to do with the future of America itself.

There continue to be two different visions for what this country is and this is one of those moments where we choose which side we're on. We can either choose a path that leads to an America of just a bunch of individuals who happen to live on the same continent, where buzzwords like "free market" and "rugged individualism" reign (a "cat society"), or we can choose a different path, where America is actually one coherent place — one community, protecting and helping each other the best we can (a "dog society").

I'm a dog person myself and I hope you are too.

The America I want to live in, and the one I believe is worth building and protecting, is one in which we support each other and admit that government (while it fails sometimes just like we do), is the best avenue we have for group decisions and action.

And the America that sucks is this lame place where the "free market" decides too many things and we're left competing with each other for every scrap of kibble, as if we're feral felines in a zero-sum game.

I know which path I want to walk on with you and it's not that latter one.

For now, let's leave aside the fact that my free individual health check-up, and preventative care like this generally, tends to save money (and the effects that will have on the system over time), because that'll get into a larger conversation about individual policies that make up the larger law that you'd be better off discussing with a legislative aide or someone with an MPA. Let's also ditch a discussion of the subsidy component of the law (about 8% of my annual cost) for now, for the same reason as above.

And finally, let's also table the things that will need to be reformed about the law. There are many. Something will need to be done about the perverse pay for service system; we'll need more primary care practitioners; government will probably have to pay more for medicaid, etc. (If you have questions about those, you're welcome to come with me to my next family dinner.)

But that's not what I'm here today to share with you.

Instead, let's get back to what's at the heart of this contract. My paying more for Obamacare will mean that the mother who gets fired from her job and gets diagnosed with pulmonary heart disorder and dies because she can't get consistent treatments, will instead live. It will likely mean that tens of thousands of Americans won't lose their lives every year because they can't afford or don't have health insurance. These aren't far away people mooching off me. This is our familia. These are are our fellow Americans.

And so, yes, I don't want to pay more, but I will. And I will gladly. Because it buys into the kind of America I want to be a part of. It buys into an America where people don't die from a treatable condition because they don't have health insurance and can't afford an annual fucking checkup in the greatest, richest country on motherfucking Earth.

I want no part in that kind of system and paying into Obamacare is my chance to take a stand.

There are things that need to be changed about the law. But it still represents the America that I want. A badass nation full of dog lovers.

And I hope you feel the same way too.