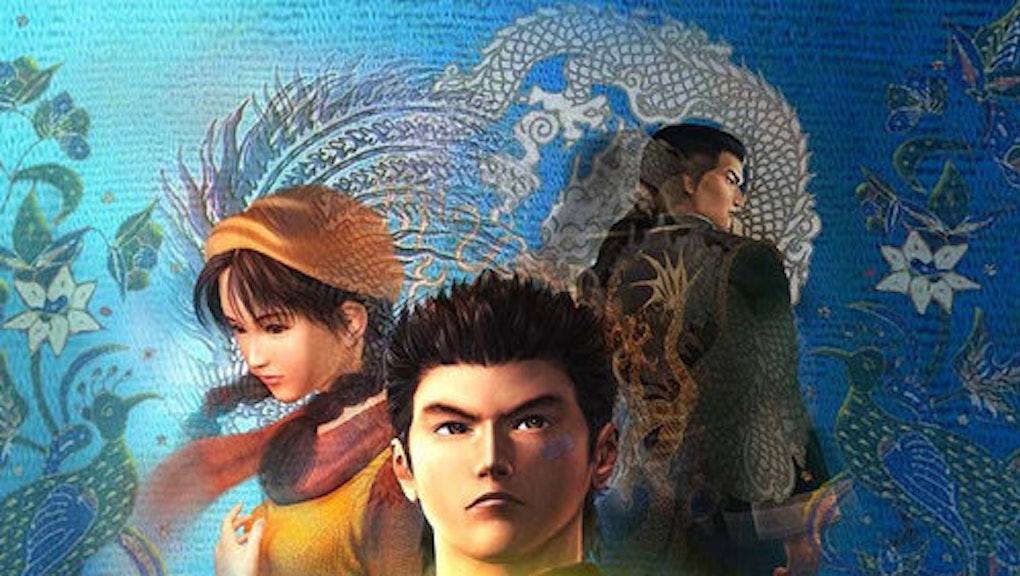 #ShenmueIII Brings 90s Sega Glory Back to the Limelight

Last week, some malicious brigand applied for a fake trademark in the name of fallen gaming giant Sega's rumored, but never confirmed, Shenmue III. Fans of the classic video game franchise quickly took to Twitter to show their love, and before Sega could scream "Holy Golden Rings, Sonic!," #ShenmueIII was trending. This meant two very important things: Fans like yours truly got a chance once again to rant about how awesome Shenmue was, and Sega got a reminder that its current mantra of mediocrity is not okay.

If you don't know what Shenmue (I or II) is, you should. The game serves as a reminder of Sega in its glory days, a time before it was crushed by Nintendo and when it made art instead of Ghost Squad and Super Monkey Ball.

In the early '90s, there was serious beef between Sega and Nintendo. It was so bad that they even punked each other on TV.

Nintendo was home to genius director Shigeru Miyamoto, who brought with him franchises like Mario, Legend of Zelda, Kirby, Donkey Kong, Metroid, and Pokemon. In Sega's corner was another genius, Yu Suzuki, who along with his development team AM2 (basically Sega's Pixar) churned out classics like Virtua Fighter, Hang-On, After Burner, and Space Harrier. Gamers can quickly see the difference between Nintendo and Sega's offerings.

In a desperate attempt to stay relevant, Sega called in Suzuki, who had mostly done work for their arcade market at that point. He was essentially told, "Just give us a masterpiece." About $47 million later, he gave them Shenmue.

In many ways, Suzuki's ambitious project represented a growth of the gaming medium. Long before Grand Theft Auto and Elder Scrolls, Shenmue had an open-world environment, wherein peripheral characters went about their daily lives, and environments were interactive in an unprecedented way. More than just displaying technical advancement (which is what games today think qualifies as innovation), Shenmue had some moments of artistic mastery. When a game is willing to sit by and let the player drive across town with the girl he loves — both knowing that life will never be the same — you know you've come across something far more special than the rain of bullets and fists typically found in gaming.

Add that to a fantastic musical score, some of the company's signature terrible voice acting, and more references to classic games than you can count, and it was enough to leave any fan of Sega's glory days teary-eyed.

Unfortunately, Shenmue didn't sell. Even its critical response was wildly varied. Sega, now realizing the Dreamcast was done, partnered with Microsoft to bring Shenmue II to America on the Xbox. It still didn't sell (but what did Sega expect when it only gave American Xbox owners the second half of the story, anyway?).

Suzuki was never quite forgiven by Sega after this loss, and slowly drifted away from mainstream gaming. Shenmue II was the final installment we got of the series, and Shenmue's protagonist Ryo Hazuki never got his revenge.

Shenmue's story should reminde Sega that fans still remember the days when the company had real ambition, was willing to take risks, and wasn't content with mediocrity. Shenmue II was among the last games in which the company actually pushed the envelope. Now, Sonic is simply passable, those terrible Mario/Sonic crossovers are an insult to what used to be a 90s dream fight, Virtua Fighter keeps piling unnecessary new costumes and moves onto an old game, and we still don't have a Jet Set Radio (remember, Sega, this game spear-headed the cel-shaded graphics revolution!). Hell, Nintendo even made a better Sonic game than Sega ever did.

In many ways, Sega is a lot like Pixar. Both companies somehow lost their genius touch along the way. But Sega no longer being a console maker doesn't mean that it should be thought of as just another company. Bioware, Crytek, and Bethesda don't own consoles, but no one can deny that they're a force to be reckoned with.

The fact that Shenmue III can trend on Twitter after all these years is proof there are still fans who remember that Sega does what Sony, Microsoft, and Nintendo can't. So, Sega, please remember your roots, and start being awesome again. Getting Suzuki back and letting him make Shenmue III would be a good place to start.