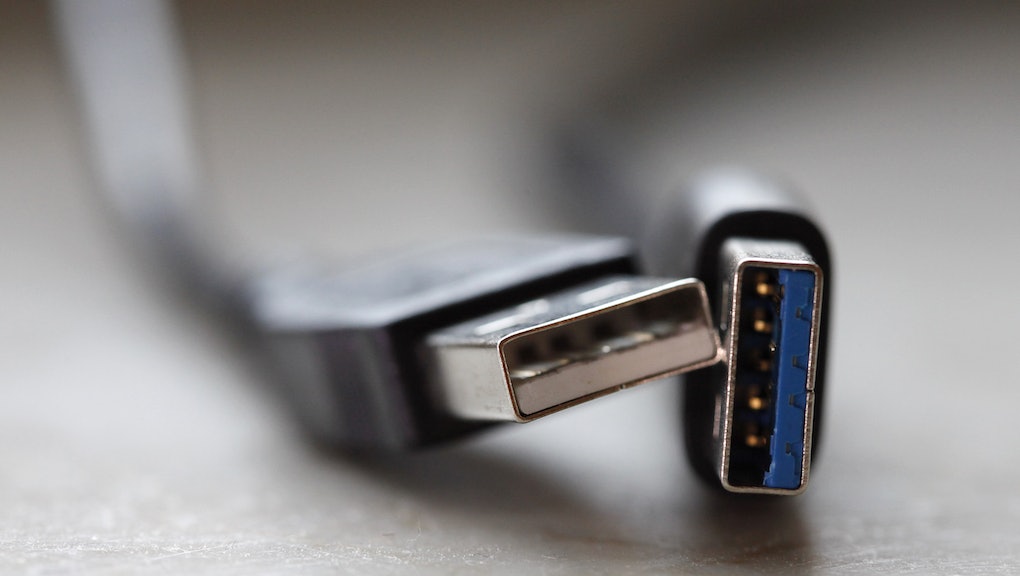 One Of the Weirdest Problems in Technology Has Been Solved

The news: Tired of fumbling around with your USB cords in the dark, trying to figure out which way the plug needs to be oriented to snap in without breaking your laptop?

FINALLY, a design flaw which has been around for NEARLY 20 YEARS is being fixed with a new Type-C USB 3.1 connector under development for mid-2014 that's reversible, meaning you can plug it in any way you god dang like, making this a problem of the past:

The background: USB, or Universal Serial Bus, is a series of standards developed in the mid-1990s and released in 1996 that specifies industry practices for connections, communications, and power supply between computers and other electronic devices. It's best known for the its widespread (and nearly universal) implementation in the standard USB cord, which connects your computer to your peripherals — everything from your trusty cell phone to this nifty USB vacuum.

But USB connectors have long had an irritating problem — namely, the fact that they look like this on the inside:

Try to plug it in the wrong way, and it won't work. And because standard USB port design is interlocking rather than a simple plug, hitting a plugged-in cord can damage the computer's USB ports:

The new Type-C connector will be the size of a micro-USB port, and be truly reversible, much like Apple's proprietary Lightning connector. It's designed to be compatible with future improvements to the standard, and will likely be faster and carry a stronger current than existing USB cords — meaning it won't take three hours to charge your phone from your laptop.

Intel's Alex Peleg says the new standard "... will enable an entirely new super-thin class of devices from phones to tablets, to 2-in-1s, to laptops to desktops ... This new industry standards-based thin connector delivering data, power, and video is the only connector one will need across all devices."

The drawback: It won't work with existing USB ports, meaning that you'll either need to use an adapter to connect devices that need USB to function (negating the benefits of the new cables) or upgrade your hardware to run entirely on Type-C, which isn't feasible for the vast majority of users. More likely, it'll be an incremental upgrade where you'll see the new ports appearing alongside older USB connectors in the next generation of PCs and mobile devices.

But eventually, cables might become entirely obsolete. Apple is moving in on wireless charging technology, meaning that future generations of devices are increasingly likely to communicate and power each other across nothing but thin air.