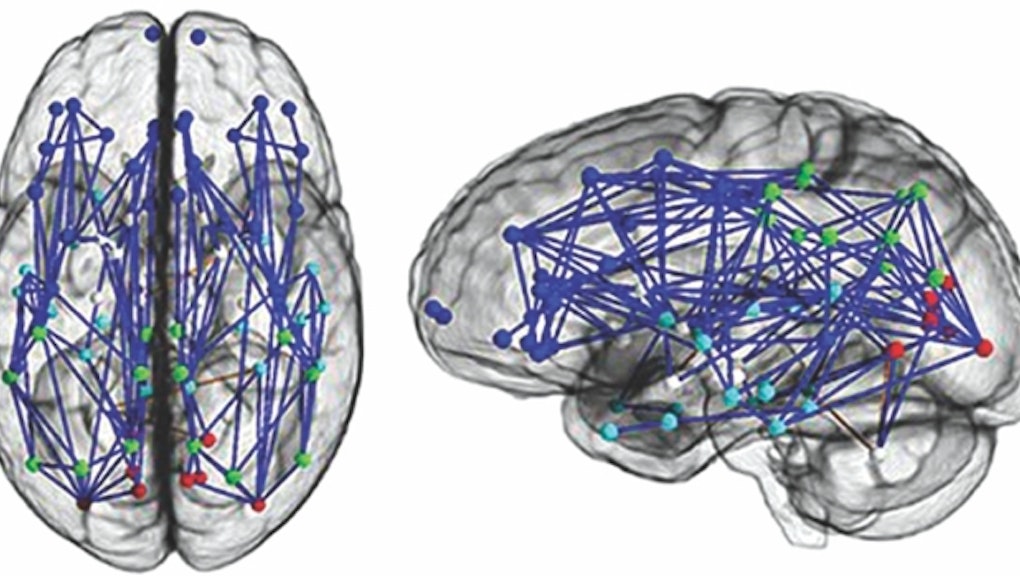 The news: A new study published in the Proceedings of the National Academy of Sciences claims to have the first definitive evidence that the brains of men and women are hardwired differently, providing a scientific backing for gender-based behavioral stereotypes.

The researchers used a technology called diffusion tensor imaging to chart the structural connectivity of the brains of 949 people aged 8 to 22. They found that female brains tend to have connections which run between the left and right hemispheres of the brain, while male brains run connections between the front and rear of the same sides of the brain. According to the study, these differences actually develop during the same period of time as many secondary sex characteristics emerge during adolescence.

According to study author and University of Pennsylvania in Philadelphia radiology professor Ragini Verma, "These maps show us a stark difference — and complementarity — in the architecture of the human brain that helps to provide a potential neural basis as to why men excel at certain tasks, and women at others."

"What we've identified is that, when looked at in groups, there are connections in the brain that are hardwired differently in men and women. Functional tests have already shown than when they carry out certain tasks, men and women engage different parts of the brain," Verma continued.

According to Verma, because the female brain has more connections between the logical thinking-associated left hemisphere and the intuition-linked right hemisphere, the research could explain why females do better than men at intuitive tasks.

She went on to explain that "Intuition is thinking without thinking. It's what people call gut feelings. Women tend to be better than men at these kinds of skill which are linked with being good mothers."

But ... Don't go running to this study as proof that men are from Mars and women are from Venus. Critics are already lining up to point out that the findings in the study aren't what they seem and are subtly reinforcing sexist attitudes.

An article in The Independent, for example, ran with the headline "The hardwired difference between male and female brains could explain why men are 'better at map reading'" (a specific task not actually measured by the study but which nonetheless reinforces a popular stereotype).

According to Melbourne School of Psychological Sciences ARC Future Fellow Cordelia Fine, the study is an important indicator of "neurosexism," where scientific research can be used to justify sexist attitudes that aren't actually scientifically justifiable.

For example, Fine points to other explanations than gender for the differences in measured behavior — including the fact that the measurements may have more to do with brain size than brain sex per se. Men tend to have larger brains than women and a large brain is not just a tinier brain increased in size; they're wired very differently to solve different engineering problems that occur when neurological systems are scaled upwards in size.

And the original study from which Verma's team derived their research measured 26 possible combinations, finding that 11 of the differences were either virtually nonexistent or so small that "the 'right' sex would be superior less than 53%' of the time," and "the much-vaunted female advantage in social cognition, and male advantage in spatial processing," still let the so-called inferior gender beat the other over 40% of the time.

The study assumes that the differences in brian structure are purely biological, negating the possibility that male and female brains formed differently according to their social experiences — a scientifically demonstrated process known as brain plasticity.

So what does the study really tell us? That the neurological differences between the sexes is still very poorly understood, and that science can easily be interpreted to fit preconceived notions of gender roles and behavior.

For example, Fine says that it's "surprising" that study author Verma would let herself be quoted in the popular press that this was proof of "hardwired" sex differences, and especially that she would then say the study was evidence for things that weren't even measured in the study, "such as in 'intuition' skills 'linked with being good mothers.'"

More problematic is when poorly-understood gender science enters the popular media, generating both sensationalist claims and what More Than Men and the internet calls "biotruth," or the argument that "Men are x, women are y. That's just how humans are; it's biology. [And therefore the behavior you're complaining about is acceptable.]"

While the way people act is a function of hardwired parts of the human brain, the plain truth is that science is still in the initial stages of explaining those mechanisms in great detail. And as More Than Men notes, "Even if we could ascertain what the natural tendencies of men and women are, that would tell us nothing about how men and women should behave."