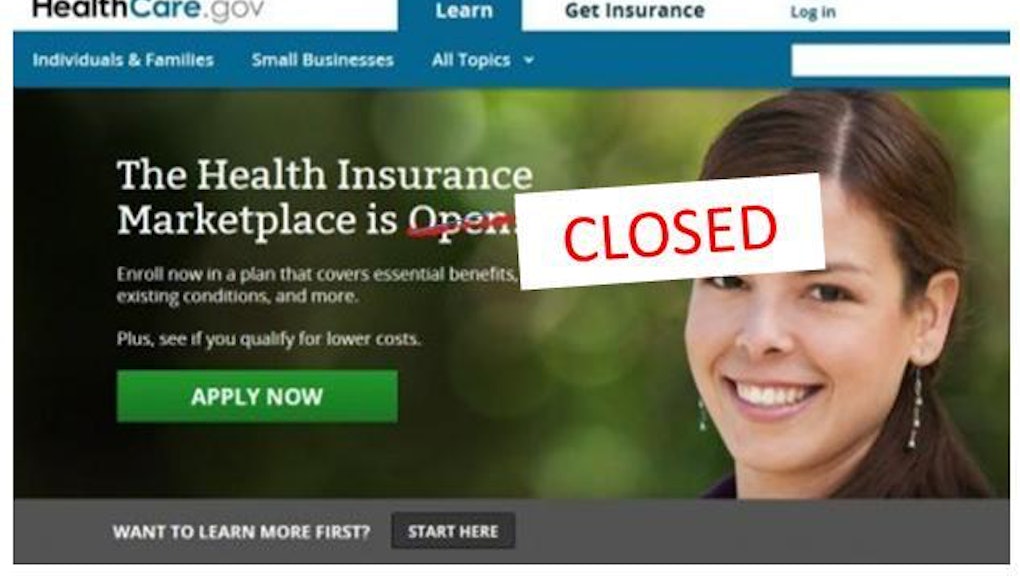 Why Healthcare.gov Failed in One Flow Chart

The Obamacare website glitches can hardly be a surprise. While appalling and inexcusable, healthcare.gov's failures are part of the larger norm of failing governmental technology initiatives. This is a widely-known problem spanning across government, and its root is an even bigger problem.

Just look at this flowchart from the Washington Post:

President Obama himself admits that the site failed because government is less effective and innovative than private businesses, the gap being particularly pronounced in the realm of IT. One member of the Department of Commerce's Innovation Advisory Board even said, "I'm surprised not that there's a failure but that people are surprised there's a failure."

Linda Kinstler writes in the New Republic that the creation of healthcare.gov was constrained by oppressive "bureaucratic regulations" that prevented the government from hiring "the right contractors to build the site," and made overseeing and managing it more difficult.

One of the few functional parts of healthcare.gov was built by a small company that has been turned off by its experience working for the government. Development Seed, brought in as a subcontractor by a Health and Human Services official, won't seek more government work in the future, citing agonizing regulations and paperwork. Its CEO explained, "We don't have proposal writers and lawyers. We have developers."

These oppressive regulations decrease competition by dissuading good, innovative private companies like Development Seed from contracting for the government. Instead, we are left with the least effective companies, like CGI Federal, which made the majority of healthcare.gov's dysfunctional components. CGI spends hundreds of thousands to influence Washington, and makes hundreds of millions from U.S. government contracts.

Maybe it is because Development Seed doesn't spend hundreds of thousands of dollars lobbying, that even if it wanted to bid for the Obamacare website contract, it couldn't have, due to excessive regulations. Centers for Medicare and Medicaid Services (CMS) "limited the competition for the healthcare.gov contract to 16 companies already selected as primary technology providers." Yet, this practice proves archaic, as 40% of large technology projects on all levels of government are "canceled or abandoned," and only 5% "are completed on time and budget."

Because CMS limits competition, government contractors don't have to be competitive, good, or reasonably priced, and get away with using really outdated technology. This is the result of any non-free market system.

This is the problem with government and why the private sector always works better. Government imposes burdensome regulations, often in order to decrease competition for those with money and influence. The solution is for government to control fewer things when possible, or at least to decrease regulations and open the door to more competition.

MIT's Ethan Zuckerman is right in saying, "What government services can be privatized should be, and government dollars should go only towards services, like defense, that we can't pay for in private markets."

The Obamacare website, let alone the ACA, will never be as good as a private sector alternative that embraces, not stifles, the free market. One such alternative, like the American Health Care Reform Act, takes government out of the equation and lets companies compete for customers by lowering prices, increasing quality, and broadening variety. Then sites where you can compare health insurance would pop up, just like in the hotel industry.