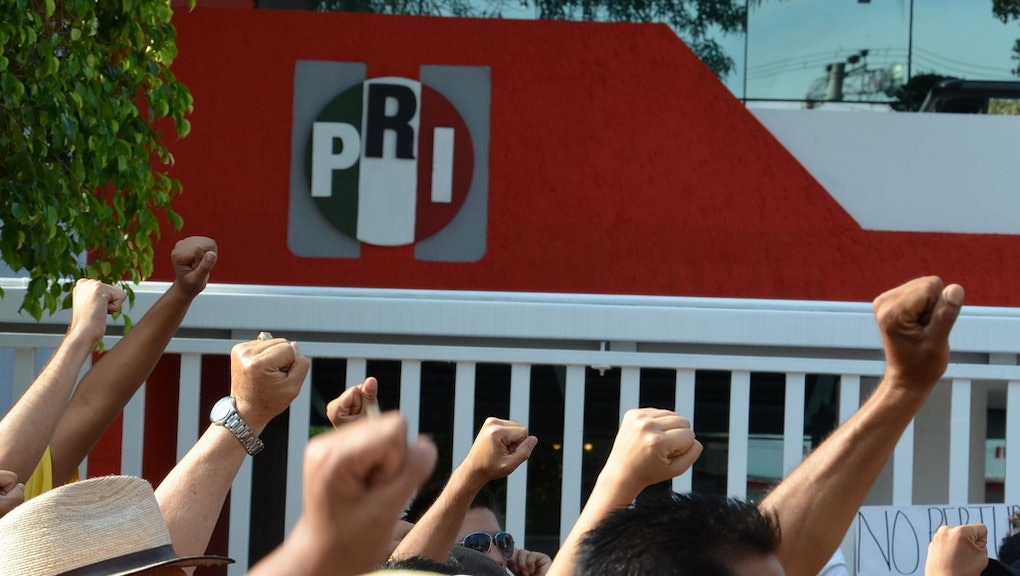 10,000 Protesters Just Marched Against the President of Mexico — Here's Why

On Sunday, over 10,000 protesters demonstrated against the leadership of Mexican President Enrique Peña Nieto on the first anniversary of his time in office, advocating for a change in political administration. Peña Nieto, a member of the Institutional Revolutionary Party (PRI), has been charged with allegations of corruption, militarization and the selling-off of his country's natural resources. Only 44 percent of Mexican citizens approve of his administration, according to USA Today.

Here are four reasons why many anti-government activists in Mexico remain indignant.

On Dec. 1, 2012, Peña Nieto assumed the Mexican presidential office despite the overwhelming evidence pointing to electoral fraud and voting discrepancies during the election. Many polling stations did not return the same number of ballots that were originally provided by national electoral administration officials, and evidence of vote-buying on the part of Nieto's Institutional Revolutionary Party (PRI) surfaced after a watchdog group exposed bribery, according to the Guardian.

Following Peña Nieto's inauguration, thousands of college students, including members of the left-leaning Yo Soy 132 anti-corruption activist group, held protests across Mexico City to demonstrate against monopolized media organizations friendly with the PRI politician that neglected coverage of apparent electoral fraud. Many of the students directly targeted the Televisa media group's biased coverage of the election favoring Peña Nieto, which is the largest broadcasting conglomerate in Mexico, according to Al Jazeera.

Peña Nieto's one-year presidency has been defined by several attempts to privatize Mexico's national oil and gas sectors while attracting foreign corporate investors. This wouldlimit the control the country's domestic energy industry. His overall initiative to denationalize the state-run oil company Pemex would allow private firms to have access to the almost 14 billion barrels of crude oil the country uses for public purposes, according to Press TV. Consequently, private energy investment firms could monopolize access to crucial resources and establish unreasonable prices at their discretion for the purpose of maximizing individual profits, ending almost 75 years of nationally-controlled energy.

4. Mismanagement of Drug Violence and Crime

Drug-related violence and crime continues to haunt Mexico, and Peña Nieto's administration has not done much to solve the issue at its core. Approximately 1,000 people have died each month in drug crimes since the PRI politician assumed the presidency, according to Reuters. Instead of exploring legislation that would allow for government regulation of illicit drugs and medical treatment for those addicted to controlled substances, as done in Uruguay under the administration of President José Mujica, the Mexican government has invested money toward the formation of a 40,000-member militarized police force. Clashes between military police and drug cartels continue to problematize Mexico's domestic safety.