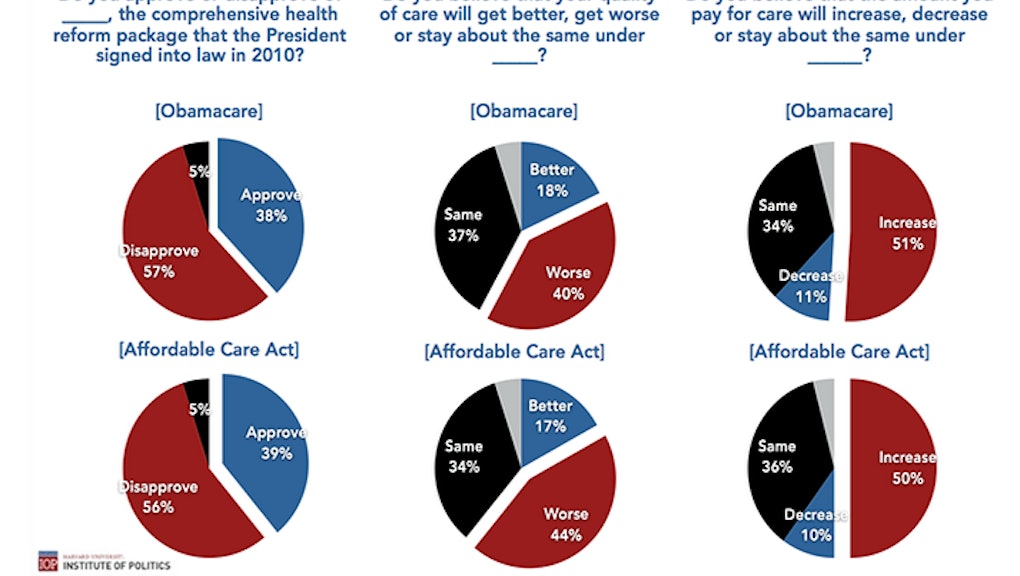 Harvard’s Institute of Politics has released a fall poll from its Survey of Young Americans’ Attitudes toward Politics and Public Service, and it offers an interesting window into the millennial take on government at this particular moment (or rather the moment of October 31 to November 11, when the survey was conducted).

Though it’s never a good idea to put too much stock in one survey, this particular Harvard poll paints a striking portrait of a disillusioned generation, losing faith and interest in the political system.

Here are the 5 Key takeaways:

1. Millennials want to yank their elected officials out of office

The millennial view on replacing President Barack Obama is split by ages. In the 18-24 age group, 52% would recall and replace the president, but only 40% would among 25-29 year-olds. Nearly a fifth of millennials that voted for Obama in 2012 would not vote for him if the election were held again. Good thing Obama doesn't have to run for re-election.

2. Millennial approval of Obama is the lowest it has ever been

Harvard found that only 41% of millennials approve of Obama's job performance, while 54% disapprove. That's the lowest approval rating the IOP has found since the beginning of Obama's presidency and over a 10% drop since this spring.

But Congress shouldn't get too excited. If anything, they're doing much worse than the president. 35% of millennials approve of Democrats in Congress, and just 19% approve of Republicans.

No wonder young people want everyone out of office. They don't think anyone is doing a good job.

3. The youngest voters are leaving the Democratic Party

4. Millennials aren't lining up to vote next year

Just over a third of millennials say they will definitely vote in the 2014 midterm elections. Though midterm voter participation rates are never high, this is down from four years ago, particularly among Black millennials (down 12%).

Millennials are dissatisfied with their government, but they're lacking the motivation or interest to do anything about it. Even if a majority would recall Congress if they could, millennials don't seem amped up to actually do it.

5. The group Obamacare needs most isn't buying in

The Harvard IOP survey shows Obamacare is in dire trouble with millennials. Not only does a majority disapprove of the health care reform, but a majority also believes it'll cause their health care costs to increase, and a plurality thinks the quality of care they receive will decrease.

For a law that hinges on millennial participation, it's clear Obama needs to do a better job appealing to his target audience. As it stands now, less than one third of millennials plan to enroll in coverage.