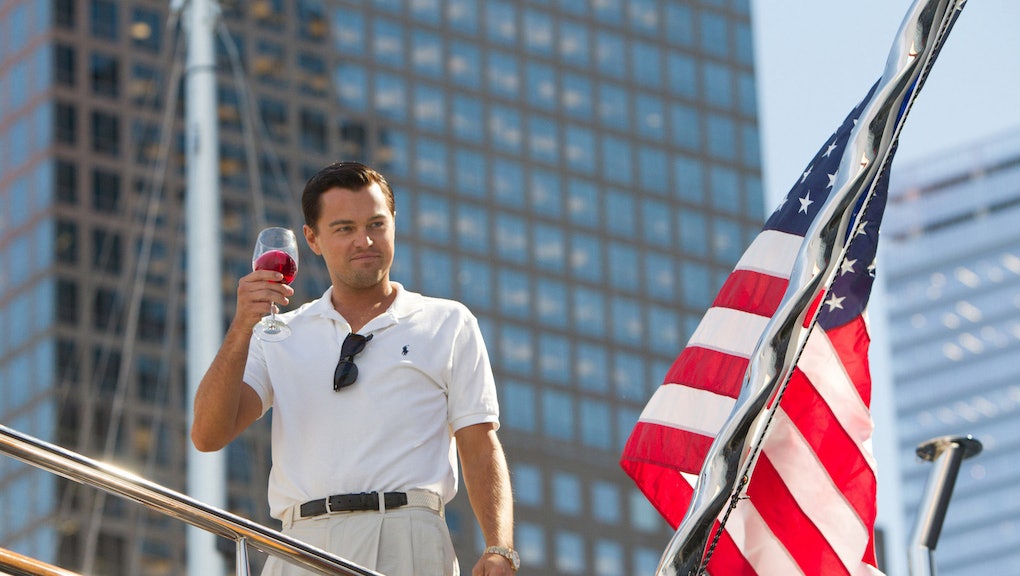 Leonardo DiCaprio Plays the Same Character Over and Over — Here's Why

Sometimes it seems like Leonardo DiCaprio plays the same role in every film.

With the upcoming release of The Wolf of Wall Street, news networks are buzzing about the Oscar potential of another Leonardo DiCaprio-Martin Scorsese collaboration. Yet for such a prominent performer, DiCaprio cuts a controversial figure. It could be that the three-act arc of his career — from promising young actor, to teen idol, to leading man — has given his work a disjointed feel. Perhaps that's why he's yet to win an Oscar. Yet there's a bigger feature connecting many of the characters he's played, beginning with his career-making turn as Jack in Titanic, and culminating with his upcoming role as Jordan Belfort in Wolf of Wall Street. In every role, he seems to be acting out the same drama of the American dream.

DiCaprio's characters are seduced by the promises of rampant capitalism. They are almost always supremely powerful men — or, as in the case of Jack — men surrounded or seduced by great wealth. Frank Wheeler, his character is Revolutionary Road, is unable to resist the comforts of a luxurious corporate position, despite his profound dissatisfaction with the suburban existence that it provides. In The Wolf of Wall Street, DiCaprio plays a banker undone by the same forces of greed and excess that have brought him wealth and power. And he plays the titular character in The Great Gatsby, who, believing the myths of the American dream — that meritocracy is real and that money can buy anything — is destroyed by his idealism and ultimately revealed as a fake.

Each of these great American males enacts the same drama — they chase some dream with such consumptive obsession that they destroy themselves.

Each of these great American males enacts the same drama — they chase some dream with such consumptive obsession that they destroy themselves. These characters represent the defeat of an American dream that never really existed. As Gatsby's creator, F. Scott Fitzgerald himself noted in 1927, "There has never been an American tragedy. There have only been great failures." As in a Greek tragedy, the characters he plays are riddled with flaws that lead to their own undoing — many are ultimately failures. And, like a Greek tragedy, the characters inspire pity rather than revulsion. The third act in a DiCaprio film is always the same — always the same magnificent undoing.

Part of DiCaprio's ability to inspire such pity is the boyish charm that he's preserved even into the latest stage of his career. Although at times his boyishness threatens to undermine his performances, it's also part of a self-confident swagger, a naively idealistic faith in oneself and one's situation, that injects such pathos into his characters' eventual undoing. Though they are eventually corrupted, they never seem jaded.

Yet this pathos is more than a product of DiCaprio's persona — it's also written into the roles he chooses. To say that DiCaprio's characters are malicious or evil deprives them of their significance. They're not exceptionally bad, but only human, making mistakes that we ourselves could emulate. This is particularly relevant to The Wolf of Wall Street. While it is tempting to dismiss the recklessness of some in the finance industry as straightforwardly sociopathic, the fault lies less so with the actions of a few deranged minds, than it does with a system that rewards risky behavior, whatever the social cost. Yet again, DiCaprio's character is punished for believing in something seductive.

DiCaprio has been chosen to portray some of the most glamorous individuals of the 20th century, both real and fictional. Along with DiCaprio's accolades, some critics have complained that his grander performances fail to transcend his youthfulness. Perhaps he consciously works against this criticism when he portrays totemic, aging American figures like J. Edgar Hoover. Yet DiCaprio's naive energy, as well as his cultural caché are his key strength. make him adept at translating historical figures into a contemporary context that make them parables for our own time.

Through DiCaprio's iconic youngness (every character he plays is invested with a bit of Jack), the men he portrays are made into parables for our own modern materialist culture. The allegorical meanings of his films is only encouraged by their marketing. The Great Gatsby and The Wolf of Wall Street have strikingly similar trailers. Both feature fast cuts between scenes of wealth and decadence, underscored by a soundtrack of contemporary hip hop. The message, particularly with Gatsby, is clear: we are not meant to view the films as period pieces, but rather as timeless tales of capitalist excess.

The trailers also point to the possibility of an American dream for a new generation, a dream not tainted by excess, but defined by it from the start. 'More, more, more is never enough' reads the text scattered through the trailer for The Wolf of Wall Street. It's an ethos embodied by many of DiCaprio's characters, from his Howard Hughes, an aviator who flies far to high; to his Hoover, a man driven to ever greater heights of social class and control; to his Gatsby who tries and fails to hide his past behind a glittering facade. As they're crushed beneath the weight of their own desires, DiCaprio's characters show that this dream of untrammeled excess is always a mirage.