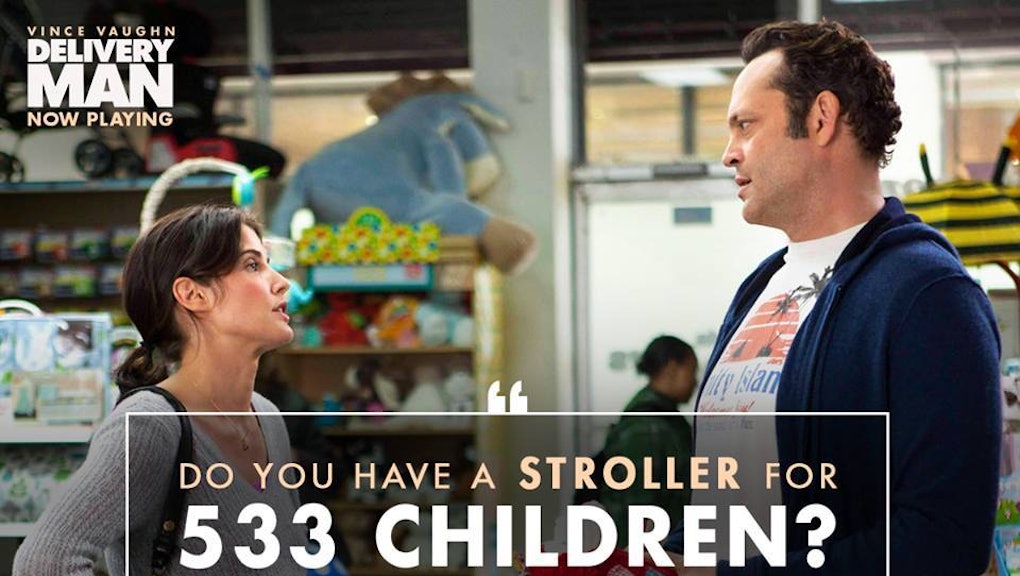 Leo Tolstoy may have said that happy families are all alike, but with the sperm donor film genre, it's clear that Hollywood disagrees. Delivery Man, a new film starring Vince Vaughn as a man who unwittingly fathers 533 children through an excessive amount of sperm donation, is the latest in a trend of movies portraying families created through artificial reproductive technologies. Even MTV has sperm donor babies on board with its new reality television show Generation Cryo, which follows a teenage girl's search for her sperm donor father and biological half-siblings. This surge in the new genre reflects the changing conception of family, and especially parenthood, in our society.

As traditional notions of what it means to be a parent are increasingly challenged in our lives, we are forced to reflect more and more on our reproductive angst. Fertility films such as The Kids Are All Right and The Switch are beginning to ask a question not typically raised on screen: What makes a parent?

In depicting a wide variety of family situations — from single moms, to gay couples, to overenthusiastic sperm donors — fertility films allow for a multiplicity of interpretation as to the definition of concepts such as "parent" and "family." Take The Kids Are All Right: Although the sperm donor played by Mark Ruffalo gets a taste of fatherhood while bonding with his biological children, he ends up royally screwing things up for their family, and earns himself the boot from their lives. Conclusion: Sperm is nice but it's not fatherhood.

On the opposite end of the spectrum is Delivery Man in which Vince Vaughn's character tells his girlfriend (and mother of his 534th child), "Nobody but the father can decide if he is the father or not." Real-life court cases and restraining orders to the contrary, the film imbues its characters with the agency to decide their own parental fates.

Although these films' conflicting messages reflect current debates centered around artificial reproductive technology, they nevertheless fail to adequately address many of the most difficult issues raised by these discussions. Delivery Man, for example, excludes any mention of the parents who raised Vaughn's sperm donor children. We never learn how the parents feel about their kids searching for their donor — whether they are supportive, hurt, or both. We never learn what kind of role the sperm donor dad is allowed to play in the life of his children who are minors. And the film certainly doesn't come close to addressing the disturbing genetic aspect of having 533 children with the same biological father (accidental incest, anyone?)

Sperm donor movies may have paved the way for greater acceptance and understanding of the "new family," but they inevitably neglect the grittier details and more complicated conundrums these families face. For example, are there ever situations where a sperm donor dad should gain shared custody of the child? (A law in California could decide this question soon.) Or, is it ethical to rent a woman's womb? And if a male gay couple decides to have a baby using a separate egg donor and a surrogate mom, does the child of two daddies also have two mommies? We've yet to see the movie that attempts to answer that one.

These issues are obviously difficult to tackle in any film, and they've stumped many families and courts as well. But artificial reproductive technology is still so new and unregulated that we should be asking deeper questions, rather than offering simplified answers. Comedies like Delivery Man and The Switch (in which Jennifer Aniston intends to become a single mom via a sexy blond sperm donor, but instead is duped into using her neurotic best friend's seed) are not necessarily the right vehicles to tackle these issues because audiences expect their endings to be happy and neat. Perhaps someday, instead of using reproductive technology as a formula for situational comedy, writers will begin to create movies that probe more meaningfully into the complicated issues that 21st century families face.