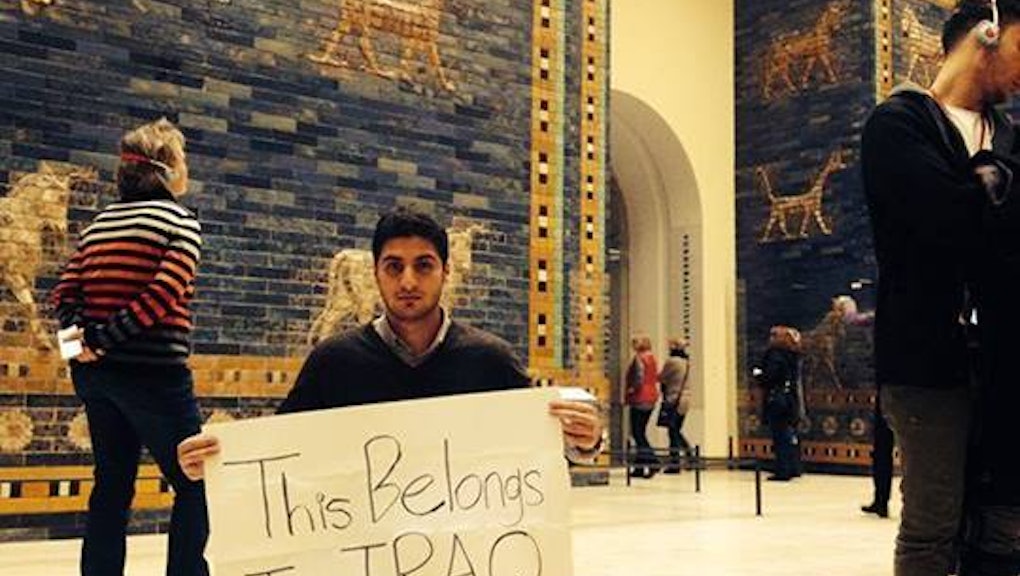 9 Priceless Artifacts Museums Should Return to Their Home Countries

"This belongs to Iraq," reads the poster held by Iraqi student Zeidoun Alkinani at the Babylonian Ishtar Gate in the Pergamon Museum of Berlin.

Excavated and acquired by German archaeologists in what is today Iraq, the Ishtar Gate is one of the many artifacts shipped back to Western countries prior to World War I as part of a larger trend by European colonists across the Middle East. In 2002, Iraqi officials urged Germany to return the gate.

There are still no plans made for its return. The viral image does, however, bring to light the long-argued debate between museums in the U.S. and Europe over ownership of ancient artifacts and the objects' countries of origin.

Excavation site of Ishtar Gate in the 1930s.

Discovered in Rosetta, Egypt by a French officer in 1799, this 2,200-year-old black basalt stone is now a famous artifact is inscribed in hieroglyphic, demotic and Greek and is believed to hold the key to deciphering hieroglyphics and Egypt's past. The stone was acquired by the British when they defeated the French in 1801, and transferred it to the British Museum in London in 1802. Although Egypt has continued to push for the stone's return, the British Museum refuses to budge.

This collection of ancient Greek marble statues, also known as the Parthenon Marbles, has long been the source of a raging debate between Greece and the British Museum. The priceless relics were removed from Athens by British envoy Lord Elgin when he was ambassador to the Ottoman Empire in the early 19th century. It has remained a prized possession of the British Museum since 1816.

UK Prime Minister David Cameron, however, has so far opposed calls to return the Marbles, saying the sculptures are a vital part of the museum's displays. Even UNESCO has intervened and requested both countries to "'join in mediation"' to resolve the long-running dispute.

"They symbolise the very foundation of Greek and European culture, one which is of universal significance," said Greek European Parliament member Rodi Kratssta. "The dismembered sculptures offend our common European heritage and its perception worldwide."

Meaning "mountain of light" in Urdu, the Koh-i-Noor diamond was seized by the British Empire's East India Company as one of the spoils of war in the colonial era. Britain's then colonial governor-general of India arranged for the diamond to be presented to Queen Victoria in 1850. One of the largest diamonds in the world, the 105-carat diamond has been set in the crown of the current Queen Elizabeth's late mother and is on display in the Tower of London.

Despite India's demands for its return "in atone for Britain's colonial past," British Prime Minister David Cameron said the diamond will not be returned. "I certainly don't believe in 'returnism', as it were. I don't think that's sensible," Cameron said. "It's the same question with the Elgin Marbles and all these other things."

Despite Egypt's driven campaign to reclaim more than 5,000 artifacts from around the world, a German foundation rejected on Monday the Egyptians' request to return the 3,400-year-old bust of Queen Nefertiti, the star attraction of the Egyptian collection at the Neues Museum in Berlin, drawing more than 1 million viewers every year.

"The foundation's position on the return of Nefertiti remains unchanged," Prussian Cultural Heritage Foundation President Professor Hermann Parzinger said. "She is and remains the ambassador of Egypt in Berlin."

The bust was discovered by German archaeologist Ludwig Borchardt in 1912 and was taken to Germany the following year. Although Egypt has persistently requested the return of Nefertiti to Egypt since 1930, Germany has ruled out returning the ancient bust claiming that the statue is too delicate to make the long trip home.

"Artifacts, just like people, animals or plants, have souls and historical memories," said Turkey's Culture Minister Ertugrul Gunay, who is part of an aggressive Turkish campaign to reclaim its antiquities from some of the world's largest museums including the Met, the Louvre, and the Pergamon. "When they are repatriated to their countries, the balance of nature will be restored."

One of the artifacts in question — the more than 2000-year-old marble torso called "Old Fisherman from Aphrodisias," which is currently housed in Berlin's Pergamon Museum — has also been requested, but German authorities have so far refused to budge.

"The piece arrived here in 1904 as part of an old collection of antiquities," said Hermann Parzinger, president of the Foundation of Prussian Cultural Heritage. "It was bought from an art market, it was absolutely legal and we can prove it. We see no reason at all which would justify returning it."

Ancient 6th century Byzantine liturgical silverware and other decorative objects known as the Sion Treasure are also among the many items Turkey is seeking to recover from Dumbarton Oaks in Washington D.C., a research institute owned by Harvard University.

Reportedly found in an ancient burial mound in Kumulca, Turkey in the 1960s, the treasure was acquired by the museum in 1966 from a private collector who bought them from George Zakos, a dealer with documented ties to the black market trade in antiquities. Turkey has been requesting the return of the objects since 1968 to reunite them with the rest of the treasure displayed in a museum in Antalya, Turkey.

The scholar Harold Rhode found thousands of moldy artifacts of Iraq's ancient and mostly dispersed Jewish population in the flooded basement of Saddam Hussein's service headquarters in Baghdad with the U.S. invasion force in 2003. He is now fighting to prevent his findings from being returned to the Iraqi government.

Likening the return to "giving the personal effects of Jews killed in the Holocaust back to Germany," Rhode has even launched a campaign to halt the transfer and is supported by several American Jewish groups and members of Congress arguing that the findings belong to Iraqi Jews and not the Iraqi government.

Currently on display at the National Archives in Washington through Jan. 5, the pieces include a 400-year-old Hebrew Bible, a Torah scroll fragment that includes parts of the Book of Genesis, a Zohar from 1815, a Babylonian Talmud from 1793, a lunar calendar in Hebrew and Arabic from 1972-3 and other books, personal papers, and sacred texts.

Britain was part of the Eight-Nation Alliance that put down the Boxer Rebellion in the late 19th century, ransacked the Forbidden City, and destroyed the Old Summer Palace in Beijing in 1860.

The Department for Culture, Media & Sport in London said, "Questions concerning Chinese items in museum collections are for the trustees or governing authorities of those collections to respond to and the Government does not intervene."

Britain, however, has continued to reject requests to return artifacts from other countries while the British Museum argues that these treasures "are world heritage objects and are more accessible to visitors in London."