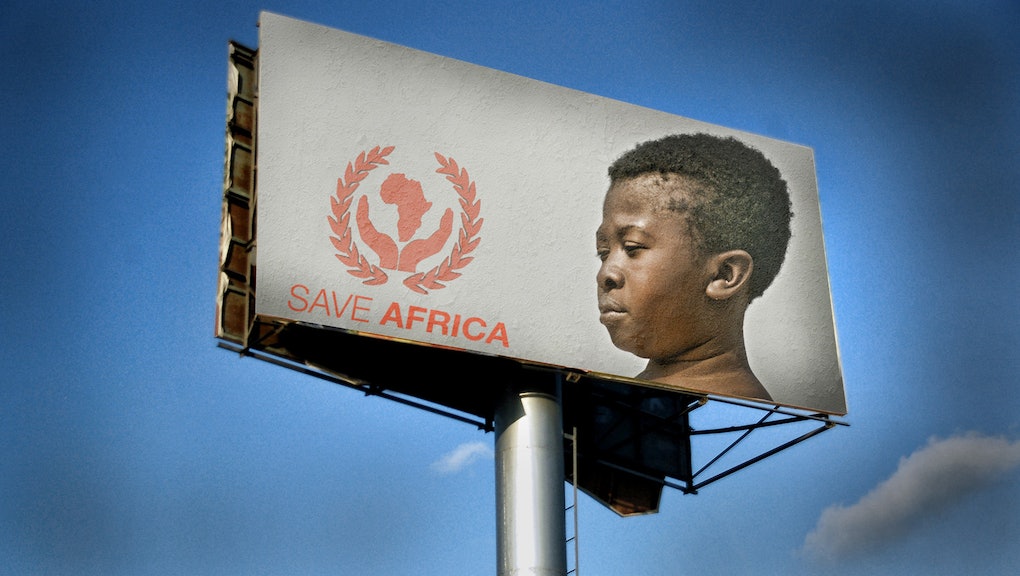 Meet the Africans Rallying Together For An Important Cause: Cold Norwegians

The holiday season is all about giving, and the world is not short of deserving charitable causes. Buy Christmas gifts for less fortunate neighbors, further cancer research, feed a Haitian child for a week, sponsor a Namibian orphan's school fees, or … send radiators to cold Norwegians?

A group of South African students, along with a Norwegian Aid agency, are using a cleverly satirical campaign to turn the tables on how we think about aid. "Radi-aid: Africa for Norway" seeks to help freezing Norwegians by urging Africans to send them radiators.

Their new charity single, (written by "development-country" band Bretton Woods) shows images of Norwegians stuck in snow banks and trudging through blizzards while a group of cheery South African aid workers insist, "A lot of people aren't aware what's going on [in Norway] right now. It's kind of just as bad as poverty is you ask me … People don't ignore starving people, so why should we ignore cold people? Frostbite kills too."

We've all seen the commercials: poor, barefoot, and fly-covered children, staring achingly into the camera while white men plead with you to help them. While these commercials may pull enough heartstrings to bring in donations, what kind of impression are they leaving on viewers?

Likewise, Radi-aid asks, "Imagine if every person in Africa saw the Africa for Norway video, and this was the only information they ever got about Norway. What would they think about Norway?"

Africa for Norway's goal is not to discourage people from giving to aid, but rather to shift the paradigm of development fund-raising.

A spokesperson for the Norwegian Students' and Academics' International Fund, the primary organizers behind the project, explain, "We want to mess with the stereotypes people have. The problem with stereotypes are not that they are untrue, it's that they're incomplete. Norway is, in fact, a relatively cold country. But I think most Norwegians would be rather frustrated if that was the only thing Norway was known for. I think a lot of people would agree that the same goes for most African countries. Even though fundraisers tell a necessary story, their message is very incomplete."

And they're not the only ones fed up with traditional approaches to aid. "Drive-aid" and "Pimp my aid worker" are similar spoofs on charitable cliches.

To make their point, Africa for Norway sponsored the Rusty Radiator Awards. Followers "donated their stereotypes" by nominating the most damaging charity fund-raising videos of the season. Among the four nominees were 50 Cents' Street King Energy Drink (one energy shot = one meal for a child), and UNICEF's Save Children's Lives commercial.

Announced on Tuesday for Human Rights Day, their official selection for the worst fund-raising video went to Child Fund International from Canada.

The jury explains their decision: "In this video, children can not speak for themselves because they are 'too poor for words.'" This claim is beyond offensive as itpresents the Western donor as the savior. In addition, the video gives you the impression that just 92 cents a day will save the life of the child you sponsor. When only addressing poverty, structural inequalities, lack of proper health systems and other issues become so simple!"

Africa for Norway also awarded a Golden Radiator to the most creative and constructive fund-raising campaign, without over-used tropes about Africans. The winner, SYPO Microfinance from the UK, along with the other three golden radiator nominees, created this Jessie J lipdub to prove that there is a constructive and positive way to talk about development, charity, and the less fortunate "other."

But if these "damaging" videos are convincing people to turn over their hard earned pay checks, are they really that damaging?

Africa for Norway says, resoundingly, yes. Not only do common aid stereotypes diminish the dignity of all Africans by portraying them as helpless, but they also fail to address larger, structural inequalities that lead to much of the poverty across the developing world (refer to the "Bretton Woods" joke).

Last year, American gave over $316.2 billion to charitable causes, which marks a rise from the previous year. This leads to the question: Which videos generate the most donations? Are Americans as compelled to give money to Africans they see as their peers as they are to give to those they pity?