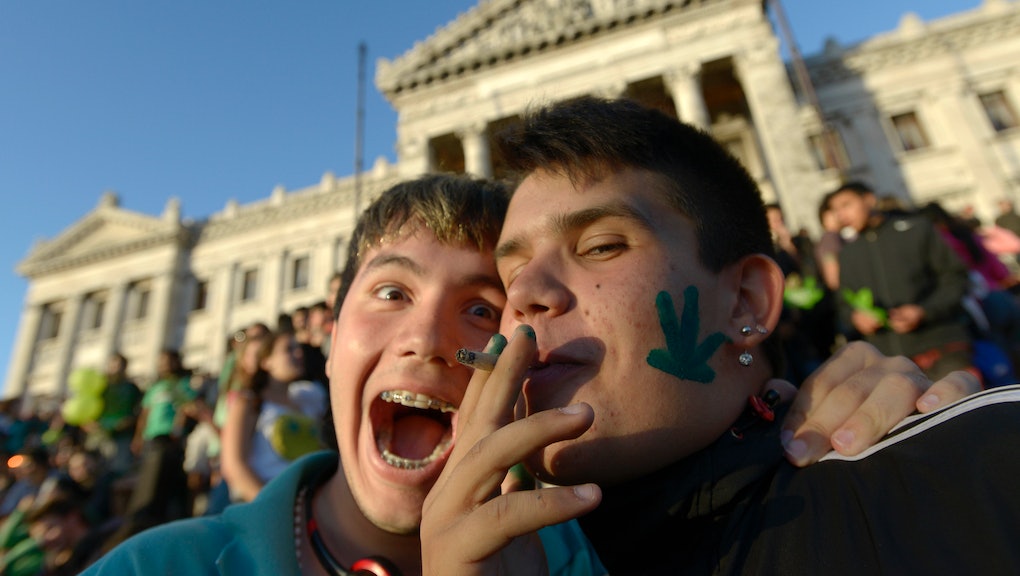 The First Country in the World Has Legalized Marijuana

The news: Uruguay has become the first nation on the planet to legalize the growth, sale, and consumption of marijuana late on Tuesday in a groundbreaking move sure to be closely scrutinized by the international community.

The Uruguayan senate passed the bill 16-13 with the intention of controlling addiction and black-market drug sales which fuel violent drug cartels. 78-year-old President Jose Mujica, whose campaign platform was explicitly pro-legalization, is widely expected to sign it into law despite opinion polls indicating up to two-thirds disapproval from the Uruguayan population.

"Today is an historic day. Many countries of Latin America, and many governments, will take this law as an example," claimed Sen. Costanza Moreira of the governing Broad Front coalition.

"We begin a new experience in April. It involves a big cultural change that focuses on public health and the fight against drug trafficking," said Uruguay's first lady, Senator Lucía Topolansky.

The legislation will allow Uruguayans over the age of 18 to buy a maximum of 40 grams (1.4 ounces) each month from registered marijuana pharmacies after they register for a government database. The law will take 120 days to take effect, after which citizens will be granted the right to grow up to six marijuana plants a year (about 17 ounces' worth), and form smoking clubs of 15-45 members which can produce up to 99 plants a year.

"It is understood that a regulation-based policy has positive consequences for health and public security, given that, on the one hand, it can produce better results when it comes to education, prevention, information, treatment and rehabilitation in relation to the problematic uses of drugs," argued Sen. Roberto Conde, also of the Broad Front. "On the other hand, it helps fight drug trafficking, which fuels organized crime and criminal activities that affect the security of the population."

Uruguay is a country in South America.

What does this mean for American stoners? Other than what's sure to be a series of angry condemnations from the DEA, not much ... yet. If Uruguay's legal marijuana model is successful, though, the experiment will add significant punch to reform advocates who will be able to point towards both legalization overseas and recently passed state-level legalization initiatives in Colorado and Washington as evidence that the sky does not, in fact, fall when the police stop kicking in the doors of marijuana smokers.

CNN's Hannah Hetzer has the three reasons why Uruguay is making this historic move, including that it's the smart thing to do if Uruguay wants to reduce crime and violence, that the regional policy consensus is swinging towards legalization, and that Uruguay is used to doing exceptional things, being at the forefront of progressive policy ranging from womens' right to divorce to gay adoption.