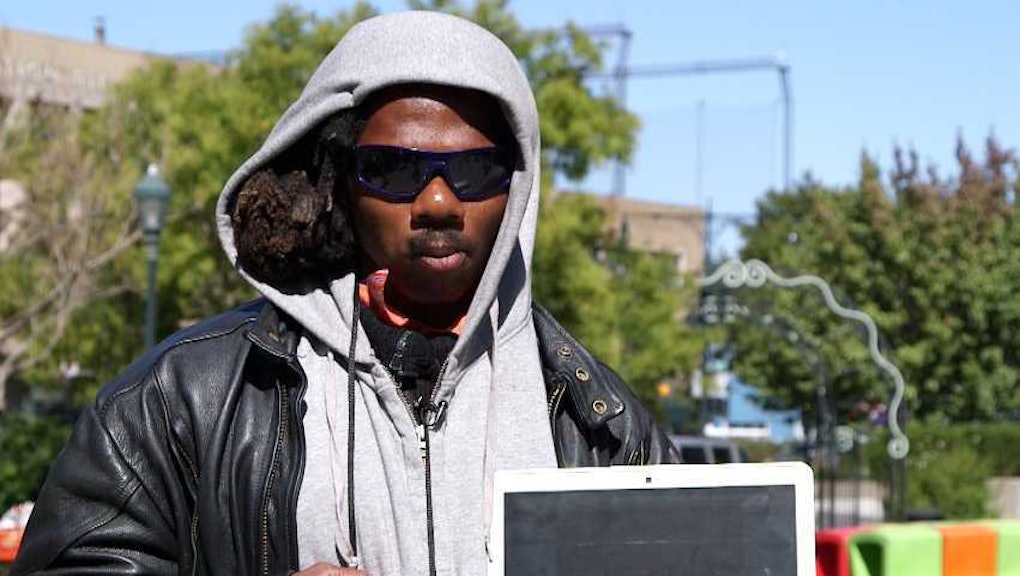 Seems Like a Normal App, Until You Realize Who Made It

The news: Trees For Cars is a carpool app that aims to make it easier for New York commuters to share rides and improve the environment. Drivers select a place on a map to meet ride-shares, and potential carpoolers are selected. The users can then choose whether or not they'd like to meet up for their ride. It tracks how much CO2 is saved each time, encouraging competition.

The app is now available on the Android and iPhone app stores for $0.99, and has hundreds of reviews.

It sounds like your run-of-the-mill app, until you realize that its developer, Leo Grand, is homeless.

The background: After losing his job at MetLife in 2011 and being forced out of his apartment, Grand had nowhere to go. But programmer Patrick McConlogue came up with something:

"The idea is simple. Without disrespecting him, I will offer two options:

2. I will come back tomorrow and give you three JavaScript books, (beginner-advanced-expert) and a super cheap basic laptop. I will then come an hour early from work each day — when he feels prepared — and teach him to code."

McConlogue was blasted in the media by people who called his proposal insensitive. Given the choice between the two, Grand eagerly took the second option.

"I can go through $100 in a few days," Grand said. "But he told me I could have a laptop and learn how to do something and I figured it could turn into something more."

McConlogue met Grand every day for an hour to teach him how to code, while Grand practiced for three to four hours on his own. A local apartment building's doormen let him charge his laptop. After two months of lessons, their work became so intense that they had to focus on app development full-time. McConlogue's boss, John Katzman, let them work for the last five weeks of the four-month development cycle out of their company Noodle's headquarters.

"Trees for Cars is a great way to build relationships, strengthen communities, help each-other financially and energy wise, all under the umbrella of saving the environment," Grand said in an official statement.

According to McConlogue, he's been scaling his program, and now has 150 volunteers across the world to spend an hour each day for two months teaching others to code. He still hasn't quite figured out how to keep up with the demand.