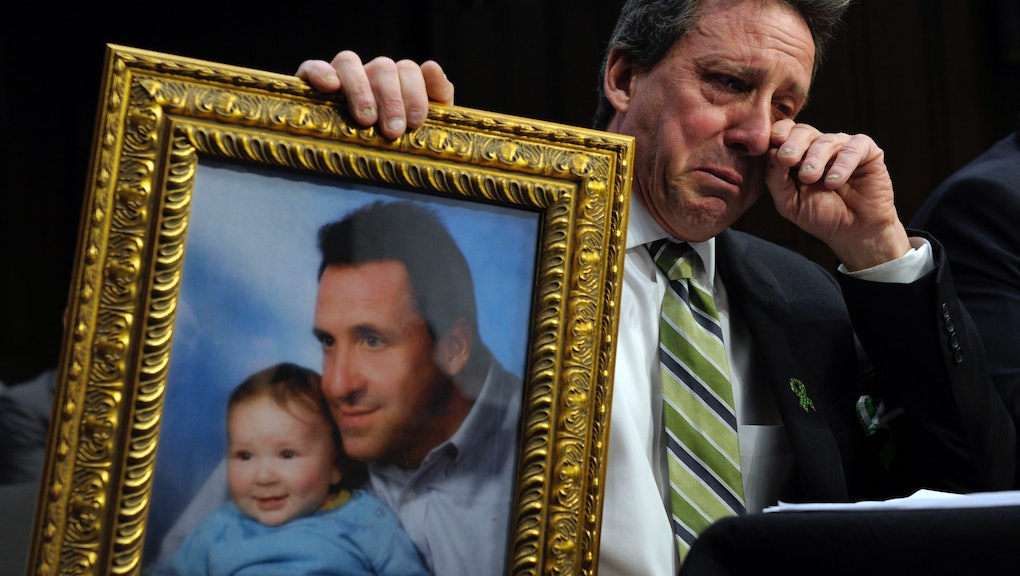 I went to a gun shop near Newtown, Conn. on a frigid Thursday night in mid-December, just before the one-year anniversary of the Sandy Hook massacre. A man named Frank was working, and his friend John, 69, was in the back smoking a cigarette. (Both men preferred to not give their last names.) Several of John's kills — boar, ram, buffalo and deer — were displayed proudly across the wall. Frank, a Vietnam veteran and former detective, was polishing a beautiful rifle behind the counter before getting ready to close up the shop for the night.

Frank fervently expressed that the events of that day were unimaginable tragedies. He also argued that limiting access to guns was not the answer. Many Americans must agree: In December, of the roughly 1,500 gun bills that were introduced, only 109 became law, and 70 of those laws actually loosened gun restrictions rather than tightened them.

Connecticut is one place where the gun laws, unsurprisingly, became stricter. In April, the Connecticut State Senate approved a wide-ranging bill banning the sale of gun magazines with a capacity of more than 10 rounds, requiring background checks for private gun sales and tightening registration laws. The changes made the state's gun laws among the strictest in the country.

Frank is in the unusual position of seeing the changes firsthand. John went behind the counter to the ammunition and grabbed a box of .22 cartridges off the shelf. "That $20 box, up until about two weeks ago, was selling for $100. That's how scarce it was," he said. The phone rang. It was a man asking if Frank had any "pre-bans" (rifles manufactured before 1994, now prohibited) in stock. Frank answered no and hung up. "See?" he turned to me. People were looking for guns they could no longer get.

Frank looked directly into my eyes through his glasses. "There are a lot of things in life you don't know about yet." I nodded. Paused. Then asked, "Does America have a gun problem or not?"

"America has a problem. Period," Frank said. "Who knows the psychological path [Lanza] took? The point is we're not doing anything to protect the children. They banned some guns and they think that's it. That's not the case."

He explained that banning a certain type of gun will not prevent another tragedy. Tightening registration laws and background checks would not have prevented what happened on that horrific day either. Nancy Lanza legally owned her firearms; her son took them.

Newtown ignited a major national conversation about gun control. Many expected it to be the impetus for major action to decrease gun violence in this country, especially after President Obama vowed to make it a "central issue." Sadly, there has been no real reduction in the number of school shootings since Sandy Hook. The Associated Press reported, "Experts say the rate of school shootings is statistically unchanged since the mid- to late-1990s."

On February 12, Mayors Against Illegal Guns and Moms Demand Action released a joint report stating that there have been 44 school shootings in the 14 months since Sandy Hook. The shootings, which include fatal and nonfatal assaults, suicides and unintentional shootings, resulted in 28 deaths. An Associated Press analysis revealed that there have been 11 shootings during this school year alone.

That night at the shop, Frank stated his bottom line: "They've done nothing to protect our children." Forty-four school shooting incidents and 28 needless deaths since Sandy Hook suggest that, unfortunately, he might have had a valid point.

Gun laws are complicated and there are strong arguments on both sides of the debate. California has some of the strictest gun laws in the country. But of the 44 school shootings since Newtown, three were in California, including a June incident in Santa Monica that left five dead. On the other hand, it's simply too early and too difficult to tell if, for states like Connecticut, shootings were prevented due to new legislation.

Either way, 44 school shootings in the 14 months since Newtown is unacceptable. This is not a state-by-state fight. It's a fight that should concern and outrage us as a country. And it's a fight that we're losing.