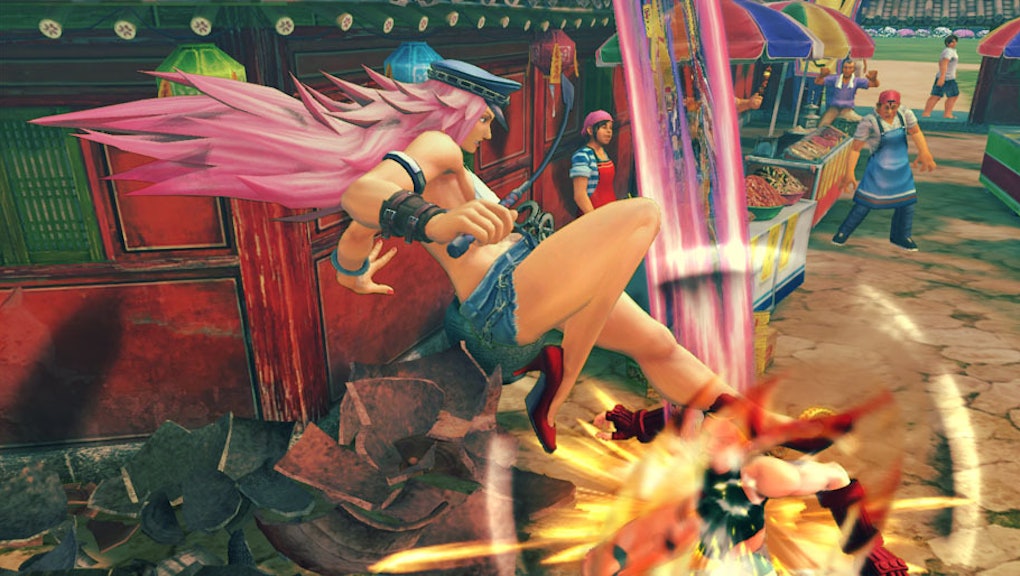 Ultra Street Fighter 4: Gaming's Most Controversial Trans Character is Back

Videogame developer Capcom recently announced its plans to release Ultra Street Fighter IV, the latest update to their classic fighting simulation franchise. Among the four additional characters announced as part of the update is Poison — a post-op transsexual woman who is one of the most controversial characters in the gaming world.

Poison is a character that Capcom has never quite gotten "right." She originally debuted as a villain in the arcade classic Final Fight, but when releasing the game in America, developers feared potential lawsuits from feminist groups that were outspoken about violence against women (why Japanese feminists were seemingly a-okay with this remains to be seen). To quell potential outrage, Poison (and her duplicate character, Roxy) were re-imagined as post-operative transsexual women. The message inherent in all this transformation was, of course, that changing the characters' sexual identity somehow made it more acceptable to hit her.

Some versions of the game edited Poison and Roxy's clothing, while others removed them altogether, replacing them with cisgendered male thugs Billy and Sid.

To this day, there seems to be confusion at Capcom as to what kind of character they want Poison to be. In 2007, Producer Yoshinori Ono stated that in "North America, Poison is officially a post-op transsexual." However, "in Japan, she simply tucks her business away in order to look like a girl." Four years later, he backtracked, basically saying that whether she is a man or a woman is up to the player. "It's interesting, because it almost takes on a sort of Rorschach test," he said. "If you go into it with the preconceived notion that she's a woman, the way she talks, the way she moves, you'll see all of that as being very feminine. If you go in with the preconceived notion that she's not, her actions and mannerisms will seem the other way to you. So, it's very open-ended."

Quotes from an early build of Capcom's crossover fighter Street Fighter X Tekken such as, "Your looks really can be deceiving. I'll be careful not to fall into your trap," and "You're not very lady-like at all! I felt like I was fighting against a guy…" were removed from this latest version of the game, but Poison's sexual identity remains a defining part of her character. She is still frequently told that she "smells like a man" and is attractive because her suitor doesn't "sweat the small stuff." She's even called a "freshly recruited" kunoichi (female ninja).

Unfortunately, Capcom is far from alone in its rather idiotic approach to gender. The gaming industry at-large has a serious problem in that it routinely sexualizes violence, specifically against women. While most games aren't as blatantly misogynistic as something like Duke Nukem Forever — in which players actually target sexual body parts — too many still contain heavily sexualized imagery to complement their violence. One need look no further than the trailer for Hitman: Absolution or the promotional poster for Soul Calibur V as proof. As the women are beaten, their chests rock back and forth, and the camera focuses on fetishized areas such as the thigh and rear. The issues with their clothing are self-evident.

Perhaps the worst part of all this sexualized violence is the fact that there's a sanctimonious element to it. The "good" women — those who are depicted as virginal young ladies or wholesome housewives — don't get beaten to a pulp. Those who are facing the punches are typically scantily clad femme fatales because they evidently deserve it.

Unsurprisingly, Poison falls into the latter category. In Street Fighter IV, a main character's wife stays at home, brings him tea, and is expecting his child:

These are the female characters that fight (Poison is on the left):

The fact that Capcom continues to leave Poison's gender up for debate betrays an extreme lack of sensitivity. And given the violent reality that trans men and women continue to face, the implication that players feel more at ease beating up a transsexual woman is downright deplorable.