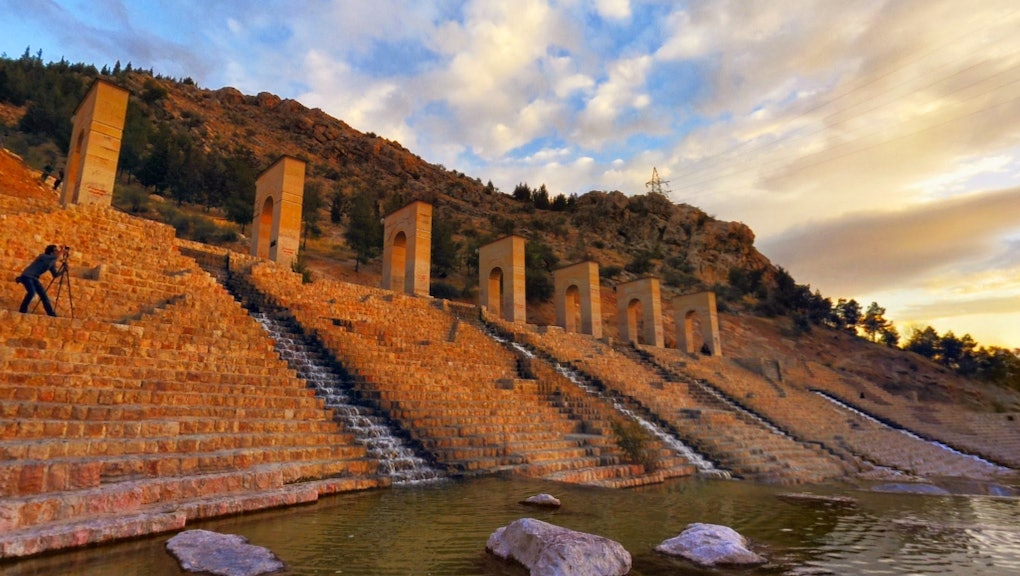 8 Gorgeous Panorama Views From Places Most Americans Will Never See

In an age of jet travel, open borders, and relative global stability, Americans are able to travel to more destinations than ever before.

You can't travel to Cuba. You won't be let into Iran. North Korea is a no-go. You're not going to make it very far in Syria. Yemen just isn't the place for you.

These are the places most Americans will never see (unless you're in the CIA). Thankfully, we have Google, which has provided these gorgeous interactive panoramas for you to explore.

It's Not Times Square: North Korea, of course, has the dubious reputation of being the most isolated and brutal nation in the world. Still, between 1,500-4,000 Western tourists visit North Korea each year, along with thousands of Asians. Americans are technically permitted into the hermit nation (see Dennis Rodman), but the State Department has advised U.S citizens not to travel to North Korea, noting "the risk of arbitrary arrest and (long-term) detention of U.S. citizens in North Korea." LOL.

Paradise Lost: The Australian government sums up the travel situation in Yemen perfectly: "We advise against all travel to Yemen due to the very high threat of kidnapping and terrorist attack. The security situation in Yemen is currently highly volatile."

Yemen, in recent years, has become the new it-place for international terrorism. The State Department urges U.S. citizens to "defer travel to Yemen and those U.S. citizens currently living in Yemen to depart immediately."

The Best Spring Break You'll Never Have: Cuba is a short 110-mile swim from Florida. Total flight time between Miami and Havana is about 30 minutes. Yet Cuba — with its famed rum, cigars, mojitos, and beaches — is one of the few desinations U.S. citizens have never had the opportunity to visit, due to Cold War-era travel restrictions against the Communist regime.

Not Such a Bad Place: The U.S. does not have diplomatic relations with Iran, and has considered Iran part of the "Axis of Evil." The State Deparment warns U.S. citizens to "carefully consider the risks of travel to Iran ... U.S. citizens may be subject to harassment or arrest while traveling or residing in Iran."

While the popular image of Iranians is of an irrational people bent on war, this 3-minute video completely dispells that notion. So does this beutiful panoramic of Quran Gate, in the historical Persian city of Shiraz.

You'll Probably Never See This: Also in Iran, the Sheikh Lutfollah Mosque is an architectural masterpiece in Persian architecture, standing in Isfahan, Iran.

Untarnished Beauty: The picture for U.S. citizens visiting Saudi Arabia is not pretty: The State Department warns, "given that terrorists may seek predictable targets, U.S. citizens should always be aware of their surroundings when traveling or visiting commercial establishments frequented by Westerners." Also, Mecca is closed to non-Muslims. this holy site is intended to provide a place of peace and refuge for Muslim believers, and 15 million Muslims visit Mecca annually. Given that only 0.8% of the U.S. population is Muslim, this is a place most Americans will simply never see.

Why You Shouldn't Go: The Syrian civil war has raged since April 2011, and the death toll reportedly reached 120,000 in 2013. In August 2013, Bashar al-Assad's government launched a chemical attack against a Damascus suburb, like the one pictured above. It was a prolouge to a more severe chemical attack launched two weeks later in the Ghouta region, which killed between 281 and 1,759 people and sparked an international crisis, almost leading to Western intervention. Needless to say Americans are not traveling there anytime soon. According to the State Department, "The security situation remains volatile and unpredictable as an armed conflict between government and anti-government armed groups continues throughout the country, along with an increased risk of kidnappings, bombings, murder, and terrorism."

Wild, Wonderful, Palestine: The U.S. does not recognize the state of Palestine, which is divided into two parts — the West Bank and the Hamas-controlled Gaza Strip. The U.S. considers Hamas a terror organization. While the West Bank is not under Hamas' control, the State Department advises U.S. citizens against traveling to there as well. "Vehicles are regularly targeted by rocks, Molotov cocktails, and gunfire on West Bank roads. U.S. citizens can be caught in the middle of potentially dangerous situations, and some U.S. citizens involved in political demonstrations in the West Bank have sustained serious injuries." Sounds like a party.

Editor's Note: This story has been updated to remove language that was used without attribution to Wikipedia and Al-Akhbar. We apologize to our readers for this violation of our basic editorial standards. Mic has put in place new mechanisms, including plagiarism detection software, to ensure that this does not happen in the future.