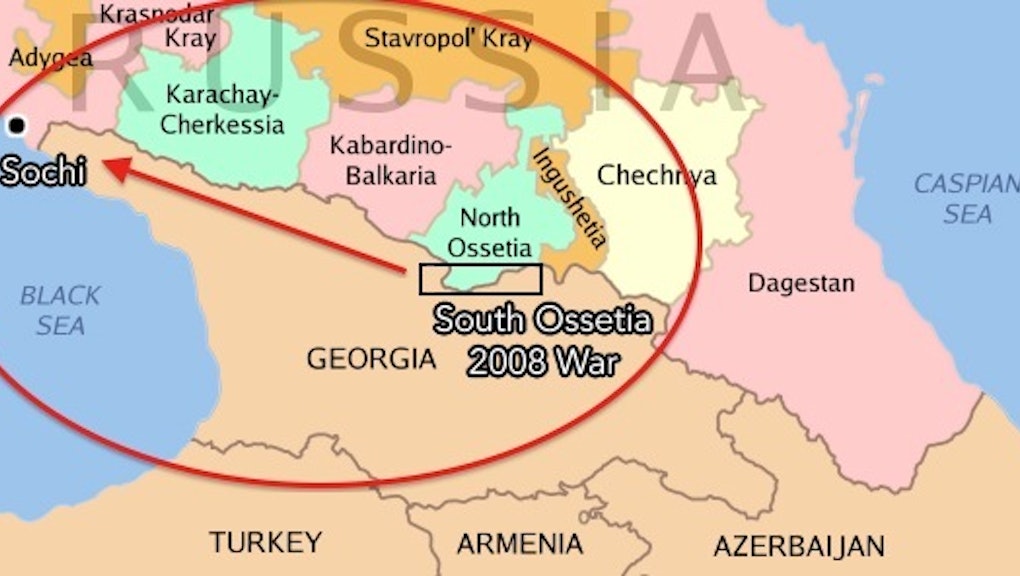 While there is certainly no love lost between Obama and Russian Putin, the decision by the White House to send zero high-ranking officials isn’t a statement on LGBT rights, it’s a confirmation of very real security concerns.

Back in 2011, the regional governor for Sochi, Aleksandr Tkachev, said at a public meeting that there were still much to be done to prepare Sochi for very real terrorist threats.

“If we do not build a solid wall of security, not only for the athletes and guests at the Olympics, but also for Sochi residents, then we risk losing everything,” said Tkachev. “But for now, unfortunately, there is an enormous distance between what must be and the current reality."

Sochi is located in Russia’s southwest, sitting scenically on the Black Sea, barely a rocket flight away from the Georgian border and the still-tense breakaway Republic of Abkhazia (the Olympic park is less than five miles from the border). Why does this matter? Because odds are good that Abkhazia and northwest Georgia more generally are a ticking terrorist time bomb that was set back in 2008, waiting for the Sochi games to go off.

The reason for the war’s outbreak isn’t relevant and doesn’t explain the Obama administration’s Sochi decision, but the fallout from the war absolutely might.

When Russian tanks rolled into Abkhazia en route to sovereign Georgian territory, the Georgian armed forces left their posts all along the Georgian border and massed near Ossetia in preparation to repel a potential Russian invasion.

Why does this matter? Because, Georgia shares borders with the now Russian republics of Chechnya, Dagestan, and Ingushetia — the Caucus states that were the site of two bloody campaigns by the Russians against Islamic militants seeking independence known as the Chechen Wars. The wars left hundreds of thousands dead and resulted in brutal terrorism campaigns carried out by Chechen rebels in response to Russia’s crackdown.

American and NATO forces helped secure Georgia and Georgian borders following Georgia’s independence in 2003 but the country’s sovereignty has been a primarily Georgian concern since then. The 2008 war gave the Islamic militants and terrorists of the caucasus unguarded borders and an open invitation to make their way into democratic and peaceful Georgia to set up camp and lie in wait for the 2014 Sochi games.

Of course, all of these incidents didn’t happen in a vacuum. Security experts within Russia, Georgia, and the United States were and are fully aware of the potential risks posed by anti-Russian Muslim extremists from the caucasus. Major suicide bombings leaving dozens dead carried out by terrorists from the area as recently as 2011 underscore the reality of the terrorist threat.

All individuals who receive formal Olympic accredidation, including everyone from athletes and journalists to official visitors and legal personnel, will have their phone and internet connection records stored for three years and accessible on an as-needed basis by Russian security services. Visitors purchasing tickets have to submit passports and other personal information for background checks prior to arrival.

State security services are also staging mock counter-terrrosim exercises in the city itself and the Federal Security Service (Russia's successor to the KGB) has purportedly developed a thousands long "blacklist" for indivudals not allowed into the country for this event.

While the fight over LGBT rights certainly provides great political cover and a diplomatic opportunity for the Obama administration to make a policy statement, the reality is that the administration’s decision to not send the president, first lady, vice president, or any member of the cabinet more likely reflects very real security concerns rather than pro-LGBT diplomacy.