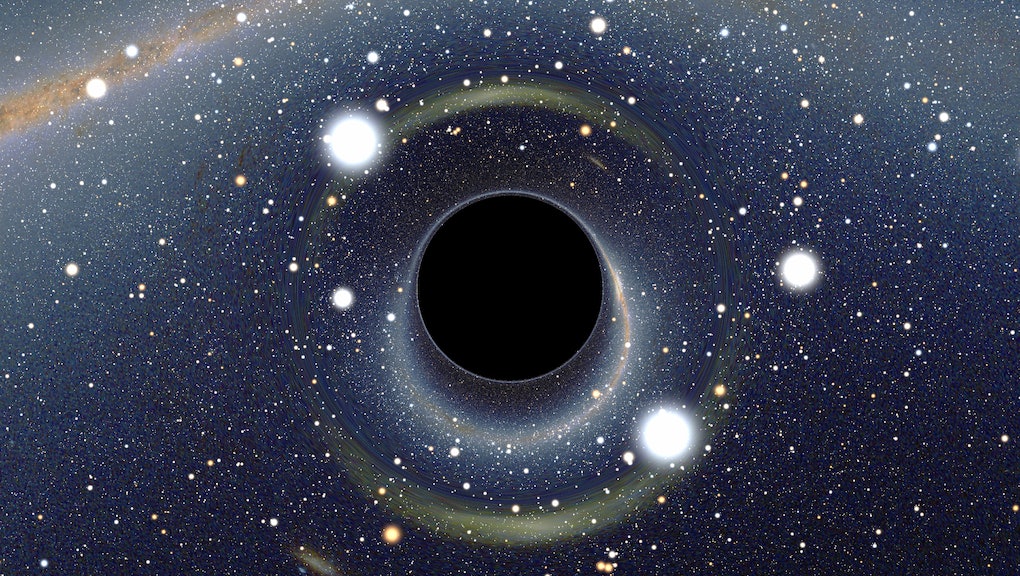 We May Soon Have Our First Image Of a Black Hole

The news: No one has ever actually taken an accurate image of a black hole - for obvious reasons, as the center of a black hole has infinite curvature and matter is compacted into infinite density under the yoke of infinite gravity. The gravitational forces surrounding a black hole are so strong that not even light can escape, making it understandably difficult to capture a polaroid. It's only possible to observe a black hole beyond its event horizon via its effects on other matter or energy.

But physicists have long known there's a supermassive black hole at the center of the Milky Way, four million times the mass of the sun, though they haven't been able to see it. The European Research Council has given $19.3 million to the creators of the slightly-misleadingly named BlackHoleCam, which hopes to catch an image of the black hole's event horizon by seeing how it casts a shadow over radio wave emissions given off as matter is sucked in.

BlackHoleCam hopes to accomplish this feat via an approach called Very Long Baseline Interferometry, in which multiple observatives will focus on one object, feeding their accumulated data into a supercomputer. It will also collaborate with the America-led Event Horizon Telescope. Essentially, the efforts will use multiple points on the planet to turn earth into one massive telescope.

"While most astrophysicists believe black holes exist, nobody has actually ever seen one," said BlackHoleCam investigator Heino Falcke in a statement on Dec. 17. "The technology is now advanced enough that we can actually image black holes and check if they truly exist as predicted: If there is no event horizon, there are no black holes."

Cool. And physicists will combine the data from the black hole shadow and the motion of pulsars and stars around Sagittarius A* with incredibly complicated computer simulations testing current theories about the behavior of light and matter around black holes. That will help inform scientists about whether or not it's actually a black hole at the center of our galaxy, as the majority of physicists believe, or an object with similar properties.

What will we learn? The study should unveil a wealth of information about black holes. If we're lucky, it might put us one step closer to uncovering the answer to what happens when you fall into a black hole. The two leading theories are that you'd drift around for a few weeks before being ripped to shreds by gravitational forces (or "spaghettified" as your feet are pulled in faster than your head) or that you'd catch fire from Hawking radiation.