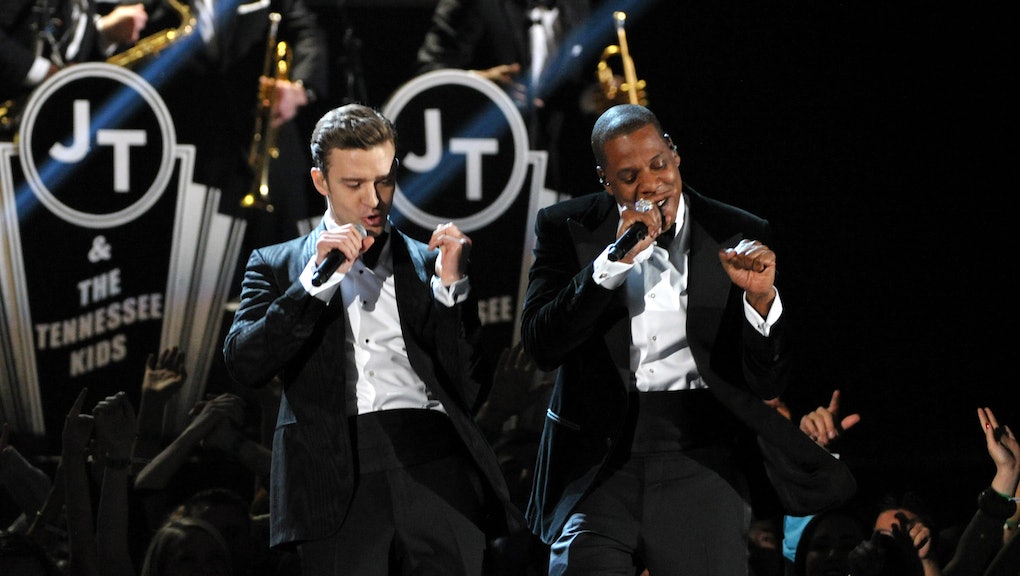 The 5 Most Beautiful Celebrity Bromances Of 2013

Saturday Night Live viewers are in for a special Christmas treat this weekend: Jimmy Fallon and Justin Timberlake will be appearing on the show for their second and fifth times respectively.

This will be the latest in a series of collaborations of the creative, original, hilarious and talented duo: they have made fun of hash-tag conversations, played brothers in the SNL skit "The Barry Gibb Talk Show," danced in "Evolution of End Zone Dancing," and performed several installments of History of Rap.

Justin Timberlake was probably the most-talked about artist of the year, releasing both parts of his much-anticipated The 20/20 Experience. Jay-Z's verse on lead single, "Suit & Tie," set the tone for a classy 2013.

In return, JT's collaboration on Jay-Z's "Holy Grail" was pretty stellar — it was just nominated for a "Best Rap/Sung Collaboration" Grammy. With their shared tour, the Legends of Summer, their bromance reached uncharted heights of ratpack class and love.

The Wolf of Wall Street marks the fifth time that this duo has worked together, and with good reason. All four of their previous collaborations — Gangs of New York, The Aviator, Shutter Island, and The Departed — have been incredible successes.

In this year's three-hour epic, DiCaprio plays the role of Jordan Belfort, a Wall Street trader who made his millions in his mid-20s and leads a life of excess. The movie centers on the extravagant lifestyle and high-rolling shenanigans that Belfort engaged in before being sent to prison for securities fraud. Tipped as one of the hot contenders at the Golden Globes, the movie has already been named one of the best movies of the year, and is yet another not-to-be-missed collaboration from the most serious bros of all, DiCaprio and Scorsese.

Who could forget the hilarious spoof of Kanye West's "Bound 2" music video? In the three weeks since its release, it has already received 7 million views — nearly half the number of the original. This is the rare spoof that is as classic as the original.

This was only the latest in a year of great work between the two. Most notably, they starred in This Is the End, a movie that was, more or less, about their friendship.

Due to be released on Christmas Day, Grudge Match stars veterans DeNiro and Stallone as two former lightweight champions in their 60s who come out of retirement to fight each other. Although we all know Stallone from the never-ending Rocky series, this is the first time since 1980's Raging Bull that DeNiro "laced on the gloves for the big screen." Basically, it's the stars of the two greatest boxing films ever facing off. Bromance central.

For five seasons, they have captivated audiences around the world with intrigue, dark humor, and sentences punctuated with "bitch."

When the show finally ended (spoiler alert), it was sad to see the characters separated forever. Yet no other ending could have done justice to the legacies of Walter White and Jesse Pinkman, who will go down as one of the greatest TV duos of all time.

Now, we just have to cross our fingers and hope that, someday, they too could host SNL.