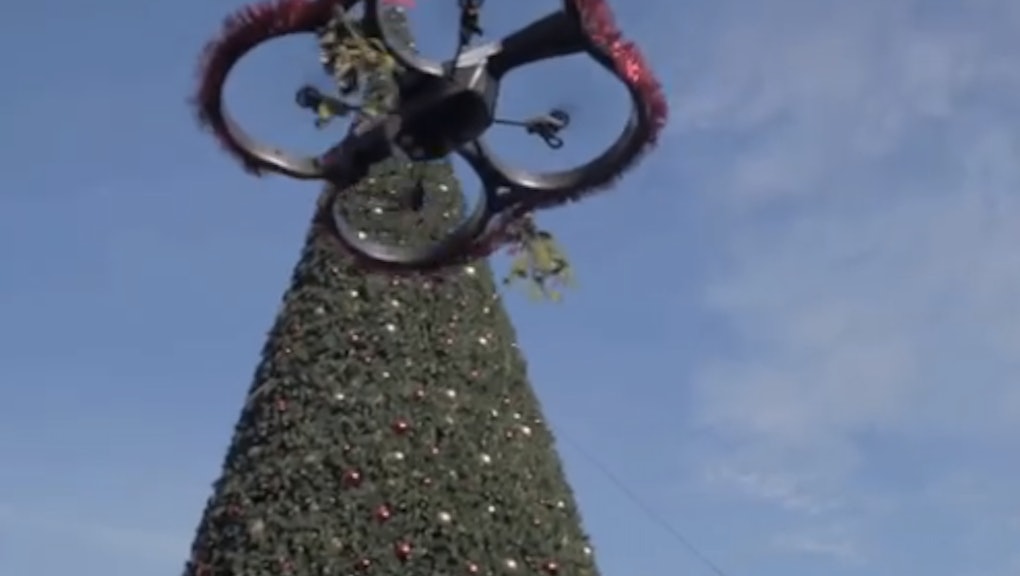 This might be one of the most unique Christmas videos we've seen this year. Artists George Zisiadis and Mustafa Khan decked a mini "drone" with glittering garlands and sprigs of mistletoe, before flying it over the heads of unsuspecting passerby in San Francisco's Union Square. Couples (or would-be couples) — both young and old, gay and straight — adorably obliged the drone's demands. Some even signaled for it to fly their way.

Zisiadis' imaginative and subversive works seek to alter people's relationships to their environments for the better, and are a nice shift from the popular tone of technological paranoia. Zisiadis told PolicyMic, "My work is about playfully re-imagining the world around us. Drones have been causing all sorts of paranoia lately and I wanted to reframe them from being something scary and ominous to be being fun and human. Its not about the technology, its about how we use it." It's certainly one way to get people into the holiday spirit.

Zisiadis' past projects include the world's first interactive balloon immersion, a bubbleverse, and cards placed on public transit that encourage people sitting next to each other to strike up a conversation. More whimsical ideas for city transformation can be found in his book Urban Imagination, out now.