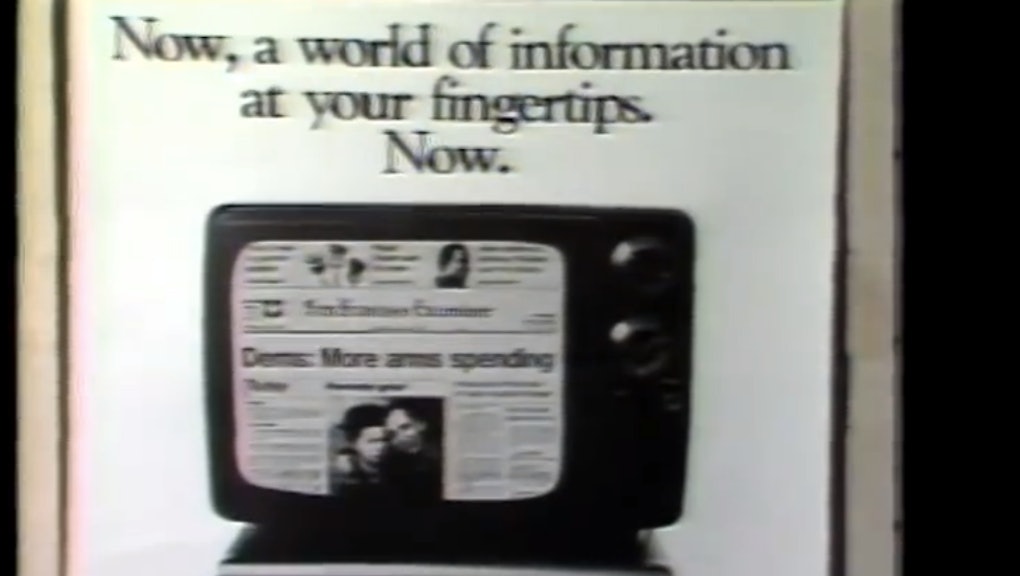 Watch This Hilarious 1981 News Segment About the Internet

Imagine, if you will, sitting down to a 1981 television news report about the potential of personal computers to deliver news directly into people’s homes. Actually, don’t imagine it. Here it is:

Then San Francisco KRON science editor Steve Newman couldn’t have known how prescient his report would be. It covers an early experiment in electronic news by service provider Compuserve and 11 American papers, including the New York Times, the Washington Post, the Los Angeles Times, and the San Francisco Chronicle.

Thanks to the initiative, over a decade before the advent of the web, users were able to download the news by placing their Bell telephone handset on delightfully antiquated acoustic couplers and dialing in to Ohio-based servers from the comfort of their homes.

(Even more anachronistic? The fact that before they could do so, they had to cut a coupon out of their daily paper and mail it in. How adorable is that?)

It’s hard, watching the video, to remember the cutting-edge nature of the ancient-looking devices pictured. For some context, the first genuine personal computer didn’t arrive on the market until that year, and according to the video, there were only 2,000 to 3,000 personal computer users in the San Francisco Bay Area in 1981.

It’s also hard to recognize the ominous subtext of the perky report, which includes an editor consoling himself about the direction his paper is headed in (“We’re not in it to make money. We’re, uh, probably, uh, not going to lose a lot, but we're not going to make much either”), and a user who’s particularly excited about the ability to copy newspapers’ content, which he accurately describes as “the future.”

And so, rather than simply chronicling an exciting new form of distribution, Newman accidentally ran an early report about the death of print. He ends by discussing when a newspaper salesman can expect to lose his job. Unfortunately, Newman’s cheerful answer — “For the moment at least, this fellow isn’t worried about being out of a job!” — could as easily have been, “I guess he will sooner or later!” or the consoling, “Well, he can always get an internship!”

As can we all.