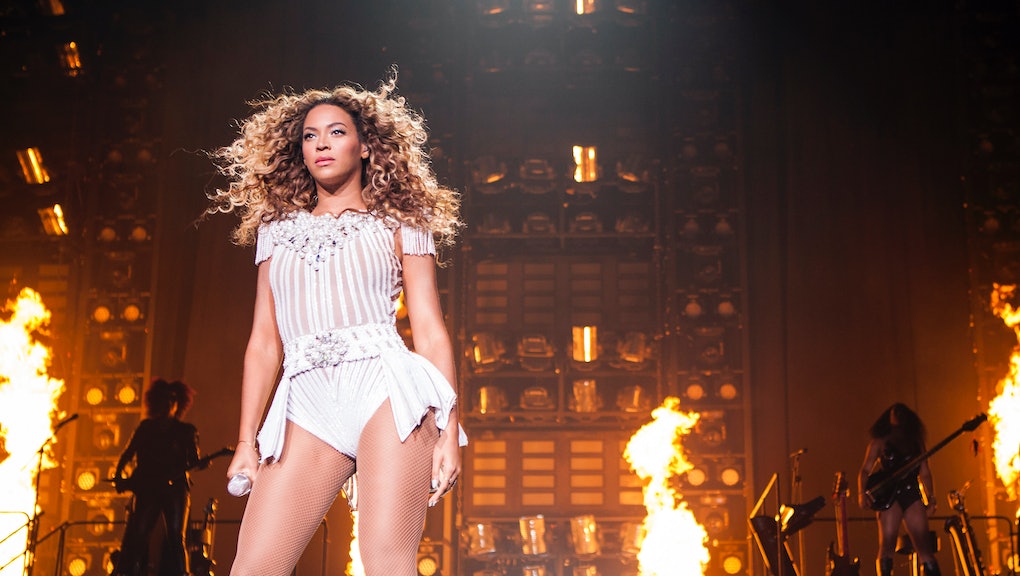 13 Times Celebrities Changed the World in 2013

Celebrities in 2013 gifted us many things we wish we could return, like Kanye's "Bound 2" and Miley's pictures of her tongue. But it was also a great year for celebrities speaking their minds on political and social issues, and championing causes like gender, racial, and sexual equality. Here are the top moments of 2013 when celebs used their fame to make a difference.

Most women at the top of the pop world are hesitant to drop the F bomb — feminism — but Queen Bey owned it in a May cover story in British Vogue. She said, "I guess I am a modern-day feminist. I do believe in equality." Though her words have sparked much debate, her new self-titled album released this month solidified her comfort with the word. Beyoncé features 14 songs and 17 videos that combine female sexuality with a message of empowerment. One track even samples the TEDx talk "We should all be feminists" from Nigerian author Chimamanda Ngozi Adichie.

2. Laverne Cox paves the way for transgender people and women of color in media

The July release of the Netflix series Orange is the New Black introduced viewers to the breakthrough role of transgender prison inmate Sophia Burset, played by transgender actress and advocate Laverne Cox. In August Cox told NPR, "The industry historically doesn't think that we [trans people, women, black actors] are marketable, or they want to cast us in very limited ways. But I think that the wonderful lessons that Orange Is the New Black is teaching us is that it shows our industry — the entertainment industry — that you can cast women of different races, you can cast different ages and body types, and folks will tune in and be interested. And the public is craving that."

More than 50 celebrities and public figures, including Amy Poehler, Ice-T, Courtney Cox, and Blair Underwood, teamed up for the NO MORE PSA Campaign, a three-year print, broadcast, online, and outdoor campaign that rolled out in September. Led by the Joyful Heart Foundation and directed by actress and advocate Mariska Hargitay, NO MORE calls for bystanders to speak out and break the silence around issues of domestic violence and sexual assault.

The British comedian is getting serious on us. In a June interview Brand called out MSNBC journalists for their unprofessionalism, in September he was kicked out of the GQ Awards for making a joke about Hugo Boss' ties to Nazism, and most recently he became a guest contributor for the New Statesman in October to discuss his take on the current state of politics. "Profit is the most profane word we have. In its pursuit we have forgotten that while individual interests are being met, we as a whole are being annihilated," Brand writes.

In an interview with BBC Newsnight, he further presented his idea to create "a socialist egalitarian system based on the massive redistribution of wealth, heavy taxation of corporations and massive responsibilities for energy companies exploiting the environment."

5. Lady Gaga critiques the use of Photoshop

The pop icon expressed her distaste for the photoshopping of her image on the December Glamour cover at the magazine's 2013 Women of the Year Awards in November. She urged Glamour and similar publications to change the way they alter images, which she believes has damaging effects on readers. She also encouraged young people to "fight back against the forces that make them feel like they're not beautiful."

6. Iman and Naomi Campbell demand diversity on the catwalk

Supermodels Naomi Campbell and Iman together with model-turned-activist Bethann Hardison formed the Diversity Coalition, an advocacy group that calls out high-profile designers for the lack of women of color in their runway shows. In September, the three penned an open letter to the governing bodies of Fashion Weeks in New York, London, Milan, and Paris. They named top designers and brands guilty of this exclusion and demanded change: "Eyes are on an industry that season after season watches fashion design houses consistently use of one or no models of color. No matter the intention, the result is racism."

7. Wentworth Miller comes out for a cause

In August, the actor responded to an invitation to the Saint Petersburg International Film Festival, stating, "As a gay man, I must decline." He cited that he is "deeply troubled" by Russia's anti-LGBT laws. He has since openly discussed his personal struggles with his sexual identity.

8. Lorde isn't afraid to call herself a feminist

The 17-year-old New Zealand sensation has referred to herself as a feminist multiple times, from a July interview with the Huffington Post to her controversial Selena Gomez insult in Rolling Stone in September. She also hasn't shied away from expressing her views on feminism— most recently calling herself "hugely sex-positive" to V Magazine.

9. Patrick Stewart speaks out against violence toward women

At Comicpalooza in May, the actor gave an emotional reply to a question about his work against domestic violence. He discussed his abusive father and his reasons for partaking in activism: "I do what I do in my mother's name because I couldn't help her then. Now I can."

A new campaign to fight against intolerance of the LGBT community, "#Mundpropaganda – Gentlemen Against Homophobia," will run in the January German GQ. It will feature 13 straight male German celebrities kissing. "Straight men kissing — that courage is totally admirable, especially for people who are in the public spotlight. The people who turned us down when we were looking for supporters for the initiative are proof that even in Germany, we still have a long way to go," says German GQ Editor-in-Chief José Redondo-Vega.

11. Athletes come out publicly and open dialogue about sexual orientation in sports

Los Angeles Galaxy soccer player Robbie Rogers and former Washington Wizards basketball player Jason Collins came out early this year, making them the first active openly gay male athletes in U.S. professional athletics. In October, WWE wrestler Darren Young told TMZ that he is gay, and Olympic diver Tom Daley announced on YouTube this month that he is bisexual. These statements have paved the way for more discussion around sexual discrimination in sports.

No stranger to activism, the Elysium actor and co-founder of nonprofit Water.org spoke about privilege, wealth, education, and Obama administration policies in an August interview with the Guardian. He also received attention last month for a video that made the internet rounds of him reading from Howard Zinn's 1970 speech "The Problem is Civil Obedience" at the 2012 event "The People Speak, Live!"

The unassuming, Oscar-winning actress has solidified herself as every woman in America's fantasy BFF with her goofiness and charm. But more important, she has been continuously outspoken about eating normally: J-Law refuses to diet or starve herself, loves to eat, doesn't like to work out, and has criticized the media for its unrealistic standards for women.