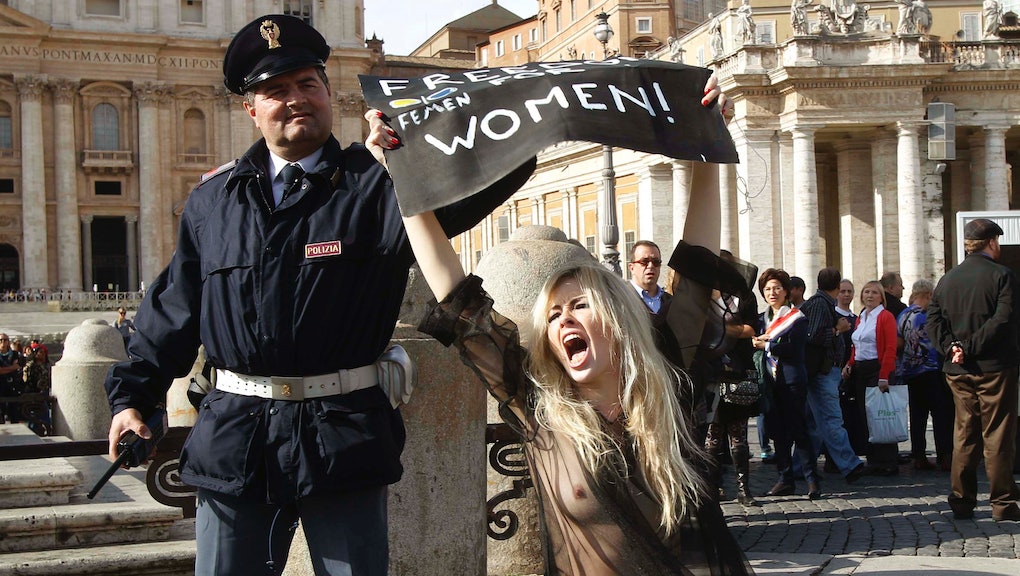 Femen's Protest in Bethlehem Shows Just How Clueless They Are

It's Christmas Eve, and Bethlehem is getting ready for the biggest night of the year. A 50 foot tree stands sparkling over Manger Square, souvenir shops creak with religious trinkets, and pilgrims buzzed with sacred significance swarm about the ancient Church of the Nativity, where Christ was supposedly born.

This year, however, the little town is anticipating a less traditional Christmas gift — one that always comes unwrapped. If rumors are to be believed, the "rebellious naked breasts of Femen" are to be presented to the people and pilgrims of Bethlehem on Christmas Eve, in a token exhibitionist protest at the Church of Nativity.

Exactly what the activists will be taking a stand against is unclear: sources say the target won't be announced until the night itself. But if Femen's most recent action at the Vatican is anything to go by, their demands might be that the world quit "middle age [sic] religious ideas." This is a group that can hardly be accused of a lack of ambition.

Among locals, reactions to the possibility of a naked Christmas surprise range from fury to enthusiasm, with a widespread sense of bewilderment in between. Many of the women I spoke to hadn't heard of Femen, but didn't think a nude protest sounded quite appropriate for a religious occasion. Others were primarily concerned for their well-being, as public nudity in Bethlehem is likely to be met with arrest.

"It sounds like they might scare off the pilgrims," Bethlehem shopkeeper Ahmed Vardi told Buzzfeed. "We rely on them for business." Some twenty-somethings, on the other hand, were reconsidering their Christmas plans on hearing the news.

Faced with such a monumental disruption to festivities, Bethlehem's authorities were less generous. "Any protest that does not observe Palestinian customs and traditions and which violates public decency is unwelcome," said Vera Baboun, the town's female mayor, in a statement.

None of this is likely to deter Femen. The group, after all, does much more than just disregard local norms. Having concluded that certain religious ideas and cultural sensibilities are misogynistic and oppressive, they view things others hold sacred as targets for destruction. What women who have spent decades living, analyzing, and challenging these norms and values think about that is deemed irrelevant.

It's a bulldozer approach that isn't making Femen many friends. This year, the group's Topless Jihad Day — organized in support of Tunisian member Amina Tyler and featuring activists appearing outside European mosques with "fuck your morals" painted on their breasts — was met with a furious backlash. 'Muslim Women against Femen' launched a campaign against the group, who they say slap the Arab world with damaging and ill-informed labels of backwardness and barbarity. "We are taking a stand to make our voices heard and reclaim our agency," the group states. "We have had enough of Western feminists imposing their values on us."

Unfortunately, Femen did not show much sensitivity to this critical analysis from women with a different perspective from their own. "They write on their posters that they don't need liberation but in their eyes it's written "'help me,'" leader Inna Shevchenko wrote in an open letter, apparently with no awareness of the colonialist overtones of her response.

Although it might not target Islam, the Bethlehem protest comes with the same problems. When a western activist group surprises an Arab Christian and Muslim community with an unexpected, barely explained gift of "liberation," they become white saviors importing a very particular brand of freedom — one which, in Femen's eyes, is the only kind that deserves a hearing. "We respect our naked war against oppression," Shevchenko told Metro. "If there are cultures that are not able to coexist with that idea, [that] means those cultures are anti-humanist and don't deserve respect from us."

Happily welcoming a party of daubed naked breasts at your religious festival, however, is a rather demanding requirement for respect. And by taking such a brash and uncompromising stance, Femen threaten to exclude the very Palestinian communities they are protesting about, and in.

They would benefit from paying attention. Palestinians activists have struggled for generations against the intersecting challenges of patriarchal culture and Israel's military occupation. They are building institutions in which women can support each other, confronting social stereotypes, and critically challenging the Israeli occupation and its crippling impact on rights and freedoms. No one knows the difficulties and strategies of this fight better than Palestinian women themselves.

By stripping off and spoiling Christmas, however, Femen imply that they know best. Their brash, uncompromising tactics may make headlines. But it disregards the complicated global realities of women, silencing the diverse feminist struggles and challenges in Palestine and elsewhere with a simplistic one-size-fits-all agenda. At best, this becomes irrelevant and gimmicky. At worst, it looks more like imperialism and bigotry. Femen have shown that they can shout, but this Christmas they would do much better to listen.