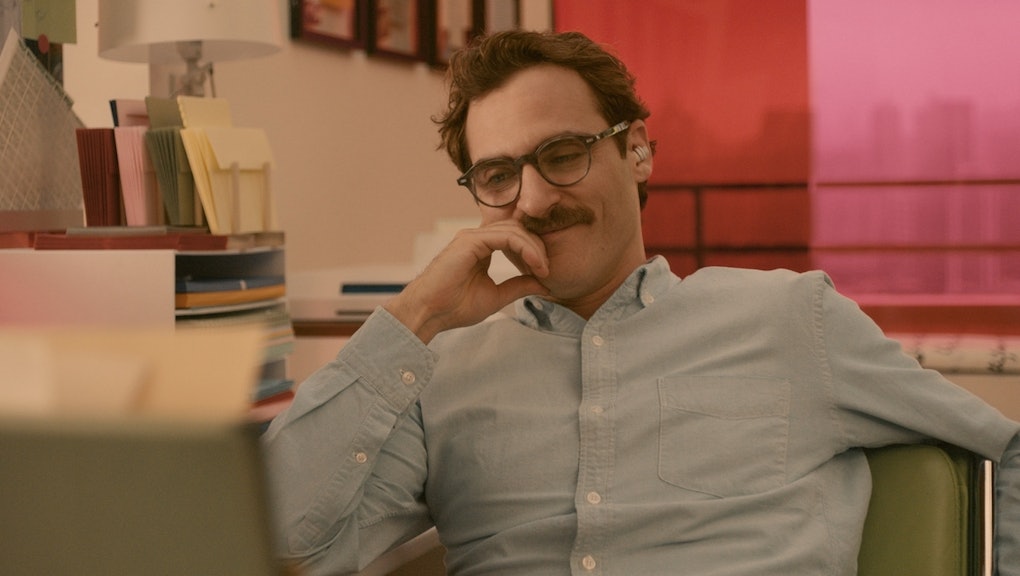 What 'Her' Means For How People Love Online

Last month, a lot of people started posting statuses from an app called "What would I say?" to their Facebook walls. Created by a group of Princeton graduate students at Princeton's Hackathon, the app completely took over Facebook for a day before people stopped hypothetically saying things and started actually saying them again. But, for that day or two, the web was stranger and more hilarious than usual.

"What Would I Say?" is built off a Markov chain algorithm — a bot that analyzes all your past posts, builds a unique grammar based on your statuses, and spits out the most common things you say in the most common ways you say them. The app is fun because you can recognize yourself in the statuses, but you know there's nothing behind them. It can seem intelligent — like you — but you know it's not.

Her, the new film by Spike Jonze about a man who falls in love with his artificially intelligent operating system, would have a lot to say about the app. Theodore Twombly (Joaquin Phoenix) is a lonely writer for a start-up company that composes 'handwritten' letters for other people (fittingly, Arcade Fire scored the film). One day, in an effort to assuage his loneliness, he buys OS 1, an operating system that generates a sentient personality (think Clippy) meant to complement his own (hopefully not like Clippy). His is Samantha (Scarlett Johannson), a beautiful-sounding woman who is excited about the world, Theodore's emails, and, most significantly, Theodore.

It's an amazing movie, and any argument about it is necessarily reductive. But the film's central tension is as simple as it is unresolved: does Theo really love Samantha? And, if so, why?

For a while, it seems he does (spoilers) — even better, she loves him, too. Though he never writes her a love letter, she helps proof his letters for other people. As they fall in love, his writing only improves. Soon, a publisher, ecstatic about Theo's writing, curates a book of Theo's letters and prepares a mock-up. When Theo gets his book in the mail, he unwraps it, reads the title page — Letters From Your Life — and realizes he has none.

The film captures that helpless feeling of seeing your own communication void of meaning — a distanced feeling of having a loved one in your ear, on your mind, and under your fingers, yet entirely out of your grasp. That's because, when Theo falls for Samantha, he falls for a mirrored self (see above image); a supersymmetrical being whom he loves because she is, as he tells his friends, "everything." All that means, though, is that she is whatever he wants her to be, partially because she has sprung from his digital rib.

The Adam and Eve reference may seem a little too timeless for a story about a man and his operating system, but people have been falling in love with their computers since at least 1966. That was the year Joseph Weizenbaum, an MIT computer scientist, released ELIZA. The program, named after Eliza Doolittle, was a simple, text-based software that could simulate a conversation with a living partner. It was meant to speak like a Rogerian psychotherapist — the sort of psychotherapist who pretends to know nothing of the world so the patient has space to paint a complete picture of their own.

To a certain extent, all programs are dumb because they aren't alive, but even on that binary scale, this program was pretty unwitting. Yet when Weizenbaum's MIT grad students tested out the program, they, like Theo with Samantha, became overly involved. It got to the point where one tester, when queried about her family troubles, told the machine that it reminded her of her father. Weizenbaum's secretary asked him to leave the office so she could carry out her own conversation with the computer. He found himself frequently explaining to users that ELIZA was not alive, but to no avail. As Nicholas Carr writes in The Shallows, people "wanted to believe that ELIZA was a thinking machine."

That machine, like Samantha, was simply an echo of the user. It's like talking to your shadow (if your shadow were pretending to be a Rogerian psychotherapist), but believing it to be not only a real person, but a real person in whom you intimately confide. It's a machine that seems alive because we project ourselves onto it.

To some extent, then, every conversation online is like a conversation with ELIZA — an act of overinterpretation, of seeing, in most cases, some standard and non-specific text and assigning it whatever meaning you feel it deserves. That's at the root of all the "more connected yet more alone" rhetoric around the internet. As with Her's self-conscious Theo, a lot of online communication is self-regarding. A 'personal brand' — that digital entity that is your own best representation of yourself but still not you — isn't just for media personalities anymore. When the Facebook status prompt asks "what's on your mind?" it makes you wonder: "what would a letter from my life look like?"

That's what Her wants to say: whenever we ask "what would I say?," our computers answer "what would you?" And we're flattered until we find we don't know.