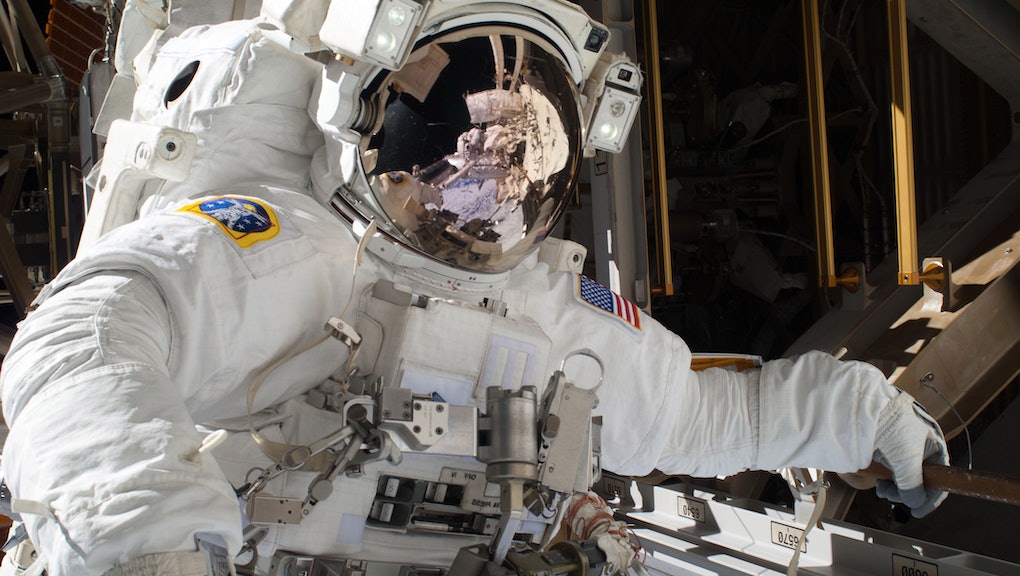 NASA Shows What Christmas Eve Looks Like From Outer Space

Santa isn't the only celestial traveler speeding through the skies this Christmas Eve. A Tuesday jaunt into space by International Space Station (ISS) astronauts Rick Mastracchio and Michael Hopkins to finalize repairs to a critical cooling system has become the second Christmas Eve spacewalk in history.

A cooling loop on the ISS had failed on Dec. 11, forcing NASA to order all nonessential equipment turned off and halting many critical science experiments. Repairs had to be conducted in stages. On Saturday, the two astronauts successfully removed an ammonium pump with a malfunctioning valve in just five hours and 28 minutes, far short of the predicted six and a half hours. NASA is mystified as to why the pump, which had been installed on a previous spacewalk just three years ago, failed again.

It was Mastracchio's seventh spacewalk and Hopkins' first. Both of the astronauts wore extra safety gear including snorkels and water-absorbent padding in their helmets in case of a malfunction - such as an incident last year in which an Italian astronaut nearly drowned after his suit flooded with water.

NASA wanted to continue the repairs, but Mastracchio said he was feeling uncomfortable in his space suit. "I'd like to stow this old module and kind of clean up and call it a day," he said. During the return, his suit was compromised when a water switch in the air lock was improperly activated. NASA pushed back the second stage of the repair to Christmas Eve.

According to Dr. Patrick Fuller, the situation with the coolant system was serious:

But fortunately, the repair was finalized on Tuesday, with the insertion of a new 354-kilogram pump 260 miles above the surface of the planet. Now hopefully the astronauts can lay back and relax during Christmas day.