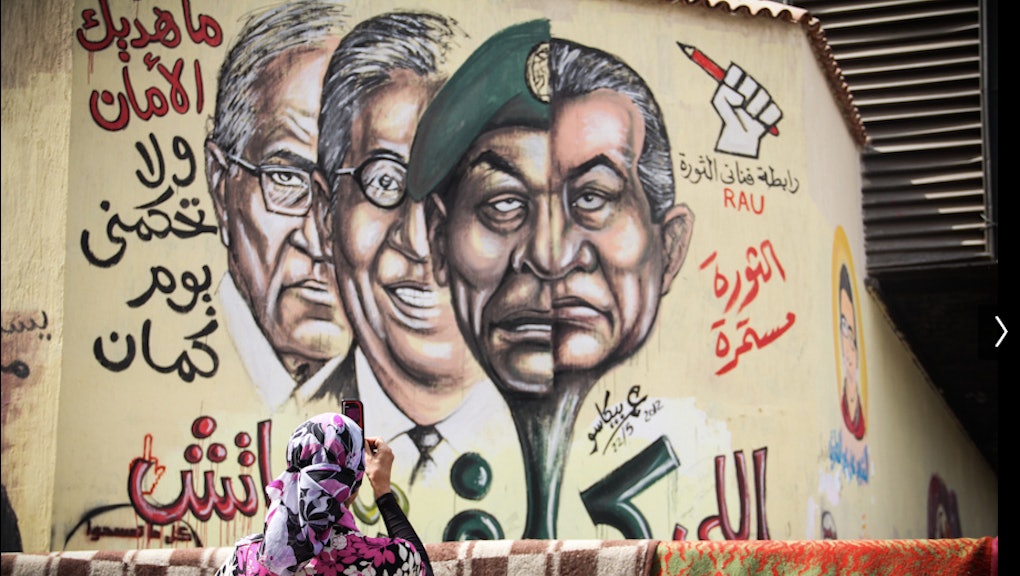 5 Incredible Art Movements That Exploded After the Arab Spring

Back in 2011, the Arab world was rocked by protests and upheaval. Unrest in the region is hardly past-tense, and the countries that saw the fall of long-time dictators are still facing their respective political challenges. Still, after the fall of leaders like Gaddafi in Libya or Mubarak in Egypt, the region has seen a real explosion of creative talent and energy.

Here are 5 examples of art scenes that have taken off during the past three years in the Middle East and North Africa:

Although Tunisian rap has been on the rise for the last decade, it recently gained levels of popularity and boldness that would have been impossible under the rule of deposed president Ben Ali. Before President Ali was ousted in 2011, rappers were limited to rapping about social injustice and unemployment without ever directly referencing the dictator's regime. However, following his departure, the atmosphere has opened up greatly, leading to a creative surge in lyrical content.

"With the dynamics since Tunisia's uprising in 2011, people are willing to speak out," says a DJ of a prominent pirate radio station. "We're an outlet for people who can't express themselves on traditional platforms." Some rappers have even become so bold as to call government officials "bastards" and "vampires"

However, complete freedom of speech still has a long way to go in Tunisia. One of Tunisia's most famous rappers, Weld El 15, gained national support after he was arrested for "violating public morals" with his song "Cops are Dogs." Although Weld El 15 managed to get his sentence reduced, he encountered troubles again with his freedom of speech after he was arrested at his own concert for insulting the police.

Thus, for the immediate future, it appears Tunisian rap will remain quite controversial, while also quite popular, providing listeners with the most honest view of a street mentality that has so long been suppressed.

Libyan poetry has had a long history . Influenced by Egyptian literature and Libya's own rally for independence in 1951, Libyan writers saw a golden age of writing in the 1960s, which was tragically cut short when dictator Muammar Gadaffi came to power in 1969. Writers such as Omar al-Kikli began their careers with high hopes of continuing Libya's literary golden age, only to be imprisoned for up to a decade under accusations of "plotting to topple the Gadaffi regime."

As a consequence of their oppression, many Libyan writers were at the forefront of the Libyan revolution when it began in February 2011. With Gadaffi successfully deposed, Libyan writers can now relish their freedom after decades of censorship. Writers like Mohamed Mesrati, Azza al-Maghour, and Najwa Ben-Shatwan have all come out with new publications, attempting to redefine the Libyan national identity while also exposing the atrocities of the Gaddafi regime.

Attempts like Khaled Mattawa's "After 42 years" provide a first-time glimpse for many outsiders, with revealing stanzas such as: "How many killed by his men over the decades / The cracked skulls, the mass graves, the uncounted dead?"

Although its people did not actually remove a ruler, Morocco still witnessed protests that addressed many of the same issues as their Arab Spring neighbors, namely corruption, a lack of civil rights, and economic inequality. And Morrocans responded with a boom in experimental theater, arguably the most direct form of social dialogue.

Theater has been popular in Morocco since the Arab Spring, with one writer noting, "theater thrives on conflict." The subject matter has appropriately shifted to relevancy, with the "Moroccan ‘Théâtre et Cultures" this year held around the themes of tolerance, freedom of expression and women's rights.

Dabateatr, a theater in Morocco which has gained popularity through an experimental type of theater known as "L’khbar fi masrah," which means"the news through theater". The actors interact with the audience and address issues such as sexuality, corruption, or the elections.Using humor and theatrical antics to ease the tension, heavy subject matter is discussed without causing serious conflict. Professor Aomar Boum believes this is largely positive, as "the frustration of the youth is released through the process of the 'festivalisation' of dissent.'"

Ultimately, after decades of limiting opinion, it seems open discussion could be very productive for this country as it addresses issues of modernization.

Music has played an integral part in uniting protesters of the Arab spring, and none one of the most vibrant music scenes of the Arab spring can be found in Yemen. Music has been such an integral part of the Yemeni revolution that noted poet, Duhaq al-Dhabyani, believes "music helped set off the revolution. When we first tried to protest, we were still very scared. It is as if the song broke a wall of fear".

Indeed, while protests in Yemen were some of the bloodiest of Arab spring, it did not deter protesters from flocking in mass to "Change Square" to dance and sing in the name of revolution. Artist Mohammed Aladharaa, landed on a political anthem with his song "Twenty Million of Us", which he can be found performing at protests that resemble concerts. His music, which is catchy and inspiring, is all in the promotion of peaceful sit-ins.

The other popular protest songs include "The Color of my Blood Scares Them" a poem written by the poet Mohammad Al Qadi, and sung by three different Yemeni citizens. With powerful lyrics such as, "The unjust are on emerald thrones/

Most inspiring about this music, is that all of it is done for the benefit of the people, even though the cost usually comes down to the individual. The perseverance is well encapsulated by singer Khaled Al-Zaher ""There's no financial profit in the revolution. You do it out of personal conviction. It's our jihad..We pass the message of revolution in our songs."

MWhen it comes to art of the Arab Spring, there is nothing that quite compares to the graffiti scene that exploded overnight in Egypt. Beginning with anti-Mubarak protests, the Egyptian graffiti scene grew so big that it has become the subject of several books (including a 680-page picture book chronicling the ephemeral art pieces), inspired the creation of several art galleries, and launched the careers of now-famous taggers such as Ganzeer, El Teneen, Shank, Aya Tarek, and Sad Panda.

Egyptian street art is fascinating not only because of the active role it played in raising protestors' morale, but also because of the enormity of its production.  Graffiti can be found everywhere in Cairo, from universities, to bridges, to bombed-out walls. Events such as "Mad Graffiti Weekends" led to collaborative efforts by many graffiti artists to create large mural masterpieces, such as the portrait of Islam Rafaar in Falaky Square.

The quality of Egypt's prominent street artists is nothing to be scoffed at either. Ganzeer, considered to be the "major player" of Egypt's street art scene, has spoken and presented work in Poland, Brazil, Switzerland, and Italy, and hosted a solo gallery, "The Virus is Spreading", in Cairo's own Safar Khan. His most famous work, "Mask of Freedom," not only became an iconic image at Tahrir Square protests, but became so popular that imitations of it were found as far away as the Polish mining region of Katowice.

But most amazingly, Egyptian street art was able to help the people reclaim the streets, with epithets of reform and freedom so brazenly plastered that they could not be eliminated by the powers at be. As Ganzeer reminds us, "People forget that the streets belong to the people. They think that they're some kind of official government-controlled entity. I think it's important to remind people that they're not." Graffiti was more than an art for Egypt: it was war paint.