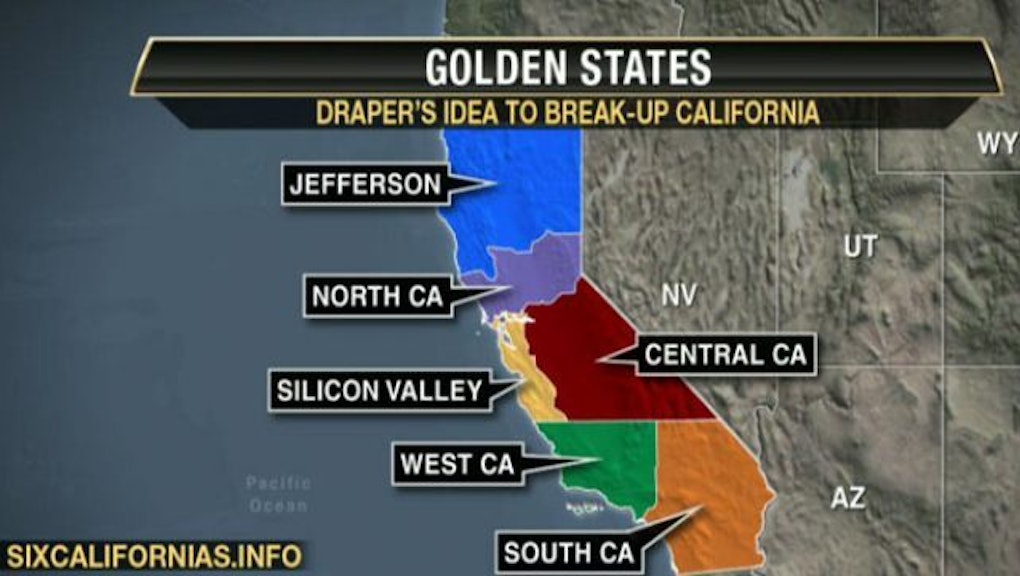 Tech investor Tim Draper wants to see California split six ways. His plan would dissolve California into six separate states by cutting along existing county lines and, of course, Silicon Valley would be one of the new states born out of the deal.

Draper isn't the first Silicon Valley type to suggest that small is beautiful. Peter Thiel is a major supporter of the Seasteading Institute, an organization that researches the possibility of small, politically autonomous communities at sea. Entrepreneur and Stanford lecturer Balaji Srinivasan related similar ideas at a recent talk hosted by Y-Combinator. Google CEO Larry Page has also made comments supporting the same basic set of ideas.

The immediate reactions to Draper's proposal – much the same as the reactions to Page, Srinivasan, and Thiel – have been less than positive. The general criticism is that it's a scheme to carve out a low-tax enclave for the rich, or some kind of play at creating a techno-Libertarian utopia. References to Galt's Gulch and Rapture abound.

But the Silicon Valley tech crowd isn't the only group of Californians ready to ditch Sacramento. California's rural North has had an on-again, off-again love affair with statehood since at least 1941. The big complaint is that the less densely populated Northern counties will never have representation on par with urban power centers like San Francisco or Los Angeles. Instead of dealing with a state government that can't properly represent them and doesn't understand their particular needs, many rural communities in the North would prefer to band together and look after themselves.

Both urban techies and rural Northerners tend to endure ridicule when they open their mouths about splitting up the state, but the idea makes a lot of sense.

Smaller jurisdictions means the ability to better tailor policy to local concerns. The more centralized policymaking becomes, the more one-size-fits-all prescriptions get handed down which may or may not meet the needs of diverse constituents.

Centralization also slows down innovation. One of the major strengths of the U.S. is its system of federalism. To the extent that the states have leeway trying new policy approaches, they are all able to learn from each other's experiences. For example, initiatives and referendum were pioneered in Oregon at the turn of the last century and were later adopted by many other states. Oregon made the initial investment in trying a new policy and other states benefited from Oregon's example. More people trying more things means we can get around the learning curve faster as a whole.

There's one other advantage to smaller states: It's easier to leave them. Democracy is as imperfect as anything else in this world. No matter what reforms are passed, bad people can still get into office, policy mistakes can still be made, and individuals can still find themselves in honest disagreement with the majority of their fellow citizens. Making it easier to get up and leave gives individual voters recourse if government becomes too dysfunctional or unresponsive. It also allows people to join communities that better fit their political tastes. Being able to opt in and opt out is important for smoothing out some of democracy's rougher edges.

Switzerland, a country that receives top marks from watchdog organization Freedom House, provides a real world example of what decentralized federalism could look like. The nation is about one-tenth the size of California, but is divided into 26 states or Cantons. The largest Swiss Canton is only slightly bigger than the City of San Francisco; the smallest is less than 10 square miles. When governance can benefit from economies of scale, the Cantons work together horizontally to provide services or set uniform policy. When there's little-to-no payoff, they retain the power to set local policy for local priorities.

Decentralization doesn't mean isolation, it means that communities are free to work together, side-by-side in whatever way and to whatever extent is most effective for them.

Putting the longer-term benefits of Draper's plan aside, there would be some serious short-run costs to consider. Economically, the transition period would not be cheap. Each new state would need to take over responsibility for services currently administered from Sacramento. Responsibility for things like roads and other infrastructure would have to be apportioned and existing, state-owned properties divided up. The process would be complicated and time consuming, but not impossible.

The real fly in the ointment is political, not practical. According to the law, splitting up California would require both the state and national legislatures to agree. One could imagine either party killing the measure if it posed any kind of threat. And let's be honest, introducing 10 new senators into Congress is bound to threaten someone.

Draper has a long way to go if he's serious about making this proposal a reality; at this point, he's still trying to get his initiative onto the upcoming ballot. But venture capitalists specialize in long-shot ideas, so maybe we shouldn't count him out yet. And who knows, perhaps come the November elections, the debate over the size of California's government will have taken on a different meaning entirely.