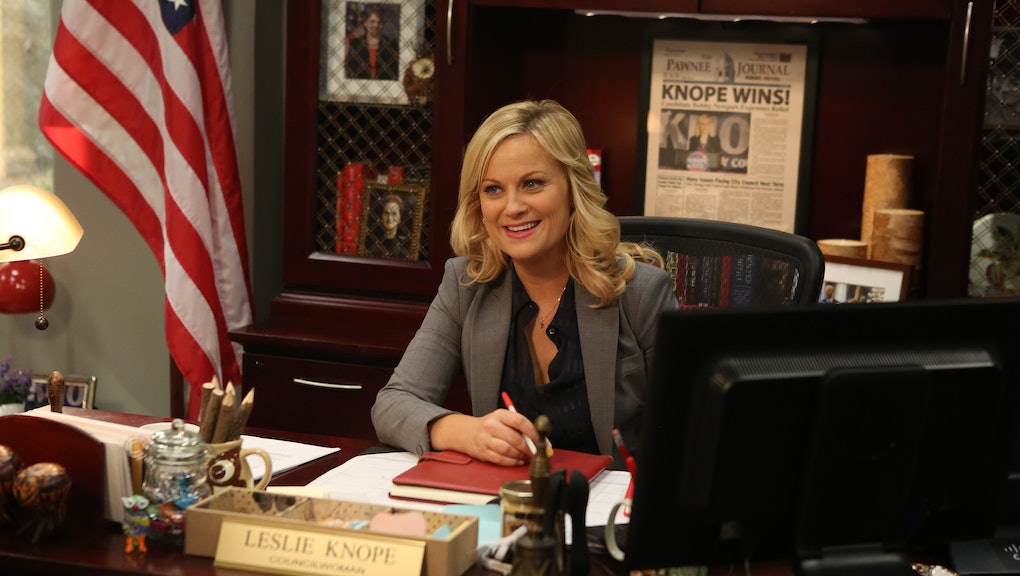 Amy Poehler's being awesome is not new, and it's not exclusively a trend of 2013 — but there's no doubt that she's been on top this year. From awards shows, to charity fundraisers, to her role on Parks and Recreation, she showed she could make us laugh, cry, and cry from laughing until we just had nothing left.

Here are the greatest moments from a year of Amy.

1. That time she hosted the Golden Globes.

When Amy Poehler and her recurrent partner in comedy, Tina Fey, hosted the Golden Globes in January, they were more entertaining than all the films that won awards at the show.

2. Her inspiring messages on 'Smart Girls.'

On her web series Amy Poehler's Smart Girls, she opens up to fans with heartfelt and often difficult questions. In this episode, she talks about how she finds her courage to take lead roles and to take risks.

3. This 'Parks and Rec' Photoshoot.

Amy and the other actresses from Parks and Recreation imagined themselves in the world of Jane Austen in this hilarious photoshoot. "I would have been a scullery maid," says Amy.

4. When she got real with Jimmy Kimmel.

Emphasis on the part where Amy told Jimmy Kimmel he should get stoned at the Emmy's, because Amy is honest.

In this season of Parks and Rec, Amy's character, Leslie Knopes, meets her idol, Vice President Joe Biden. Apparently Amy leaned in for a kiss, but Mr. Biden turned her down (too bad for him).

6. That time she heckled Neil Patrick Harris at the Emmys.

The dynamic duo got together again to present at the Emmy Awards and stole the show from host Neil Patrick Harris when they catcalled him from the audience and demanded that he twerk for them.

While giving a speech about the Worldwide Orphans Foundation, she cried — and made everyone else cry — when talking about what life is like for orphans.

8. When she brought Christmas cheer to New York.

Decked out in a Christmas getup, Amy ran around the streets of New York ordering people to sing Christmas Carols — and to sing them correctly, dammit.

Forget Santa — this season, it was all Amy. Here's to another year of Poehler.