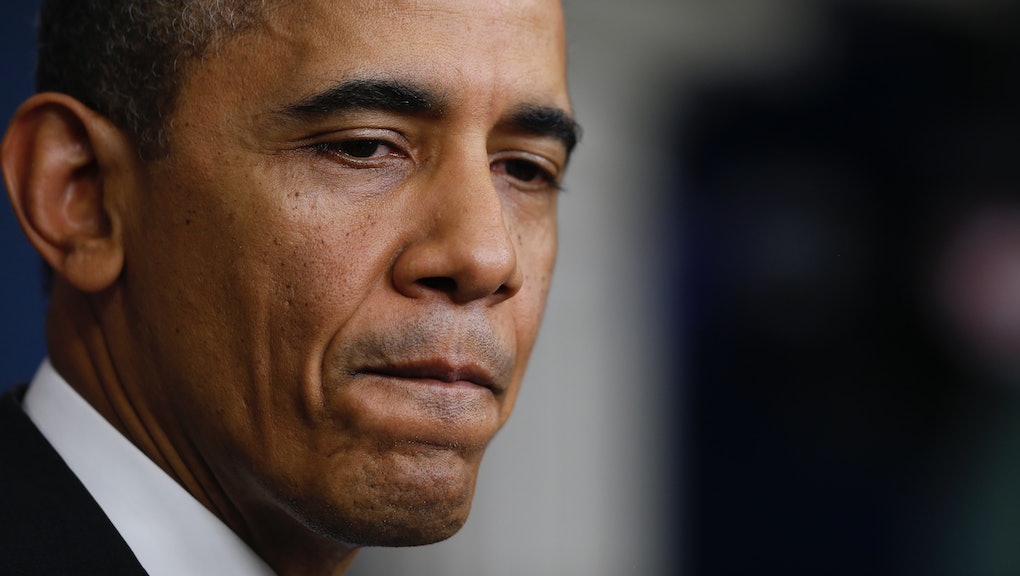 10 Photos Of Obama Looking Sad After a Horrible 2013

President Obama's fifth year job approval (40%) is now the lowest of any modern president besides Richard Nixon just before he left office. Which leaves us to ask, what's Obama's Watergate? While no single incident has defined Obama's presidency, he just can't seem to catch a break. Here's our list of Obama's 10 saddest moments of 2013.

With initial failings ranging from scrambled purchaser data and broken site calculators to long queues and frequent downtime, the $319 million spent on the project through October was a disaster. It doesn't help that the larger success of the Affordable Care Act was heavily reliant on initial ramping up of the insurer pool through the online marketplace.

Obama championed the ACA as one of the most important moves of his presidency. His remark (made 37 times and counting) of "if you like your doctor, you can keep him" has been relentlessly bashed for underplaying the way in which ACA fundamentally changes the health care industry. Coupled with Nancy Pelosi's infamous remark, paraphrased as "we have to pass the law to see what's in it," the sentiment that our president is trying to pull a fast one on the American people has stuck. As far as pulling down Obama's job approval, the healthcare.gov roll out ranks at the top of our list.

Part of Obama's drop in job approval is undoubtedly the anemic language of being "exasperated" with these "radical" GOPers. Surely Obama "wheeled and dealed" to reach a budget deal behind the scenes, but publicly he seemed a non-entity. By waiting 40 hours into the shutdown to invite Boehner and other top officials to sit down, then not entering a substantive discussion, the GOP was able to combat allegations that they hijacked the government with statements like "the president won't talk" and "he's shirking on his obligations."

Edward Snowden's revealing look into the breadth of NSA spying may or may not have directly incriminated Obama, but the fallout placed him front and center. When allied nations such as Germany discovered the NSA had monitored phone calls of Chancellor Angela Merkel, as well as monitored millions of phone calls in France, our allies looked to the president for a definitive response. Gone are the days when Obama could gather crowds of 200,000 in Berlin. In the words of Merkel "trust needs to be rebuilt." So much for repairing the U.S.'s image abroad.

4. Failed attempt at peace in the Middle East

"The Middle East is obviously an issue that has plagued the region for centuries." — Barack Obama, Tampa, Fla., Jan. 28, 2010

Two days into his first term in office President Obama appointed Senate Majority leader George Mitchell as his special envoy the Middle East, optimistically seeking "to actively and aggressively seek an active peace between Israel and the Palestinians." Five years later, tensions with Iran have risen and Israel has made close to zero policy changes regarding Palestinians, prompting Obama to Obama note, "It's a hard slog to work through all of these issues." At this point, the U.S. doesn't even appear in control of our own humanitarian efforts, with a floundering attempt to release 1,000 Palestinian prisoners and $700 million in U.S. aid to Palestine blocked.

With the portrayal of Obamacare and "big brother"-like NSA spying as big government, many people find it hard to believe that Obama didn't have a hand in the IRS's targeting of groups focused on "political action ... involved in limiting/expanding government, educating on the Constitution and Bill of Rights, social economic reform/movement." Whether it was the initial explanation that this was the work of low level staffers, the following response that it was a practice for dealing with the massive increase in non-profit applications leading up to elections or acting IRS commissioner Steven Miller's resignation — potentially suggesting internal direction on targeting conservative groups — many just just have a hard time believing Obama didn't have some hand in this.

Obama is in bad company again on this count. According to a report published by former Washington Post executive editor Leonard Downie, the Obama administration's "war on leaks" is the most aggressive since the Nixon administration. Downie, who also covered the Watergate scandal notes that "this is the most closed, control freak administration I've ever covered." The main component of this "war" is the Insider Threat Program, which utilizes the 1917 Espionage Act to hold anyone suspected of sharing classified information with reporters subject to lie detection tests and telephone and email surveillance.

Pulling the previous point into a single scandal, the Justice Department's secret collection of Assciated Press hone records is a serious threat to freedom of press and transparency. The records were retrieved through an obscenely broad application of the Espionage Act, subpoenaing incoming and outgoing phone records from 20 lines in four AP offices. Matt Apuzzo and Matt Goldman, both members of the AP's Pulitzer prize winning team were among the journalists monitored.

White House press secretary Jay Carney noted that "we are not involved in decisions made in connection with criminal investigations, as those matters are handled independently by the Justice Department." The finger was pointed back at the administration, however, when the Justice Department referred questions to the Attorney General Eric Holder.

While Obama did stick by his promise to wrap up Iraq's Operation Enduring Freedom, the last five years have been rough for troops in Afghanistan. In fact, the first six years of Afghan operations yielded roughly the same number of U.S. casualties as the first year Obama was Commander in Chief. From 2001 to 2008, the U.S. death toll was 630. Since 2009, the death toll is 1,617.

Despite open and candid support of a guilty verdict for George Zimmerman, Obama found his efforts futile.

10. Failure to live up to his own goals

Here's what Obama proposed in last February's State of the Union. How much of it actually got done?

1. Build on the guarantee in the Constitution that we will not be rivals for power, but partners in progress.

2. Reignite the true engine of the American economy, a thriving middle class.

6. Keep the people'’s government open, and pay our bills on time.

7. Make America a magnet for new jobs and manufacturing.

9. Do more to combat climate change.

11. Halve the energy wasted by homes and businesses over 20 years.

12. Improve infrastructure such as our 70,000 structurally deficient bridges.

14. Make high quality preschool available to every child in America.

20. Incentivize the hiring of retired soldiers and those out of the workforce for prolonged periods.