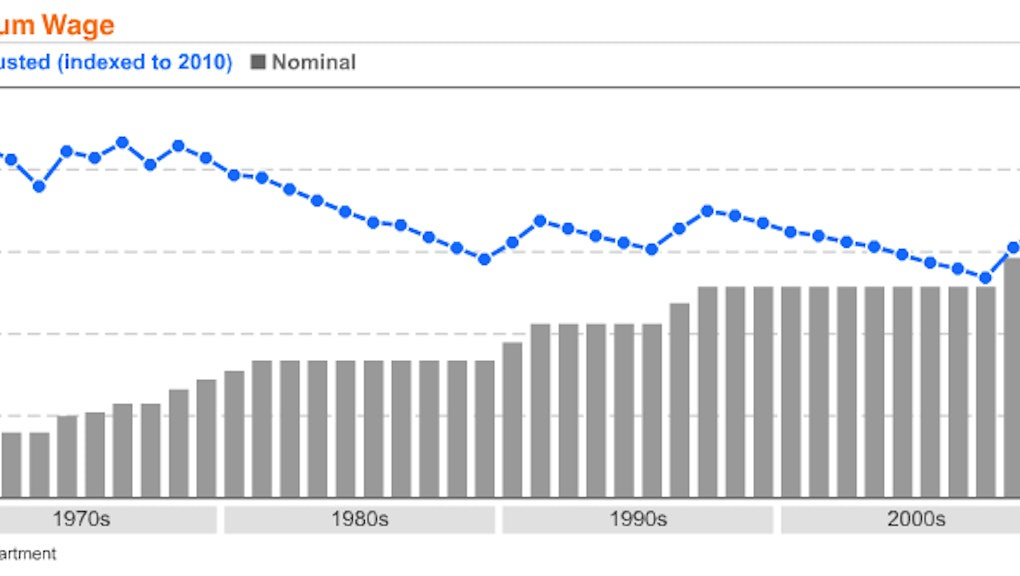 This Chart Explains Why the Minimum Wage Should Be Raised Immediately

Workers in 13 states will be receiving minimum wage increases in 2014, a move that coincides with a reignited interest in Congress to raise the federal minimum wage from $7.25 to $10.10 an hour. While conservative opposition mounts in Congress, a handful of local counties and municipalities have upped the ante by moving to raise their own minimum wages to match the local costs of living, which in certain cases means a minimum wage as high as $15.00 per hour. The effort to do something similar with the federal minimum wage centers on a provision in a bill cosponsored by Sen. Tom Harkin (D-Iowa) and Rep. George Miller (D-Calif.) which would tie the minimum wage to inflation.

Established in 1938 under the Fair Labor Standards Act (the same bill that imposed the 40-hour work week), the purpose of the minimum wage was to protect workers and guarantee a minimum of health and well-being for working Americans. The last time the federal minimum wage lived up to this dream was 1968, when, in today's dollars, the minimum wage was $10.77. Today's $7.25 per hour, which amounts to a mere $15,080 in annual income, falls short of the estimated $11 per hour needed to keep a family of four out of poverty. Regular increases in inflation over the past 40 years have outpaced Congress' dismal efforts to raise the federal minimum wage, resulting in today's workforce being paid two dollars less per hour than those in 1968, despite being many times more productive.

Of course, conservatives don't quite see it this way. In the words of John Boehner, "When you raise the price of employment, guess what happens? You get less of it," adding, "At a time when Americans are still asking the question, 'Where are the jobs?’'why would we want to make it harder for small employers to hire people?" According to the Bureau of Labor Statistics, the majority of states with higher than national unemployment also pay a rate higher than federal minimum wage. On the other hand, states with lower unemployment tend to use the lower, federal minimum wage, adding weight to the argument that, the higher the minimum wage, the higher the unemployment rate.

However, economists are split on the issue. While basic Econ 101 would defend conservatives' claim, according to Arindrajit Dube, a University of Massachusetts economist, "Outside of the simple Econ 101-type environment, increasing workers' pay can improve the functioning of the low-wage labor market." Research by the Economic Policy Institute, a vocal advocate for a minimum wage increase, claims that raising the minimum wage would create $85,000 new jobs and add $22 billion to the economy, largely by redressing the glut in consumer demand that's prolonged the recession. Maybe that's why national unemployment in 1968 (the last time the minimum wage made sense) rested at 3.6%, or less than half of what it is today. Raising the minimum wage might not be a magic bullet in the fight against poverty, but it's still a bullet in a time when we've lately been drawing blanks.