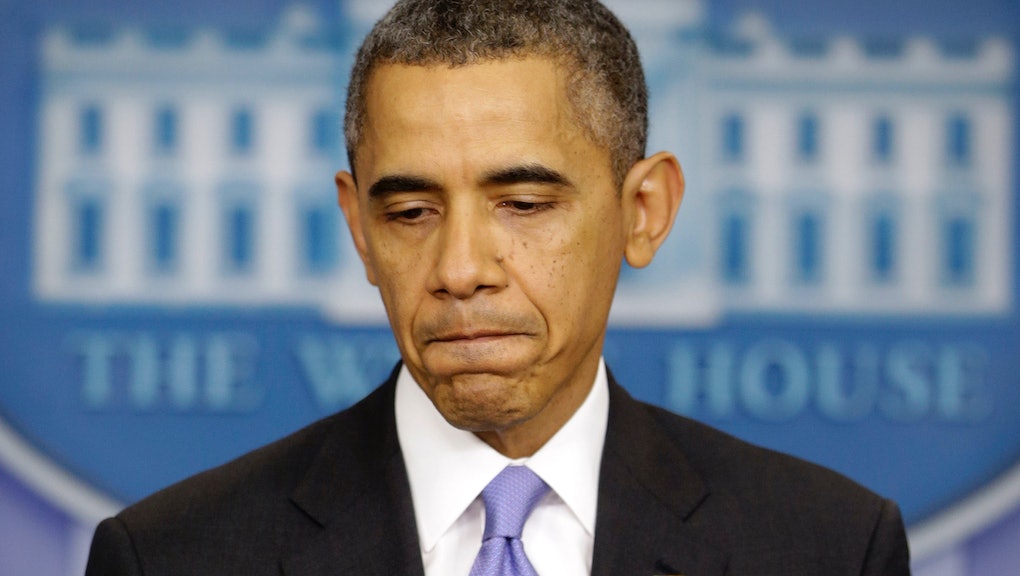 Despite his attempts at playing coy, President Obama must be looking forward to the end of 2013. The last 12 months were the worst of his presidency, characterized by a calamity of errors and his lowest-ever approval rating. But with such a low bar to surpass, there is also substantial reason to hope that 2014 will be a much better year for the president.

1. He has more distance from the controversies that damaged him

Time heals all wounds, or at least makes them sting a little less. Obama's presidency was marred by controversies in 2013. Benghazi, the IRS scandal, and Edward Snowden's leaks dominated the first six months of the year, leaving the president in a permanent state of damage control where little could be accomplished. However, going into the New Year, the president can hope to leave yesteryear's scandals in the past.

2. There won't be a government shutdown

In a year of political debacles, the government shutdown was the singing fat lady who failed to put the audience out of their misery. The epic disaster cost the country billions and focused public attention on the completely dysfunctional congress. Though the president did benefit from the self-mutilation of the Republican Party, the all-encompassing budget battle made it impossible to further any other legislative initiative. Fortunately, the two-year budget bill ensures that 2014 will not include a repeat performance.

3. His nominees have a smoother path to confirmation

4. There will be economic growth

The increased economic growth predicted for 2014 should give the president another chance to live up to his word. One of the Obama's original campaign promises was to strengthen America's faltering economy. Recent economic growth has suggested that his initiatives are working, but 2014 will present a greater opportunity for the president to work on curbing unemployment and strengthening the national recovery.

5. He'll have another chance at immigration reform

Amongst the many policy reforms that stalled out in 2013, the most devastating for the president were the failed attempts to pass gun control and immigration reform. From the beginning, Obama faced an uphill battle to pass reform for these extremely controversial issues, but the combination of political stalemates and scandals made it virtually impossible. However, 2014 presents a new and improved chance to pass reform.

6. Democrats are likely to retain control of the Senate

Looking forward to the 2014 midterm elections, political analysts have been predicting that Democrats will retain control of the Senate. Thirty-five Senate seats are up for reelection, with over 50% of the remaining seats controlled by Democrats (34:31). Early analysis of the critical elections suggests that Democrats will win in the all important purple states. President Obama will need the Democratic majority in the Senate in order to further the legislative goals that fell by the wayside in 2013.

7. Millions will enroll in Obamacare

Of course, one of the biggest disasters of 2013 was the healthcare.gov website roll-out. For reasons unbeknownst to the world, the federal government proved itself incapable of running an e-commerce website. As a result, far fewer people were able to enroll in a plan than was anticipated. However, the president has responded by pushing back the enrollment deadline multiple times, and 2014 should see a significant increase in enrollment. Hopefully, as more people enroll, there will be a shift in public opinion about the usefulness of the new health care law.

Two years ago, NATO leaders signed off on President Obama's plan to withdraw all U.S. led military forces in Afghanistan in 2014. With the end date finally approaching, international organizations are preparing for an unoccupied Afghanistan, while American families are preparing for the long awaited return of loved ones. For President Obama, the withdrawal should lead to a spike in his popularity. There is an undeniable joy associated with bringing service men and women home. President Obama should enjoy the upcoming opportunity to end American bloodshed abroad and reunite families at home.

9. Progress will be made in the Iran nuclear talks

For the first time in three decades, the United States and Iran have a real chance at making a lasting agreement. The current talks revolve around Iran's nuclear weapons program, specifically the country's capacity to enrich uranium. At this point, no agreement has been reached. But as the talks continue in January, Obama will hopefully find a reasonable compromise to fight nuclear proliferation.