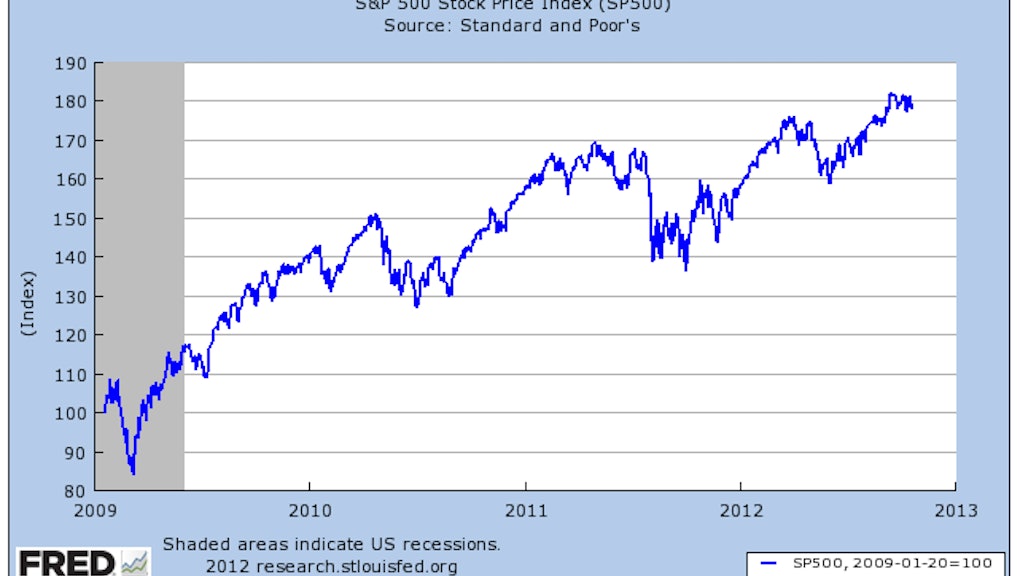 3 Charts Debunking the Myth That Obama is "Anti-Business"

President Obama is "hostile to business," the Weekly Standard said. "This is the most anti-business administration since Jimmy Carter," according to Sen. Mitch McConnell (R-Ky.).

The seemingly popular claim that President Obama is anti-business is a Republican fever dream. It is also unfounded and misleading. Obama has presided over massive growth in both stock values and the earnings of the richest Americans. Contrary to what the right-wing consortium says, the Obama administration has actually cut taxes for small and mid-size businesses 17 times.

Let's look at some numbers, shall we? The rich are getting richer and the poor are getting poorer as income inequality has rapidly accelerated under Obama. A ridiculous 95% of average income gains per family between 2009 and 2012 went to the top 1% of earners. The Federal Reserve's continued quantitative easing has provided large corporations the funds to "stay afloat" amid record-setting annual profits. If big business is suffering under this "punitively anti-business" president, then why are these numbers so high?

Also contrary to right-wing talking points, the S&P 500 Index is up 80% since Obama took office.

If Obama is dedicated to ending business as we know it, why are the facts pointing in the opposite direction?

These economic trends beg the question – where are the dozens of supposedly anti-business policies that Obama has made law? I see only Obamacare, which guarantees insurance companies millions of new customers without fixing our healthcare problem. I see a teetering auto industry bailed out, restructured, and on its feet again. I see a president saving capitalism from collapsing in on itself.

Paralyzed? Under President Obama, the profits of U.S. corporations grew a whopping 171% after taxes. Profits are now double their highest point in the Reagan administration, and their highest level ever relative to the size of the economy. Why are the lords of finance funding numerous anti-Obama publicity efforts when things have never been better for them?

The size of the public sector workforce is yet another area of supposed disagreement. "We are not losing government jobs. We are actually seeing an increase in federal government jobs," Rob Portman (R-Ohio) said.

Huh? Look at the table above, Mr. Portman. The Obama administration has actually reduced the total number of public employees while shifting jobs gains to the private sector. This data set even includes temporary 2010 Census hiring. Conservative accusations of anti-business scheming are just plain wrong, as President Obama continues to carry on numerous corporatist policies in place since the 1980s.

Don't pay attention to the surprisingly whiny business elite when they complain about a cash-starved government not shelling out more corporate welfare. These assorted executives and plutocrats are calling Obama "anti-business" all the way to the bank.