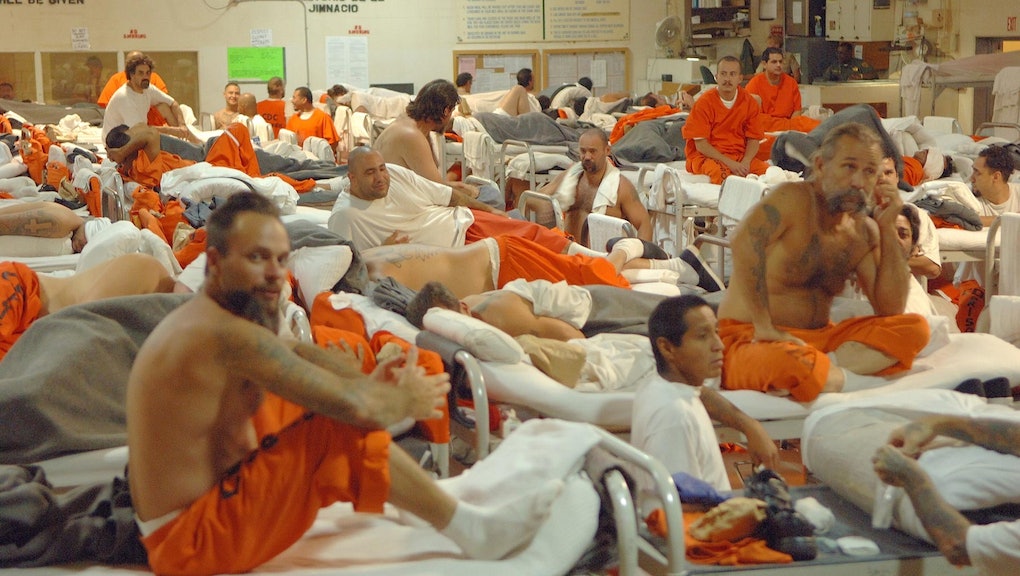 This is How California Can Fix Its Massive Prison Crisis

The state of California will miss its federally-imposed deadline to release 8% of its prison population — currently about 6,700 prisoners — by the end of 2013. As a result, federal judges have given Governor Jerry Brown an extension until April 18th, 2014.

The saga began in 2006 when U.S. District Judge Thelton Henderson ruled that oversight of the prison system was necessary after "an average of one inmate per week died as a result of medical malpractice or neglect." Five years later, in 2011, the Supreme Court declared the Golden State's system unconstitutional because it was tantamount to "cruel and unusual punishment." Steps have been taken in the right direction, but more reform will be necessary in the coming years.

In 1987, the incarcerated population was 67,000 inmates, and grew to almost three times that in 2007 with 171,000 prisoners. The LAO states most of the growth "occurred between 1987 and 1998 … this period was one of declining crime rates but also included the implementation of tougher sentencing laws and a prison construction boom."  Attempts to repeal or loosen the law over the years have been thwarted both by the legislature and the Terminator. But in November 2012, the people of California passed Proposition 36, which restricts the use of the three strikes law with nonviolent offenders.

The law exemplifies a central problem in the American justice system: We imprison far too many people for unreasonable lengths of time. When the United States has 5% of the world's population but 25% of the world's prison population, action must be taken to remedy this self-inflicted disaster. If the saying rings true, "As California goes, so goes the nation," then there are a few steps California can take to reduce the impact of its prison population and set a positive precedent for prison reform across America.

There have been different legal opinions surrounding the constitutionality of "three strikes laws." New York's laws against third-term felons was ruled unconstitutional under the Sixth Amendment, which guarantees the right to a trial by jury. However, in 2003, the Supreme Court rejected two suits on the grounds that third strike sentences were not disproportionate to the crimes committed. Since the sentences didn't qualify as cruel and unusual compared to others, they were deemed constitutional. Repealing these laws will allow for far more flexibility in the prosecution process, and will enable a more rational administration of sentencing times.

If there's anything positive that can be said about the Obama administration's Department of Justice, it's Attorney General Eric Holder's nudging of federal drug policy towards ending the War on Drugs. Such laws create an environment where the single largest driver in increasing the federal prison population since 1998 is longer sentences for nonviolent drug offenders. According to the above graph, California saw an increase in the number of prisoners while the incarceration rate remained steady.

End the War on Drugs

If there's any fix that will solve a compendium of problems, it's a world without cruel and unusual drug policy. While we shouldn't put heroin on the counter next to Plan B, the destructive impact of federal drug policy extends beyond the U.S. into Mexico. In Mexico, over 28,000 people have been killed since 2006 and 59% believe that the drug cartel is winning the war driven by profits on illicit marijuana in America. In America, generations of minorities have been imprisoned for nonviolent offenses, destroying families and costing the taxpayers $1 trillion in the process.

The people of California have the unique ability to make public sentiment become law through ballot initiatives. They took the right steps in 2012 by loosening the three strikes law and there are two more initiatives lined up for 2014 to push for the legalization of marijuana. When California does legalize marijuana, it has the opportunity to become a leader in reforming how prisons function after legalization.

There is no quick fix for the problems in Californian prisons, but prison reform will soon become mandatory. If they can continue to improve upon its reforms, California may even give D.C. a few ideas about fixing the federal prison system.