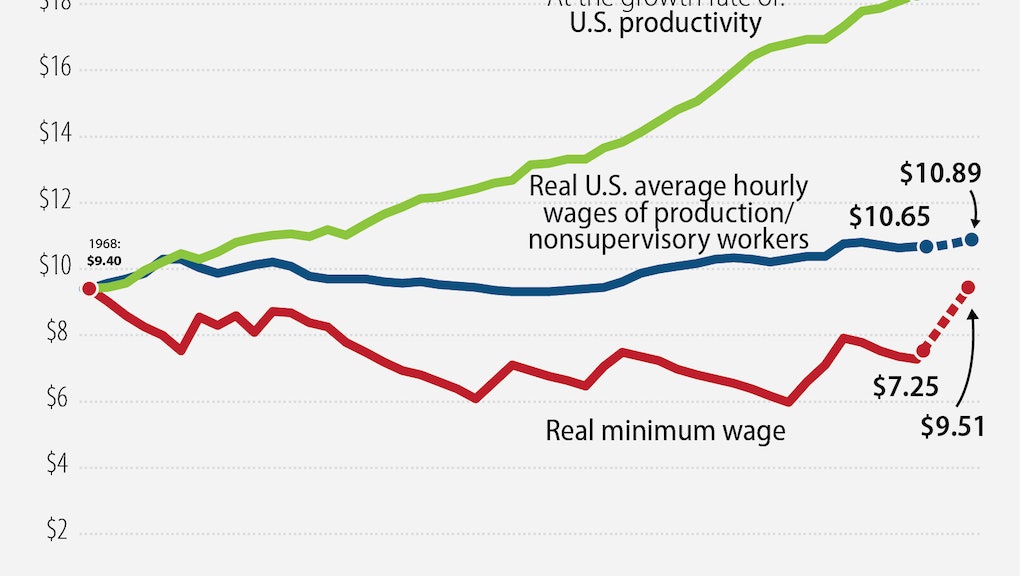 Income inequality was a major topic of discussion in 2013, but little action was taken to address the issue. Figures like President Barack Obama and Pope Francis played a major role in bringing greater attention to the income gap. Despite the inaction of the U.S. Congress, individual states have made strides in improving income disparity by increasing the hourly minimum wage starting on January 1, 2014. It is critical that new policies are introduced on a national scale in 2014 in order to further depress the rich-poor gap in America and raising the federal minimum wage is one way to do it.

In his apostolic exhortation, Pope Francis highlighted extreme poverty and condemned growing income inequality. President Obama has taken interest in the pope's message and even referenced the pontiff as part of his remarks on economic mobility. The pope's denunciation of trickle-down economics and unfettered markets could have a deep impact on U.S. politics. The GOP's current economic policies are at odds with those expressed by the leader of the Roman Catholic Church.

A Pew Research Center study shows that 75% of Democrats and 63% of independents believe the economic system favors the wealthy, while 55% of Republicans believe the current system is fair to most people. Looking at the numbers, it is clear that our current state needs fixing. According to research by Emmanuel Saez, an economics professor at University of California at Berkeley, the disparity between rich and poor has increased steadily since the 1970s. Startlingly, the current levels of inequality have not been seen since 1928. The GIF above shows the incredible rate at which the average income has increased dramatically for the top 1% compared to the bottom 99% of the U.S. population from 1917 to 2007.

Another method to measure income inequality is to look at the link between wages and productivity over the years. Productivity can fairly measure the "economy's potential for providing rising living standards." Wages and productivity grew in tandem from the end of World War II until the late 1970s. As shown in the chart below, productivity rose 63.8% from 1979 to 2012, while hourly compensation for ordinary (production and non-supervisory) employees rose only 7.5%. This discrepancy can be explained by the fact that output profits are largely going to CEO and supervisor earnings while ordinary employees' earnings remain stagnant.

Disproportionate earnings are contributing to the rich-poor gap, which will continue to grow unless action is taken. This year, a number of fast-food restaurant and retail employees went on strike across the U.S. to push for increased minimum wages. Corporations like Walmart and McDonald's faced sharp scrutiny for their hourly worker compensation policies.

The chart below demonstrates what the value of hourly compensation would have been had it rose at par with productivity. Currently, the federal minimum wage is $7.25 per hour.

Last year, Sen. Tom Harkin (D-Iowa) and Rep. George Miller (D-Calif.) introduced legislation, the Fair Minimum Wage Act of 2013, to raise the federal minimum wage to $10.10 in three incremental steps of 95 cents by 2015. The proposal accounted for automatic annual wage increases linked to changes in the cost of living starting in 2016 and would also increase wages for tipped workers. Since his State of the Union Address in February 2013, President Obama has remained committed to increasing the minimum wage — he recently expressed his support for the Harkin-Miller proposal.

Raising the federal minimum wage is one way to reduce income inequality in America. As Congress continues to stall, workers in 13 states will usher in the new year with automatic pay raises. According to the Economic Policy Institute, the 2014 wage increases will boost the incomes of an estimated 2.5 million workers in the U.S. The new year may bring smiles for a large number of low-wage workers, but millions will continue to face the woes of income inequality until Congress takes action.