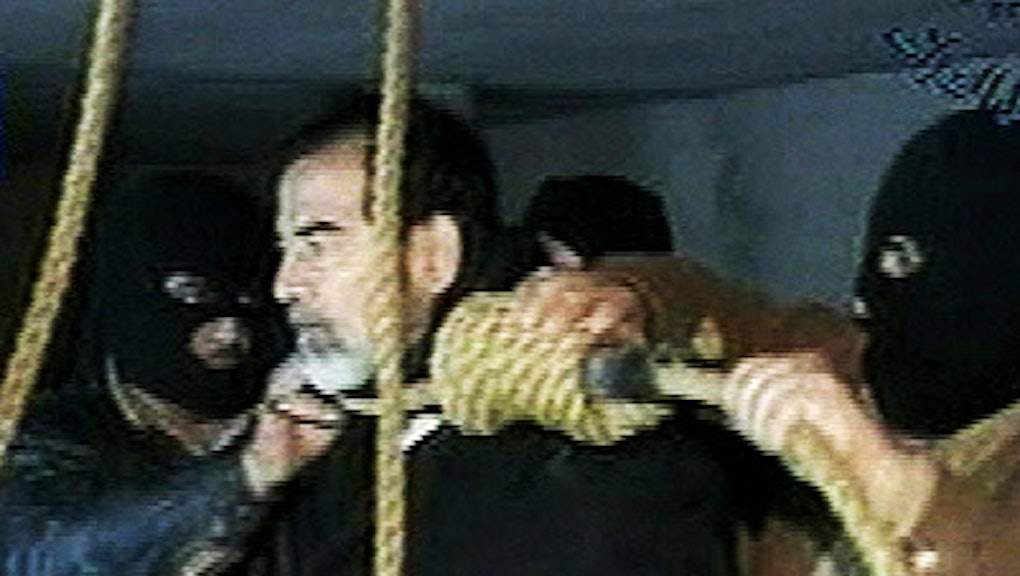 One of the earliest leaked, newsworthy cell phone recordings to go viral was of the December 30, 2006 execution of former Iraqi dictator Saddam Hussein. It revealed the potential of mobile phone recordings to undermine the official telling of news events.

Today, citizen-produced media content is integral to the news we consume, whether used in regular coverage or posted directly to a social media platform.  The photos and videos taken by ordinary people at scenes of violence, from the Boston Marathon bombing to chemical weapons attacks in Syria, shape how those events will be remembered by those of us who only saw the destruction from afar.

Rarely does one video totally alter the tenor of news coverage, however. The leaked cell phone video of Saddam Hussein’s hanging did just that, making it a notable moment in citizen journalism history.

The execution was a tale of two recordings: the controlled, stage-managed official video and the viral, leaked cell phone clip. They depicted the same event but with important differences that expose the promise and peril of mobile recording devices for changing how news is produced and consumed.

Iraq’s new government rushed the deposed tyrant’s hanging after a lengthy, controversial trial. If they thought it would help bring a cessation to the sectarian and factional fighting that wracked an Iraq under American military occupation, they were wrong.

Many saw the trial itself as corrupt, political theater. The conclusion of a guilty verdict seemed preordained. The fallen tyrant tried to use it as a podium for grandiose rhetoric. Critics of the war questioned the legality of the invasion that brought about the deposed leader’s trial.

However, the continued fighting was not clearly related to Hussein’s fate. There was historical score-settling, longstanding tribal and regional rivalries, shifting alliances with foreign actors, including the United States and Iran, and groups motivated by religion or ideology conducted campaigns of violence. They all made Iraq bleed.

Hussein’s execution proved to be but a hiccup in the complex civil war that embroiled Iraq in 2006-2007 and it still felt today. The country is being rocked by its highest levels of violence since 2007.

On the day of the hanging seven years ago, US helicopters flew Iraqi officials and witnesses who testified against Hussein to the site of the execution, an old military intelligence facility. It was the Hussein regime’s execution chamber.

The first video was the official one, taken on a professional grade camera. It was broadcast on networks around the world. The audio track, however, was not provided by the Iraqi government.

Less than 48 hours afterwards, someone leaked online a cell phone video of the execution. Whoever shot it was below, in front of the gallows, while the official cameraman was at the top.  Since the guests were made to give up their cell phones before entering, it had to be smuggled in.

This video circulated online after it was posted on the video website, www.anwarweb.net.

The poor quality recording is a reminder of how bad cell phone cameras were. Yet, the grainy and jerky two-and-half minute video proved to be the more potent and memorable of the videos.

The sound caught in the mobile phone recording told a very different story. The audio hinted at the deep sectarianism and lack of procedural care that made the hanging seem more like vulgar retribution than the outcome of a just and sound legal proceeding.

Some of those in attendance chanted “Moqtada” repeatedly.  This referred to a Shia political leader and cleric whose Grand Ayatollah father was gunned down in 1999, probably on Hussein’s orders.

When Hussein was hung, 1:40 into the video, the snap of his neck was audible, betraying a gruesomeness absent from the official clip. The on-looking officials and guards hovered over his body, shouting in celebration. Someone yelled, "The tyrant has fallen!"

The leaked video made for alluring TV. It was off-script and unmanicured, outside the desires of professional image managers.  It seemed real. The video went viral and news media had to follow.

Visit NBCNews.com for breaking news, world news, and news about the economy

Al-Jazeera showed an edited version. Soon, it was on the American networks that previously aired the official version.  American news anchors comforted viewers that it would stop short of the actual moment of the trap door’s release. Hordes went online to see the video unfiltered.

The stark differences in the two videos were quite apparent to ABC News's senior vice president at the time, Bob Murphy:

"It's a different angle on the same event. It has much more audio and ambient sound. They're clearly taunting him. It's a much more hostile environment than you get from watching the video this morning. The earlier video makes it seem much more passive and serene than it actually was."

It was seen as lacking the composed, disciplined ceremonial style of an official execution.

Some argued this leaked version benefitted Hussein. Michael Newton and Michael Scharf felt that the "taunting made Saddam appear somewhat stoic and dignified as his evil life drew to an end."  They argued that it let him appear more convincingly as the Arab nationalist hero of Iraq, the primary message of his defense during the trial.

Hisham Melham, of Al-Arabiya, said that the cell footage undercut the government’s narrative: “He was not trembling or in a state of panic as some Iraqi officials claimed him to be before the videos were released.”  It made Hussein “a sort of victim or martyr” and appear “more dignified than his executioner.”

After this execution video leaked, it generated new discussion about the execution. Vivian Salama wrote,“[t]he role of citizen journalists had never been so prominent as in the coverage of Saddam Hussein’s demise.”  The clip was discussed extensively in the blogosphere.

The leaked video was also compelling because of what it said about Iraq.  The country still suffers from broken legal and political institutions. It sees fighting along the same factional lines that came to the fore in the leaked video.

As John Burns of the New York Times said about the video:

“This whole event had the most terrible, ghastly -- I'm sorry to use the phrase -- beauty about it, in the sense that it told us so much, almost in a Shakespearean way, about all else that is happening in Iraq.”

The Lesson for Consuming News

Traditional news media from CNN to Al Jazeera seek such user-generated content. They encourage viewers to record events and upload the files that let them report more fully. They work to verify the content they receive, of course, to make sure the videos accurately depict what they claim.

The differential impact of these two videos shows that verification of videos does not erase subtle bias. Both quite accurately represented the same event, but the angles, lighting and audio were different enough to completely alter the meaning and reception of the video.

Big news stories, such as Mitt Romney’s presidential campaign rhetoric behind closed doors and the extracurricular activities of Toronto’s infamous mayor Rob Ford were spawned by these kinds of videos.

On the anniversary of Hussein’s hanging, it is worth remembering how a smuggled cell phone camera shattered the official story of the dictator’s final moments, and what it means for consuming leaked videos, or first-hand, amateur recordings today.